Hard to believe as it may be, the November 2020 Presidential Election is not the biggest story in Washington, DC as the New Year begins. Instead, America’s capital is gripped by the impeachment proceedings brought by the Democratic Party against President Donald J. Trump, on two counts, relating to the so-called ‘Ukrainegate’ scandal – abuse of power and obstruction of justice.

Even so, it seems unlikely that the Democrats will be able to turf their Republican foe out of office. They need a two-thirds majority in the 100-seat Senate for that and the Republicans’ 53 seats mean they can frustrate any impeachment vote with ease.

That should, barring any unexpected developments, mean that politicians, press, markets and voters alike can focus on the latest race to the White House. On 3 November 2020, Americans will get to vote for their next President, all 435 members of the lower House of Representatives and 34 of the 100 members of the Senate, the upper chamber on Capitol Hill.

The mid-term polls of 2018 offered some encouragement to the Democratic Party as they took control of the lower House of Representatives on Capitol Hill and there is still no shortage of Democrats looking to their shot at becoming President. Barack Obama’s Vice-President, Joe Biden, Vermont Senator Bernie Sanders (defeated by Hillary Clinton in 2016), Massachusetts’ Elizabeth Warren and South Bend, Indiana’s mayor Pete Buttigieg are leading the pack. The wild-card could yet be Michael Bloomberg, the billionaire who joined the race late in 2019, although his initial poll showings are fairly weak.

The first primaries for both the Democrats and Republicans will be held in early February and the process runs through to the party conventions - Milwaukee, Wisconsin for the Democrats in July and Charlotte, North Carolina for the Republicans. However, Super Tuesday in early March usually proves decisive.

When looking for the winner of the 2020 Presidential Election it is tempting to rely on the dictum laid down by James Carville, President Bill Clinton’s campaign strategist, when looking to the key issue that will shape the poll result: “The economy, stupid.”

It may not be quite that simple, because if it were the Democrats and not the Republicans would have won in November 2016, but President Trump is still pinning his Presidency on economic growth, as well as (related) hot-button topics such as immigration.

A downturn seems unlikely at the moment, although the rate of progress does appear to be less even, as the sugar rush of the December 2017 tax cuts wears off, the US Federal Reserve’s tightening of monetary policy in 2017-18 makes its presence felt, the dollar holds firm and corporations calibrate production and supply-chain planning in light of the President’s trade and tariff policies. 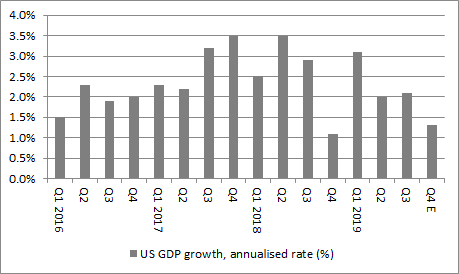 Investors continue to hope that the ‘trade war’ with China will be brought to an end in 2020 as Washington and Beijing reach some kind of agreement and there are some grounds for optimism here. In early December, both sides trumpeted a so-called ‘Phase One’ deal, which saw America postpone the imposition of a third round of additional tariffs on Chinese goods. China responded by scrapping plans to impose levies on 850 American products on 1 January 2020.

However, details of these agreements remain scanty and the key issue of intellectual property protection remains unresolved, so there is scope for many more Presidential tweets on this topic (beside many others) in the New Year.

This may be why the US Federal Reserve stepped in with three, one-quarter-point interest rate cuts in 2019, taking the headline US rate down to 1.75%, having begun the year with a plan to increase borrowing costs, not reduce them. After that policy pivot, Fed chair Jay Powell has now suggested that the central bank has now done enough and investors seem inclined to agree, as the CME Fedwatch tool shows that markets are pricing in more than a 54% chance of no change in the Fed funds rate in 2020. 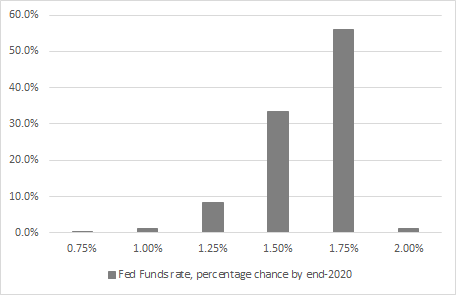 Whatever the merits of Fed policy when it comes to the economy – and supporters will argue that growth is still better than it is across most of the West, unemployment stands at 50-year lows and wage growth is solid enough at around 3% - there can surely be little doubt that lower interest rates helped to drive money back into the stock market in 2019.

The US stock market, as benchmarked by the S&P 500, provided a total return in sterling terms of 26.4% in 2019, enough to leave it ranked second of the eight major geographic options available to investors, behind only the surprise package that was Eastern Europe.

US equities did well again in 2019 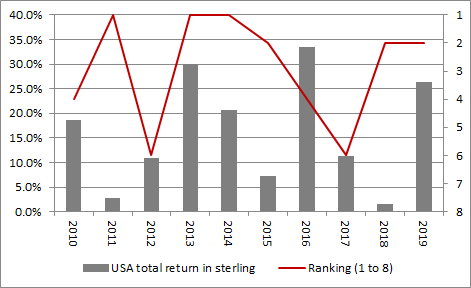 On the face of it, US equities still seem to have three things in their favour for 2020 and beyond:

The bear case on US stocks rests largely with valuation. Any shortfall in profits could leave US stocks looking exposed, especially as Professor Robert Shiller’s cyclically-adjusted price earnings (CAPE) ratio puts the S&P 500 on a multiple of 30.9 times. That rating has only been exceeded twice for any period of time, in the late 1920s and the late 1990s, and neither of those episodes ended too well, as if to support the old maxim that markets are never at their most dangerous when making money looks easiest.

END_OF_DOCUMENT_TOKEN_TO_BE_REPLACED
The value of your investments can go down as well as up and you may get back less than you originally invested. We don't offer advice, so it's important you understand the risks, if you're unsure please consult a suitably qualified financial adviser. Tax treatment depends on your individual circumstances and rules may change. Past performance is not a guide to future performance and some investments need to be held for the long term.