He has made it. No sooner had Prime Minister Shinzō Abe overseen Japan’s successful stints as the host of both the G20 meeting in Osaka and the Rugby World Cup than he bagged another glittering prize. The Liberal Democratic Party’s (LDP) leader became his country’s longest-serving modern-time Prime Minister in mid-November 2019.

With this local milestone behind him, Abe and Japan will put themselves at the centre of the world stage when they welcome the XXXII Summer Olympiad from 24 July to 9 August and then the XVI Paralympic Games from 25 August to 6 September.

Source: Asahi Shimbun and Nikkei newspapers. Dates span all periods in office which may not have been consecutive.
* As of 25 October 2019.
** Abe will become the longest-serving PM of all time on 19 November 2019.

However, for all of his triumphs, the clock is still ticking on the Abe era. He has already bent the LDP rules once, when a change permitted him to stand for the party presidency for a third, three-year spell in 2018. He will not stand for a fourth time in September 2021 and the race to take over his mantle is already underway.

One of the early front-runners seems to be Shinjiro Koizumi, son of another titan of the LDP, Junichiro Koizumi, who was Prime Minister between 2001 and 2006. Other possible candidates include the new Foreign Minister, Toshimitsu Motegi, who continues to work on trade relations with America and his predecessor, Taro Kono.

Those LDP rivals will have an eye on the next General Election, too, as that is due to take place by October 2021 at the latest, just a month after Abe’s final three-year term at the helm of the party comes to an end.

The political situation in Japan may seem relatively straightforward, given the hegemony of the LDP-Komeitō coalition, but the economic outlook remains much more cloudy, even after nearly seven years of ‘Abenomics’ and nearly three decades of ultra-loose fiscal and monetary policy.

On a headline basis inflation continues to run stubbornly below the BoJ’s 2% target and GDP growth remains patchy.

Bank of Japan continues to downgrade its GDP forecasts 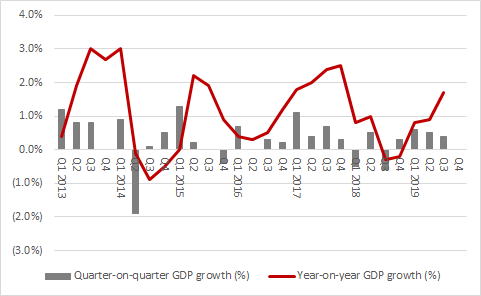 It is possible to argue that Japan’s economy is actually doing very well, given the number of obstacles that it faces, including the loss of the bulk of its supply of cheap nuclear fuel; a currency which has rallied by around 15% against the dollar from its low of almost ¥126 to dollar in 2015; a string of natural disasters, including earthquakes and typhoons; and global trade tensions, which are seemingly starting to hit the world’s economy and therefore Japanese exports.

Another burning issue for the Japanese economy is October’s increase in Consumption Tax (the local equivalent of VAT) to 10% from 8%. This had been postponed twice in October 2015 and then April 2017, amid worries over the impact on Japanese consumers and the broader economy. Japan fell into a recession after an increase in 2014 and also the previous increment, to 5% from 3% in 1997, a development which led to the LDP losing control of the House of Councillors in a disastrous 1998 election and cost then party leader and PM Ryutaro Hashimoto his job.

Japan needs the money because its national debt is huge, at just under $10 trillion or 238% of GDP, and its demographics are terrible, so funding that debt is going to get harder, not easier.

This is one reason why the Bank of Japan is itching to see wage growth and inflation to help it manage its debt pile. But a headline inflation and core inflation rate of 0.5% represent a poor return on the BoJ’s unorthodox monetary policy whereby, under Governor Haruhiko Kuroda,

Japan continues to run QE to infinity and beyond 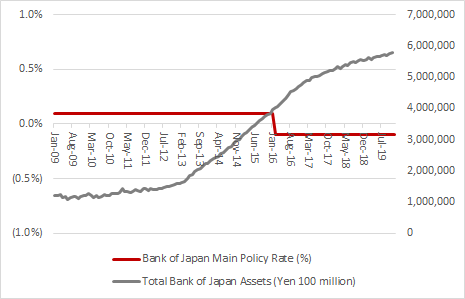 The BoJ’s problem seems to be that workers and consumers in Japan are becoming accustomed to low inflation and that changing this mind-set is proving very difficult. That is a problem when you need to inflate away your debts and it explains why Western central banks are already twitching after barely two years of tightening monetary policy in a very mild way in the US and UK and nine months of it in Europe. This is why Japan is where no central banker wants to end up, at least economically-speaking.

While the economic benefits of the Olympics and Paralympics are likely to be debated for some time to come, investors may feel that the benefits of the ‘Three Arrows’ of Abenomics are more tangible. Helped by seven years of the programme, Japan is the second-best performer of the eight geographic options outlined in this document, in sterling, total-return terms over the past decade, helped in part by a respectable fifth in the 2019 rankings, as the Tokyo market handily outpaced emerging arenas.

Japan was the fifth best regional performer in 2019 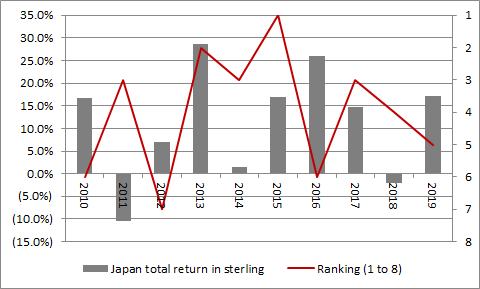 Source: Refinitiv data, based on the Nikkei 225 index. Total returns in sterling terms.

Global trade tensions and growth worries may well have crimped performance, however. The Tankan – or the Business Short-Term Economic Sentiment Survey to give the quarterly survey of industrial confidence its full name – has ebbed to its lowest level since the first quarter of 2013 for large manufacturers and since Q2 2017 for all companies.

Confidence peaked on both measures in late 2017 and this has perhaps held back the Nikkei 225 index. Although correlation is by no means indicative of causation, it can be argued that where the Tankan goes the Nikkei stock index follows over time – although the stock index is trying to think more positively at the time of writing, as hopes for a US-China trade deal and looser monetary policy around the world are helping share prices to rally even as corporate confidence continues to slide. 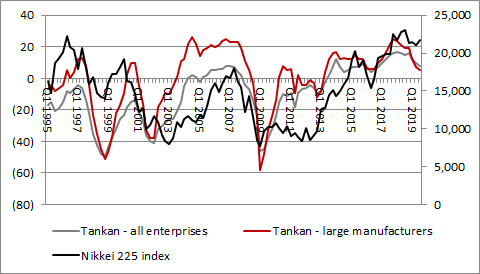 Cineworld suffers from lack of major releases, and Pets at Home trading ahead of expectations

How to invest in structural change on a global level

END_OF_DOCUMENT_TOKEN_TO_BE_REPLACED
The value of your investments can go down as well as up and you may get back less than you originally invested. We don't offer advice, so it's important you understand the risks, if you're unsure please consult a suitably qualified financial adviser. Tax treatment depends on your individual circumstances and rules may change. Past performance is not a guide to future performance and some investments need to be held for the long term.