Brexit can already lay claim to the scalp of two Conservative Party Prime Ministers, in the form of David Cameron and Theresa May, although Boris Johnson’s General Election victory in December looks to reduce the chance of him becoming the third, at least in the very short term. Like him or loathe him, financial markets seemed pleased at least to welcome a clear-cut victory for the Conservatives as it broke the two-and-a-half-years of political paralysis that had followed the 2017 ballot, which left Theresa May and the Tories juggling a minority Government that was reliant on the support of the Democratic Unionist Party.

With a crushing Parliamentary majority of 80, Johnson has a mandate for action. However, the Prime Minister must now deliver on his promise to ‘get Brexit done’, as he puts it, to preserve his Government’s legitimacy and its new-found support in the north of England if nothing else. The hard work will only begin after the UK’s withdrawal from the EU, which is set for 31 January after the passing of the Brexit bill in December.

The Government will now look to forge new trade deals around the world and the clock is already ticking toward the end of the so-called transition phase in December, so markets are likely to following the negotiations between London and Brussels with trepidation.

The implications for the economy are potentially significant but it may be easier than investors think to paint a fairly upbeat picture. Business inventories should finally be given chance to normalise in the wake of the Brexit deadline, the Government is (if you take its election promise on trust) drawing up expansive spending plans designed to boost growth, wage growth is healthy and the pound is cheap enough to potentially give exports a boost.

At first glance, however, the omens for the UK economy do not look not great. The latest purchasing managers’ indices showed weakness in manufacturing, an ongoing slump in construction and a stalling of activity in the dominant services sector. All three readings came in below the 50 mark, to potentially warn of a slowdown ahead. 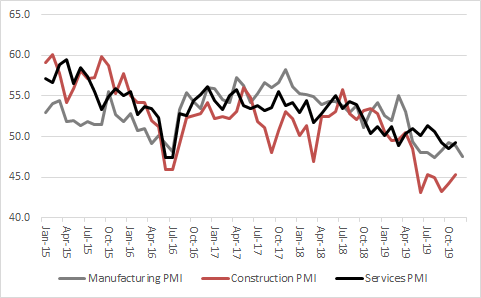 Whether this is down to Brexit or a wider global slowdown is not easy to divine, although the situation may not be quite as bleak as those immediate headlines suggest. From an accounting perspective, GDP equals:

consumption plus investment plus Government plus exports minus imports.

Looking briefly at the trend in each should therefore be informative. 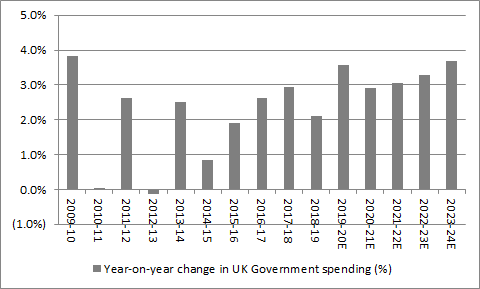 The UK’s fortunes cannot therefore be seen in isolation and the issue of global growth may yet be the most important of all, at least from a stock market perspective, since around two-thirds of the FTSE 100’s revenues come from overseas.

The FTSE 100’s global spread helps to explain the almost Pavlovian response that the index offers whenever sterling moves. Since the EU referendum vote, a weaker pound has tended to help the index go higher and a strong one has generally held it back.

Sterling remains a wild card, although the Bank of England, for the moment at least seems disinclined to defend it. December’s Monetary Policy Committee vote was 7-2 in favour of leaving the base interest rate unchanged at 0.75%. The two dissenters called for a rate cut, so at the moment the next movement is more likely to be down than up, in keeping with trends across most of the developed world. 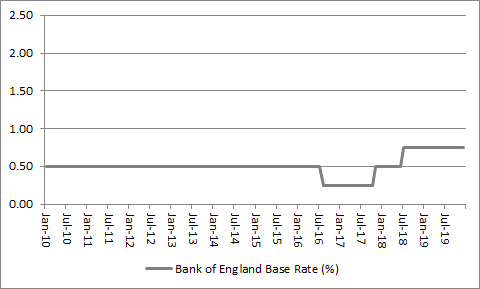 That may help to drive cash toward the UK equity market and patient contrarians already trying to make a case for increased portfolio exposure, for all of the concerns about Brexit, domestic politics and even global geopolitics. The UK has persistently underperformed over the past decade, not just in the three years since Brexit, in total return, sterling terms. It has contrived to outperform emerging markets, but not developed ones.

UK equities have been persistent underperformers this decade… 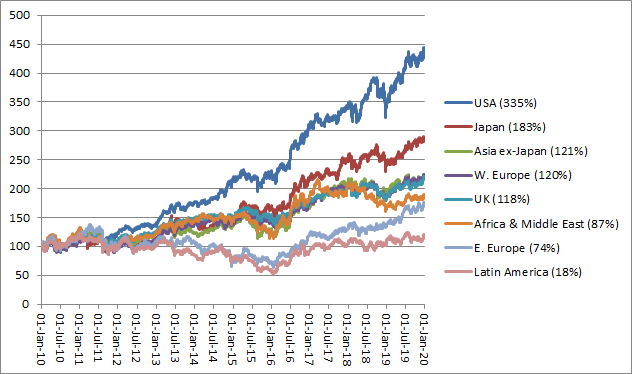 Despite a post-election, year-end rally this trend was not entirely broken in 2019 when the UK ranked fourth out of the eight major geographical options that are available to investors, even if that was the best relative showing since 2014.

On a total-returns, sterling-terms basis, the FTSE All-Share lagged the equivalent benchmark indices of Eastern Europe, the US and Western Europe, pipped Japan and easily outperformed Asia, Latin America and the Africa-Middle East region. 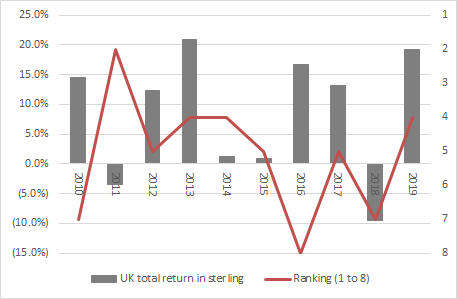 This does at least leave UK equities looking cheap relative to their international peers and to their own history on just 12.6 times forward earnings for 2020, with a dividend yield of 4.7%. That dividend yield in particular may catch the eye of income-seekers, as it is the highest figure on offer from any of the eight major geographic equity market options and represents a premium of nearly four hundred basis points (or four percentage points) relative to the benchmark 10-year Gilt yield.

The danger is that the forecasts upon which those metrics are based turn out to be no good. Thankfully, the aggregate consensus analysts’ forecasts for 2020 do not look unduly aggressive. They call for

Granted, if the UK economy slips into an unexpected recession, and is joined there by, say, the USA, then such figures are likely to prove wildly optimistic. Equally, the numbers could prove to be too low if the British and global economies prove more resilient than the current consensus amongst analysts and economists would have us believe.

END_OF_DOCUMENT_TOKEN_TO_BE_REPLACED
The value of your investments can go down as well as up and you may get back less than you originally invested. We don't offer advice, so it's important you understand the risks, if you're unsure please consult a suitably qualified financial adviser. Tax treatment depends on your individual circumstances and rules may change. Past performance is not a guide to future performance and some investments need to be held for the long term.