“A mild profit warning from Microsoft and reports about job cuts at Tesla will hardly be welcome headlines for investors in growth stocks as they return from the long holiday weekend, whereas those who own a lot of oil shares may be pleasantly surprised to see crude prices staying firm despite OPEC’s promises to increase output,” says AJ Bell Investment Director Russ Mould.

“The contrast could hardly be greater and while financial markets continue to obsess about interest rates and Quantitative Tightening, oil is the biggest issue around right now, not least because central banks cannot print crude so any influence they have is limited to demand, and not supply.

“Oil stocks are responding to this dilemma for policymakers by marching higher. Shares in Shell and BP are both back to pre-pandemic levels and Shell is nudging toward its prior all-time peaks (even if BP is some way short of that). 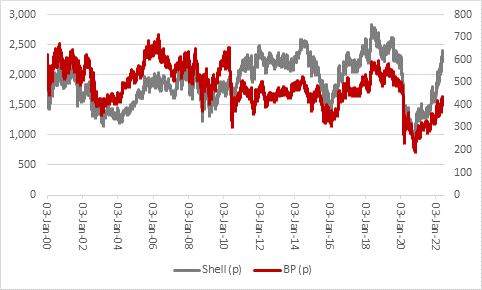 “But when oil stocks are studied in a wider context, it seems as if investors do not really believe that crude will remain in the ascendent for too long, possibly in the view that the long-run move away from hydrocarbons to alternative, renewable sources of energy is still on track.

“The market valuation of oil companies still represents only 11.3% of the FTSE All-Share’s market capitalisation, compared to historic highs north of 20%, when oil also traded consistently above $100 a barrel. 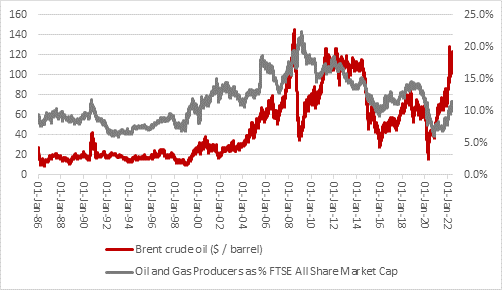 “Oil stocks also seem to be relatively out of favour in the USA, where their profile, as measured by their percentage of the overall stock market’s valuation, is still languishing near historic lows.

“In the USA, the major oil producers command an aggregate market capitalisation which represents just 2.4% of the S&P 500 index’s total $35 trillion price tag. Granted, that is a big leap from the lows of autumn 2021 but it is barely a quarter of the highs seen in the middle of this millennium’s first decade. 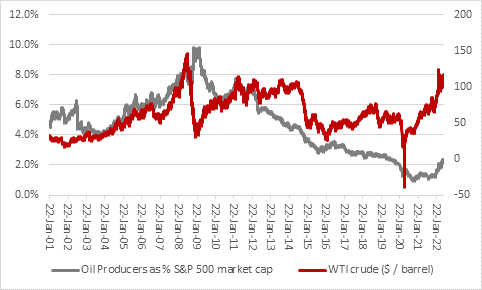 “This is in stark contrast to the market’s apparent ongoing love affair with technology stocks, even though profit warnings are piling up and more major companies are putting on hiring freezes or even cutting staff – strategies which are not associated with growth at all.

“The US Information Technology sector did not quite reach its prior peak at around 35% of total S&P 500 market cap this time around. That may be no bad thing, given how badly that 1998-to-2000 surge came to grief in 2001 to 2003’s bear market, but tech still reached 30% during the pandemic as some investors decided it was the only story in town. Tech’s loss of favour may feel uncomfortable for many, but its reversal of fortune still looks minor compared to the rout of twenty years ago. 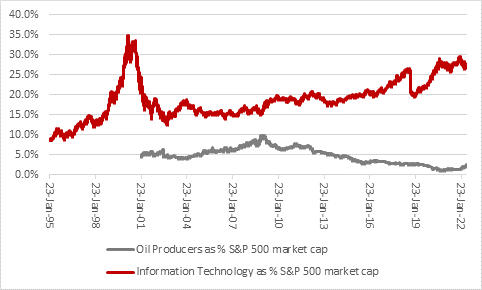 “Growth-oriented investors may be of the view this is just a blip, but they may need to at least consider the words of money management legend, Ray Dalio, the founder of Bridgewater. Never backward about coming forward, one of Mr. Dalio’s best-known comments is, “The biggest mistake that investors make is to believe that what happened in the recent past is likely to persist. They assume that something that was good investment in the recent past is still a good investment. Typically, high past returns simply imply that an asset has become more expensive and is a poorer, not better, investment.”

“Whether this is a trap that awaits investors now remains to be seen but they need to ponder another strategic issue at the same time, at least if the techniques of another hugely successful money manager are any guide.

“Bruce Kovner may not be the best-known hedge fund manager in the world but, as the founder of Caxton Associates, he is one of the most successful. He gives little away in public, but it is worth tracking down his few pronouncements and one favourite is his comment, “What I am really looking for is a consensus the market is not confirming.”

“The crunching falls in many tech stocks would perhaps lead investors to think the consensus is bearish, just as oil shares’ ongoing resilience, even in the face of the UK’s 25% windfall tax and OPEC’s output policy shift, would give the impression that everyone is bullish on oil stocks.

“But the historic trends in market capitalisation and relative valuation across these sectors, and their relative weightings now, would suggest that may not be the case. It is possible to argue that technology still feels loved and, by contrast, that oils still feel reviled.”