Would-be buyers on the dip face their next test

“The VIX, or ‘fear index,’ trades near 30 and CNN’s Greed and Fear index at just 12, so with near-term sentiment seemingly washed out this could be a key test of investors’ appetite for buying tech and meme stocks and cryptocurrencies on the dip, a tactic that has served them so well since the market bottom reached in the wake of the Great Financial Crisis in spring 2009,” says AJ Bell Investment Director Russ Mould.

“However, history would suggest that caution is needed. No fewer than nine major rallies produced an average gain of 23% during technology stocks’ last major fall from grace and all they did was expose buyers to a fresh mauling from a bear market as the NASDAQ plunged by 78% from its March 2000 peak of 5,049 to its October 2002 low of 1,114.

“Two rallies produced gains of more than 40% and one of more than 30%, but still buyers were lured to their doom as the combination of lofty valuations, high expectations and earnings disappointments proved too much for share prices to shake off. 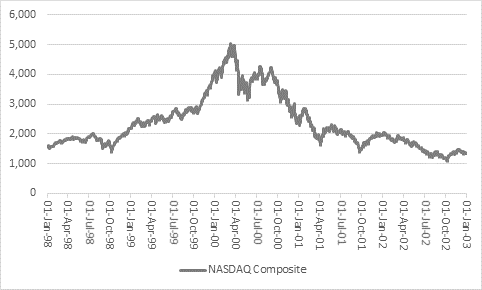 “Students of market history will also note how only one rally reached the previous peak and every subsequent retreat set a fresh low, to gradually beat any positive sentiment out of dip buyers. Bulls of the US equity market, and NASDAQ and tech stocks in particular, will therefore be hoping that new sequence of lower highs and lower lows does not establish itself or there could indeed be trouble ahead. 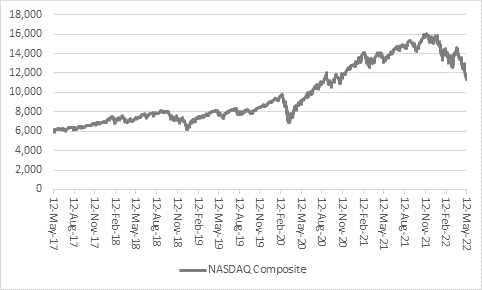 “Nor is there any guarantee of help from the US Federal Reserve, at least just yet. The Fed’s main preoccupation now seems to be inflation and how it is impoverishing Americans. Any talk of holdings interest rates at record lows and using Quantitative Easing (QE) to try and drive asset prices higher to create a feelgood factor and wealth effect has long since dried up. If anything, the Fed now seems content to let asset prices slide and perhaps use this as a tool for cooling the US economy, although how long chair Jay Powell and the Federal Open Markets Committee’s nerve holds remains a matter of heated debate. 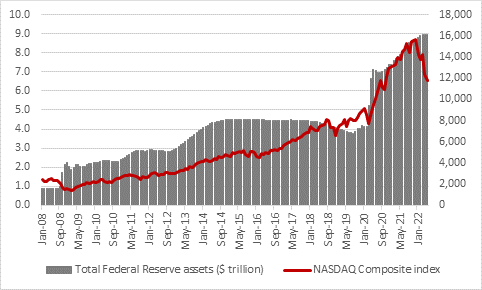 “On that occasion bears did indeed decide to ‘fight the Fed’ – and they won, again because the NASDAQ’s gallop higher had left valuations so stretched, encouraged so many new firms to list and set expectations so high that eventually stocks could not sustain their price tags, new issuance swamped would-be buyers and earnings failed to live up to their billing.”