Supply chain problems, higher raw material prices and higher shipping and fulfilment costs have been compounded by drop in demand for crafting in the USA as lockdowns have eased and Americans have got out and about again. As a result, management expects profit margins to materially undershoot expectations and is cutting the second-half dividend to zero. 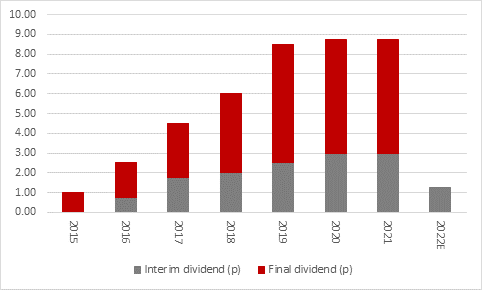 Back in October, management had suggested that adjusted operating margins could drop by around two percentage points, rather than rise by more than one percentage point as analysts had been expecting. Chief executive Paul Fineman now believes that IG Design will only break even in terms of adjusted operating profit in the 12 months to March 2022, so the return on sales is now expected to be zero, compared to 4.8% in fiscal 2021. 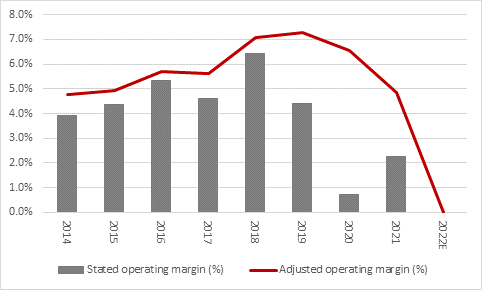 It also means that adjusted operating profit will drop from $42 million in fiscal 2021 to nil in the year to March 2022. That helps to explain why the shares are down so sharply, although it is less clear why IG Design’s second major profit disappointment is such a big surprise.

The drop in crafting sales is another sign of how businesses that boomed during the initial waves of the pandemic and lockdowns are seeing a slowdown in demand now as consumers become more mobile and spend their money elsewhere – Netflix and Peloton are other, high-profile examples. Moreover, supply chain problems, higher freight costs and higher raw material and wage costs are not news as such, although the manner in which they are persisting will concern shareholders, economists and central bankers alike.

This goes to show how careful investors must be when gauging the impact of higher inflation upon businesses and how they are able to cope and defend their profit margins – or indeed whether they are able to defend their profit margins, because in this case IG Design is finding it hard to cut costs or raise prices quickly enough to cover the input inflation.

The company’s operating margins were already pretty thin – 4.8% on an adjusted basis and 2.2% on a stated basis – and provided little protection in the event that anything unexpected went wrong.

And it is just possible that today’s profit alert has its origins in the 2018 purchase of the American business Impact Innovations, for an upfront price of £56.5 million in cash, supplemented by a £15.4 million share award to the purchase’s then CEO John Dammermann and his wife and a £27.9 million investment in stock and working capital, for an all-in cost of just under £100 million.

The rationale of the deal looked clear. Enhanced scale and market share in the US, the chance to cross-sell to giant retailers such as Wal-Mart and Kroger and a targeted $5 million in cost efficiencies within three years all looked supportive of analysts’ view that the transaction would be help to increase profits going forward.

The subsequent purchase in 2020 of America’s CSS Industries for £90 million, including debt, further broadened IG Design’s range of customers and products but the purchase of Impact Innovations also brought with it two potential dangers, both of which may now have come crashing home.

First, Impact’s seasonal décor business meant its revenues and profits were more seasonal than those of IG Design, with a huge slant towards Thanksgiving and Christmas in the calendar fourth quarter, which traditionally generated some 85% of Impact’s annual sales. In this respect, any supply-chain disruption could have hardly come at a worse time, even if CSS’ focus on every-day gifting meant 43% of total group sales came at Xmas in fiscal 2021, down from 56% the year before.

Second, Wal-Mart represented around of fifth of IG Design’s sales following completion of the deal in 2018. This may well have been a good thing in terms of the volumes but it did leave IG Design to negotiate with a much, much bigger firm on issues such as volume and price and the British firm may have started to find it hard to recoup higher costs as a result, especially as other major customers include Tesco, Lidl and Carrefour, all of whom are likely to use their scale and market share to drive a hard bargain. Two-thirds of sales come from 20 customers, many of whom will be a lot bigger than IG Design.

Since IG Design outsources around two-thirds of its product, that could leave the firm as the meat in the sandwich between its suppliers and its customers, something which could be pressuring margins and the root cause of the big profit disappointments.

Mr Fineman’s admission that IG Design is going to review its priorities and plans in the USA shows that the acquisitions are ultimately failing to deliver, although the statement also notes the Board remains convinced the overall strategy is still correct.