Why has the UK stock market done so badly since the 2016 Brexit vote?

Why has the UK stock market done so badly since the 2016 Brexit vote?

Whatever their views on the political, economic and social rights or wrongs of Brexit, and whatever their views on the Government’s latest negotiating tactics and Parliamentary manoeuvrings on the topic, all investors have no choice but to agree on one thing – the UK equity market has been a terrible performer since the Brexit vote on 23 June 2016.

On a total returns (including dividend reinvestment) in sterling terms, the UK – as benchmarked by the FTSE All-Share – has been an absolute hound, failing to beat any of the other six major geographic options available to portfolio builders. A 13.3% total return lags not just the USA (which would have doubled investors’ money), but Japan, the Asia-Pacific, Eastern Europe, Western Europe and even Latin America, which has been beset by weak commodity prices, an Argentina debt default and volatile politics in key markets such as Brazil.

Sterling’s post-Brexit plunge does serve to inflate the returns on offer from overseas markets but even in local currency terms the UK fares little better, outperforming only Latin America and trailing everywhere else. 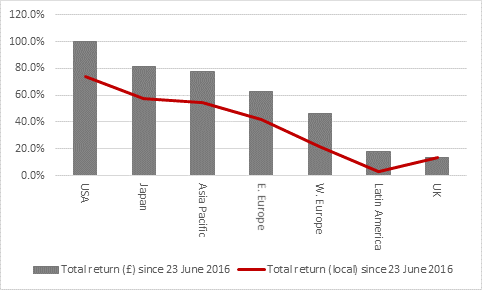 However, the past is the past and stock markets are about harvesting future returns. The good news is that the UK has underperformed, has been unloved and could therefore have become too cheap, something which may attract contrarian bargain hunters. But investors will still need a potential catalyst that will make investors view UK equities in a more positive way to stimulate buying and unlock any value that may be there and here they can start by looking at why it may have done so badly over the past four years or so and whether those issues will go away.

The transition period is due to end on 31 December and the UK will then leave the EU, under the terms of the October 2019 Brexit Withdrawal Agreement. At the moment, the UK and EU seem no closer to striking a new agreement on trade and movement of people, goods and capital, with fishing rights, state aid and the border between Northern Ireland and the Republic of Ireland all key sticking points. If the UK and EU fail to reach a new deal, then trade between the two will done under World Trade Organisation rules from 1 January 2021. This is likely to mean border checks and more frictional costs, tariffs on imported and exported goods and potentially restricted access to EU markets for services. Financial markets do not like the sound of any of this and fear an economic hit to the UK under this scenario, even if Brexiters assert such concerns are overdone because Britain already has new trade deals with Japan and Switzerland, to name but two, and is negotiations with America, Australia and New Zealand. New trade deals here which give access, perhaps even on a preferential basis relative to the EU, would ease markets’ fears over Brexit and what it might mean, as would a last-minute compromise with the EU itself.

It is possible that some of the UK’s underperformance is due to market perception of how the country has handled the Covid-19 crisis (although America’s struggle to contain the pandemic does not seem to have unduly hobbled its stock market). Since 21 February, when financial markets began to really take the virus seriously, the UK has again badly lagged its global peers and the strong performance of Asia and Japan in particular is interesting in this context. In the wake of SARS in 2003, it is possible that Asia was better prepared for a pandemic and acted accordingly, even if South Korea has still found itself having to try and stamp out fresh local outbreaks. 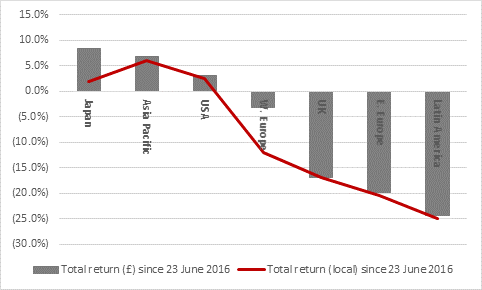 The strong performance of America’s S&P 500 in 2020 stands out, but appearances can be a little deceptive. America’s broad benchmark is actually no higher than it was in January 2018 once you strip out the $3.3 trillion gain in market value generated by Facebook, Alphabet, Amazon, Apple, Netflix and Microsoft. That sextet is now worth a quarter of the S&P 500 index on its own, up from 11.3% on 23 June 2016 when Brits when to the Brexit poll both. As such, America’s stock market has benefit from the exposure it offers to technology stocks in particular, an area where the UK is rather lacking, despite Avast’s promotion to the FTSE 100 in June 2020 and AVEVA and Just Eat Takeaway.com making it into the UK’s top flight in 2019.

Instead, the FTSE 100 is packed with oils, banks, insurers and miners – all of whose profits are fiendishly difficult to forecast and all of whose fortunes are under pressure from regulators, the economic cycle, the pandemic or all three. The trend toward Environmental, Social and Governance (ESG) investing does not help the oils or miners either, despite BP and Shell’s announcement of plans to reinvent themselves so they can adapt to a zero-carbon world.

What would help, however, would be a strong, inflationary recovery. That could force bond yields and interest rates higher, helping banks’ net interest margins, demand for metals and possibly even oil, at least in the short term. Such a scenario would favour cyclical, ‘value’ sectors such as these. It would also potentially lure investors away from technology and growth stocks. After all, if cyclical growth is plentiful and easy to find among cheap, value names, investors do not need to pay a scarcity premium for growth stocks, as growth would no longer be scarce. In addition, rising interest rates (thanks to inflation) would mean that jam-today, profit-tomorrow stocks whose profits and cash flows are currently fancied mushroom long into the future (think Netflix or Tesla or Nikola) would see their future cash flows discounted back at a higher rate in discounted cash flow models (DCFs), thus lowering the theoretical value of their equity.

The prospect of further weakness in the pound is a potential deterrent to overseas investors, who may be worried about losing some of the value of their investment to currency movements. Equally, a fresh sharp fall in sterling would increase the value of foreign holdings for domestic, UK-based investors. Any investor who fears that the pound will go through the floor might therefore like to think about parking more of their money in overseas markets.

However, a sharp fall in the pound could act as a shock absorber for the economy, making British exports cheaper relative to the competition, make assets look cheaper for overseas buyers (hence the wave of foreign bids for British firms in the wake of the 2016 Brexit vote), and also boost the earnings power of UK-listed firms that make most of their revenues and profits abroad. 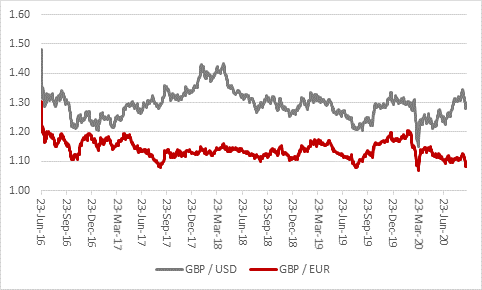 A Brexit agreement with the EU that outlines clear policies for trade in goods and services, and resolves the question of the Northern Irish border, would probably be the best outcome for markets, although that leaves investors relying on a classic last-minute EU compromise, the kind of which used to characterise the economic bloc’s handling of the Greek economic crisis in the early stages of the last decade.

Any fall in sterling which follows any failure by London and Brussels to reach a deal could provide some support to UK stocks, although it would augment the value of investors’ overseas assets much more quickly, possibly worsening the UK stock market’s performance against other geographic options in the very near term.

The greatest boost of all over time would probably come from inflation and an economic upturn, not least because they look so unlikely at the moment. Such an event could give UK plc’s earnings power a substantial boost – providing inflation didn’t get too out of hand.

Will there be a Santa Rally?

END_OF_DOCUMENT_TOKEN_TO_BE_REPLACED
The value of your investments can go down as well as up and you may get back less than you originally invested. We don't offer advice, so it's important you understand the risks, if you're unsure please consult a suitably qualified financial adviser. Tax treatment depends on your individual circumstances and rules may change. Past performance is not a guide to future performance and some investments need to be held for the long term.