“With a market cap of just £16 million, packaging play Robinson may not be a household name but its profile may go up a notch or two after its decision to reinstate dividend payments,” says Russ Mould, AJ Bell Investment Director.

“The company joined AIM in 2004 and had always made a dividend payment of some form or other until the board felt obliged to cancel the final, or second-half, payment for 2019 owing to the uncertain economic outlook in the wake of the viral outbreak. 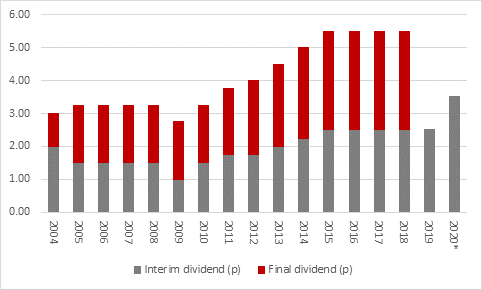 “The last dividend cut of any kind came in the wake of the Great Financial Crisis in 2009 and Robinson rebuilt the payment very quickly so shareholders and income-seekers more generally will be hoping for a repeat this time around.

“As part of its annual general meeting statement the company, which has facilities in Derbyshire, Nottinghamshire and Poland, has declared what is calls a first interim dividend of 3.5p a share, to make up for the cancellation of the 2019 final distribution. This also suggests there could be further payments to follow.

“Robinson’s limited net debt position of £6 million, solid interest cover of more than eight times (based on the 2019 full-year accounts) and relatively steady end-markets all underpin the firm’s ability to return to the dividend list.

“Robinson itself may not be well known but many of its multi-national customers are, as they include Gillette, Turtle Wax and Astonish, and the focus on staples like food and drink and cosmetics and toiletries mean that sales have increased by 5% in the first half of 2020.

“Cost controls mean that operating expenses have been kept flat so operating margins have gone up, even though the company has correctly continued to invest in upgrading its manufacturing operations to buffer its competitive position.

“Even if Robinson does not add to its 3.5p-a-share first interim payment, which will be paid on 30 July to those investors who are on the share register on 10 July, this sum equates to a dividend yield of 3.6% on a share price of 95p. Further distributions could top up that yield.

“Even if they are not shareholders in Robinson, income investors will draw comfort from the company’s ability to return to the dividend list so promptly, after over 380 individual dividend cut announcements so far in 2020 across the Main Market and AIM at a cost to shareholders of £32 billion.

"However, not all firms will be as soundly financed as Robinson or be as well positioned in relatively stable end markets. But at least the Chesterfield firm’s return to paying dividends offers some hope and also a template for investors of the type of company than can keep on paying dividends, or resume paying them fairly promptly, once they get a better feel for the impact of Covid-19 upon their business model and customers."

Robinson reinstates dividend after sales rise 5% in first half

Packaging group Robinson reinstated its dividend after its operating profits increased in the first half, amid a rise in sales and continued improvement in margins....

Packaging company Robinson posted a rise in annual profit but said it wouldn't pay a final dividend, in order to conserve cash during the Covid-19...

Packaging company Robinson eked out a modest first-half profit after rising sales were offset by recruitment and training costs.

Pre-tax profit for the six months...

Roberts was currently a managing director of at Klockner Pentaplast and...

END_OF_DOCUMENT_TOKEN_TO_BE_REPLACED
The value of your investments can go down as well as up and you may get back less than you originally invested. We don't offer advice, so it's important you understand the risks, if you're unsure please consult a suitably qualified financial adviser. Tax treatment depends on your individual circumstances and rules may change. Past performance is not a guide to future performance and some investments need to be held for the long term.