One of the odd features that characterised the FTSE 100 before the Covid-19 crisis was the number of chief executive (CEO) and chief financial officers (CFOs) leaving their posts. Tesco’s Alan Stewart has now added to this list as he prepares to retire as the grocer’s chief bean-counter on 30 April 2021, the first to plan his departure for next year.

Since 2000, an average of 12 FTSE 100 firms a year have seen a change in CEO and 15 in CFO. Eleven companies have already welcomed a new boss this year and five more look set to do so before the year end, with Tesco’s Ken Murphy and Imperial Brands’ Stefan Bomhard the next pair due to take the top job, ahead of Luis Gallego at International Consolidated Airlines in September and then whoever is appointed to take the helm at Pearson and Persimmon before the end of the year. 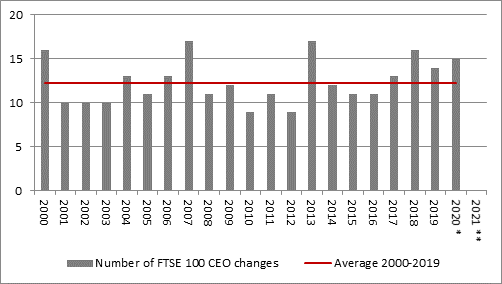 Fifteen FTSE 100 firms are set to welcome a new CFO in 2020 and Mr Stewart’s announcement is the sixteenth for the year, although his retirement becomes effective in spring 2021. 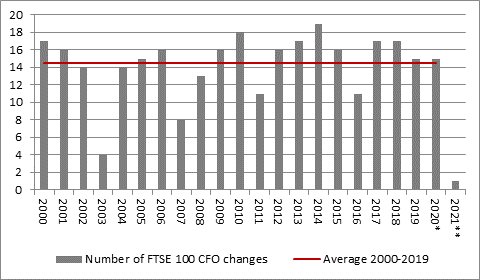 Five of those changes have already become effective, at Bunzl, Auto Trader, Reckitt Benckiser, WPP and – when it was still in the FTSE 100 – NMC Health, with new appointments at Rightmove (albeit an interim one in this case) and then BP, DCC, United Utilities, Spirax-Sarco and Smith & Nephew all due to settle in before the end of the summer.

There can be many reasons why a CFO steps down. 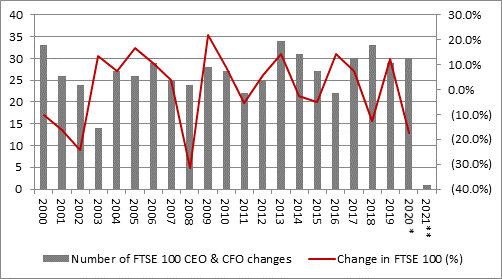 In this case it is hard to argue that Mr Stewart is hurrying out of the door. By the time he retires in April 2021, he will have been Tesco for just over six-and-half years, compared to the current FTSE 100 average of 5.5 years (and the average for CEOs of 5.1 years) and the lengthy run-in means Tesco has plenty of time to find the right candidate and arrange a smooth succession.

END_OF_DOCUMENT_TOKEN_TO_BE_REPLACED
The value of your investments can go down as well as up and you may get back less than you originally invested. We don't offer advice, so it's important you understand the risks, if you're unsure please consult a suitably qualified financial adviser. Tax treatment depends on your individual circumstances and rules may change. Past performance is not a guide to future performance and some investments need to be held for the long term.