Hammerson yet to nail a catalyst that unlocks value for shareholders

Hammerson yet to nail a catalyst that unlocks value for shareholders

“Hammerson’s shares continue to look very cheap on both a dividend yield and net asset value (NAV) basis, its prime outlet sites are proving their worth and the company continues to shift its tenant mix away from the stricken high-street fashion sector, but investors don’t seem to want to know,” says Russ Mould, AJ Bell Investment Director.

“Even a share price that stands at a 60% discount to net asset value does not appear enough to stir interest. The problem is that rents and net asset value are still dropping. Rental income fell 12% year-on-year in the first half and the NAV per share figure fell 12% to 685p, the lowest figure since the end of 2015. This negative momentum leaves the stock without a catalyst, as it just adds to investors’ concerns that the gap between the share price and NAV will close through the NAV going down rather than the share price going up. 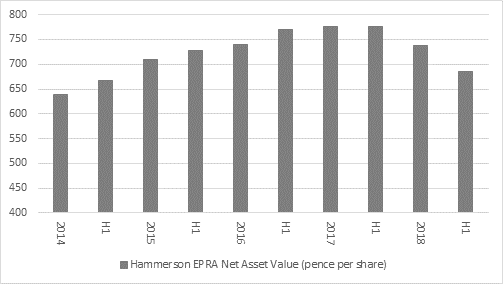 “A bid from France’s Klepierre didn’t get the shares going for long an attempt to double-down on shopping centres through the purchase of INTU last year hurt the share price rather than helping it. Any sign of stabilisation in NAV could be a trigger for share price gains, as no-one seems to be expecting that, despite the 96.7% occupancy rate, shift to mixed-use developments and plan to reduce the £3.4 billion net debt pile by selling assets. Less debt means less risk and less risk can mean a higher valuation, or at least provide additional protection should there be an unexpected downturn in trading. 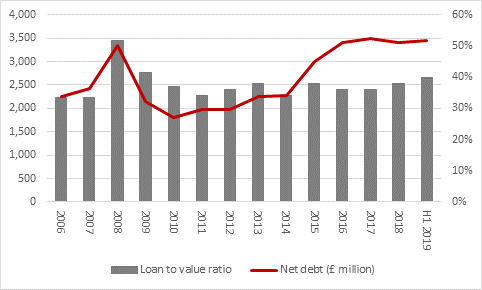 “Even merger and acquisition activity in the real estate investment trust sector has failed to stir sustained interest in it, following Londonmetric’s bid for AJ Mucklow, approaches for Helical Bar and unsuccessful attempts to snap up RDI International, as well as INTU and Hammerson itself.

“Barring a sudden upward shift in UK economic momentum, Hammerson may therefore be one of those stocks that is cheap and stays cheap for a while, as investors ponder whether it is a value trap or a big opportunity. The big discount to NAV is not a huge vote of confidence and neither is the 9%-plus dividend yield, assuming an unchanged annual distribution of 25.9p.

“The muted response to Hammerson’s numbers sits in marked contrast to the warm reception given to FTSE 100 REIT peer SEGRO’s interims last week. This reflects ongoing investor enthusiasm for pockets of the real estate market – notably warehousing and any firms that facilitate e-commerce, as well as self-storage and niche brownfield redevelopment specialists. These companies are valued at small discounts to net asset value, or even enjoy premium ratings, and investors are generally demanding lower dividend yields from them as they are seen as lower risk.

“Meanwhile, investors are fighting shy of real estate firms which have exposure to physical retailers, the City of London and newbuild developments in the nation’s capital. With the occasional exception, these stocks tend to trade at substantial discounts to net asset value and have to offer high dividend yields to compensate shareholders for the risks (perceived or real) associated with holding them.”

END_OF_DOCUMENT_TOKEN_TO_BE_REPLACED
The value of your investments can go down as well as up and you may get back less than you originally invested. We don't offer advice, so it's important you understand the risks, if you're unsure please consult a suitably qualified financial adviser. Tax treatment depends on your individual circumstances and rules may change. Past performance is not a guide to future performance and some investments need to be held for the long term.