A blossoming order book, an upturn in business in the USA and management’s forecast of a return to a net profit in 2022 are not proving enough to support shares in Hunting as financial markets continue to fret about a recession and a possible drop in demand for oil. A cash outflow in the first quarter of $38 million is also spooking investors.

Both factors may be enough to persuade some investors to take flight. Patient portfolio builders could decide to tough it out, though, given the energy crisis is already leading to increased drilling activity both in the USA and worldwide, especially as Hunting’s shares are already trading near ten-year lows and the stock trades on a low multiple of both asset values and past peak earnings

Hunting is not a pure play on oil and gas, since around a fifth of revenues come from the steel, aviation, medical, telecoms and space sectors, although that diversification can at least help Hunting weather the vagaries of the oil industry’s spending cycles.

But the company supplies its metal tools, valves, joints and components to both oil companies and oil equipment giants such as Schlumberger, Baker Hughes and Halliburton, who then use or provide kit that facilitate the extraction of oil and gas from wells.

The US rig count is up 60% year-on-year to 753 and the worldwide figure up 29% to 1,628, according to data from Baker Hughes. Growth in global rig activity has slowed in spring, despite steady acceleration in America, but neither active rig figure is anywhere near their past highs, or the levels seen when oil last traded north of $100 a barrel. 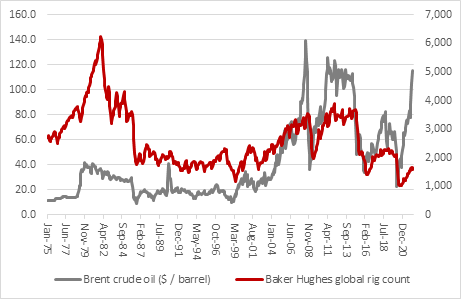 The globe’s oil majors – BP, Chevron, ConocoPhillips, ENI, ExxonMobil, Shell and TotalEnergies - are starting to nudge up their capital expenditure budgets, after a long period of austerity. Some of that could reflect increased investment in renewable projects but Hunting chief executive Jim Johnson, is flagging a clear uptick in US business levels for the company. 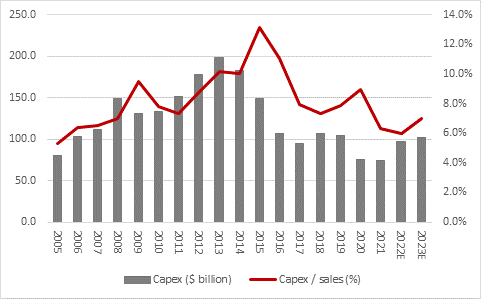 This will be very welcome after a lengthy slump in sales and profits, the latest leg of which came in 2021. Revenues fell 17% year-on-year and Hunting made another pre-tax loss on a stated basis (and it do so even if $45 million in exceptional items were excluded). 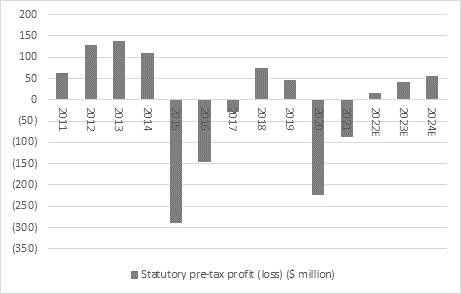 Analysts are pencilling in a return to the black in 2022 and the last three months show upgrades to their estimates, so they will be pleased to see Mr Johnson confirm that Hunting expects to make a net profit this year.

However, the earnings forecasts for 2022, 2023 and 2024 do not approach Hunting’s prior cyclical peaks, when pre-tax profit exceeded $100 million. Unlikely as such a recovery may seem right now, the burgeoning energy crisis could lead to short-term policy changes on Capitol Hill, in Westminster, Berlin and elsewhere that encourage rather than discourage the production of hydrocarbons (even if that move in favour of near-term energy security would frustrate, even enrage, environmental campaigners).

A return to anything like those peak-peak profit numbers could leave Hunting’s stock looking very cheap, given the company’s market cap is some £370 million.

Earnings per share (EPS) exceeded 40p in 2012, 2013 and 2018 and they got close in 2006. If they ever get there again then the valuation could look tempting, as that would equate to less than six times earnings, and they could catch the eye of some if EPS even gets back to that level.

The shares may also come with a little downside protection, should oil and gas prices start to soften, the investment boom fail to materialise or wider sentiment toward equity markets continue to sour.

Hunting has a net cash pile and carries net assets on its balance sheet of $855 million, or around £700 million at current exchange rates.

Even stripping out goodwill and other intangible assets ($200 million, or £165 million) still means that Hunting’s £370 million market capitalisation represents a fraction of book, or net asset value.