Well, that didn’t take long. The Fed began to pump less Quantitative Easing (QE) into the financial system in November and the stock market’s wheels have started to wobble after barely two months of less cheap money, let alone move to withdraw it.

Investors are already starting to ask themselves how much the US Federal Reserve can do to tighten monetary policy before it either puts the brakes on the economy, breaks the stock market or both – and the answer might be not very far at all.

Some of the asset classes, funds and individual stocks which have performed best, attracted the hottest money flows and drawn the biggest headlines have started to flag, or even fall sharply. All are generally toward the riskiest end of the asset class spectrum, where the rewards can be highest, but the risks are too, should something go wrong.

Small caps are wobbling. America’s Russell 2000 index is now trading below where it was twelve months ago, and the UK’s FTSE Small Cap benchmark is losing a little momentum. 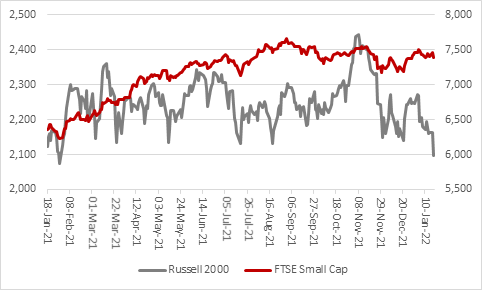 Meme stocks are taking a pasting. You have to hope that anyone who has held on to GameStop, AMC Entertainment and others to thwart the hedge funds who were short-selling these names have not ended up cutting off their own noses to spite their face. Buyers in the very early days may still be in the black, but anyone who piled in late to join the fun or try to make a fast buck could now be deeply in the red. 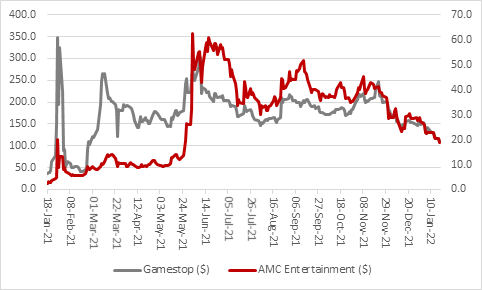 Cryptocurrencies have swooned once more. 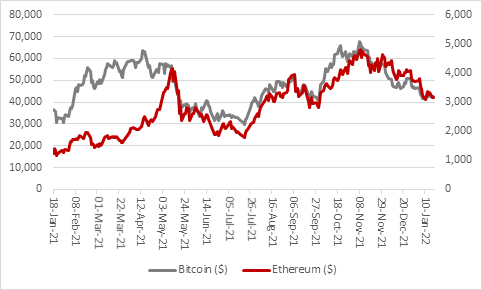 And the poster child for fans of momentum, tech and potential disruptive winners, the ARK Innovations Exchange-Traded Fund (ETF), continues to sink. 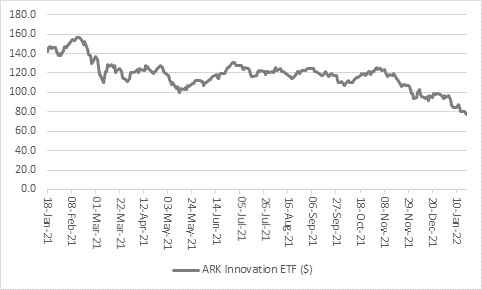 That should mean the Fed’s $8.8 trillion balance sheet stops growing in March. After that, the central bank may turn to Quantitative Tightening (QT) and start to withdraw stimulus and shrink its balance sheet.

Meanwhile, the markets have started to price in at least four one-quarter percentage point interest rate increases from the US central bank by the end of this year. 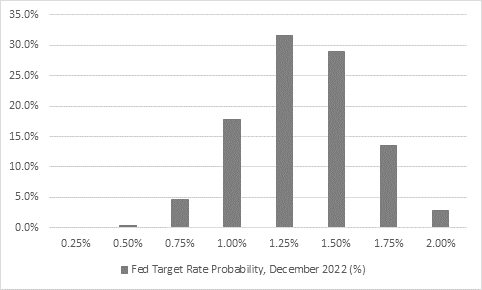 Recent precedents for tighter monetary policy (or even simply, less loose, less accommodative policy) are enough to give investors pause for thought: 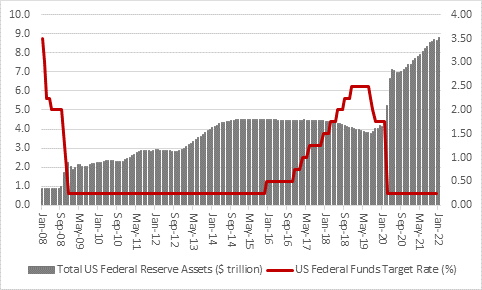 There are good reasons for such caution. Global debt is so much higher now than it was in 2013 or even 2018, so the economy will be much more sensitive to even minor changes in interest rates.

More specifically for share prices and company valuations, tighter monetary policy – at a time when indebted Governments are throttling back on their fiscal stimulus programmes and looking for fresh sources of income from tax or social levies – has four possible implications:

All four are clearly worrying previously rampant financial markets but that in theory should not be the concern of the US Federal Reserve, or indeed any central bank. Their job is to keep inflation on the straight and narrow, to ensure it does not destroy wealth and prosperity and imbalance the economy.

But a decade and more of zero interest rates and QE – unintentionally or intentionally (judging by a string of speeches from former Fed chair Ben S. Bernanke dating back to at least 2003) – have persuaded or forced investors to take ever-increasing amounts of risk to get a return on their money.

Central banks are presumably concerned that having tried to create a wealth effect by stoking asset prices, the opposite effect could kick now in, hitting confidence and consumers’ ability and willingness to spend.

If inflation really does prove to be sticky, or even keep going higher, central banks may therefore be stuck between a rock and a hard place. They will want to control inflation on one side but their ability to jack up interest rates and withdraw QE may be constrained by record debts and concerns about the economy, employment (and financial markets’ stability) on the other.