“On stated basis, sales and profits now look set to drop by 15% and 40% respectively this year. Currency movements have something to do with the weak numbers. But the real blows are lower-than-expected global sales of fifth-generation (5G) mobile telecoms network infrastructure and emerging signs of slackening demand in the smartphone market, which may be related to supply-chain disruption and chip supply shortages elsewhere.

“This goes to show that IQE is far from immune to global trends, even if the Cardiff-headquartered company tends to march to its own beat.

“It does not make chips, but the wafers from which they are made.

“These so-called epitaxial wafers are then used as the basis for chips that are used in specialist functions and products, such as mobile handsets, mobile telecom network infrastructure, 3D imaging and sensing and photonics systems for fibre-optic telecoms networks.

“These target markets enjoy demand cycles all of their own, which are as much led by technology and the shift to next-generation products as the wider economic cycle. This is a little different from the broader silicon chip industry, which follows a more typical boom-and-bust pattern, related to swings in demand caused by the economic cycle and swings in supply as manufacturers cut or increase investment according to where they think demand is going next.

“However, global chip sales are booming right now, and industry trade association forecasts are currently pointing to 20% worldwide revenue growth to a record $527 billion in 2021, with further gains expected in 2022. 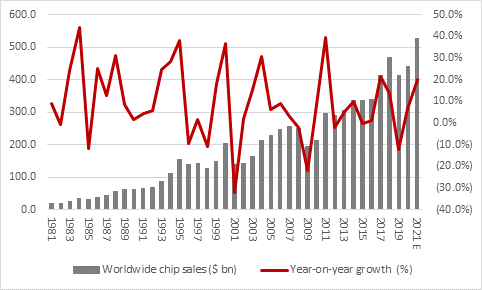 “Even IQE’s previous forecast for 2021, of flat sales and unchanged (adjusted) earnings before interest, taxes, depreciation and amortisation (EBITDA), assuming no major currency movements, was a bit pedestrian in this context.

“The profit warning today is therefore even more of a let-down.

“That implies adjusted EBITDA will barely exceed 2012’s levels and may help to explain why the shares are trading no higher now that they did in spring 2011, even if they have still almost doubled from their pandemic-panic lows of March 2020. 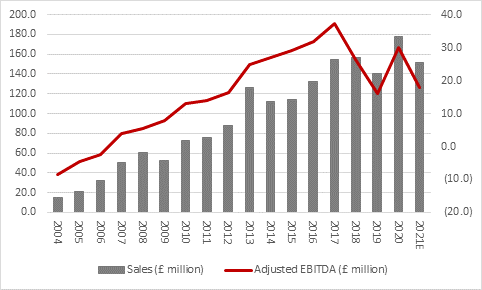 “Former chief executive Dr Drew Nelson could be said to have timed his exit rather well and incoming boss Americo Lemos will be busy when he takes the helm in January.

“Dr Nelson, and interim Executive Chairman Phil Smith, have already tried to make IQE leaner and meaner through the consolidation of the manufacturing facilities in Singapore and Pennsylvania USA. Their output will be transferred to Taiwan and North Carolina respectively.

“Mr. Smith has also overseen a reduction in this year’s capital expenditure budget in response to the weaker-than-expected trading.

“IQE had initially budgeted to spend £25 million, or 14% of forecast sales, on new production equipment in 2021, so it could expand its capacity to manufacture wafers in its specialist reactors, for which Germany’s Aixtron is a key supplier.

“The Welsh firm has now cut that back to £14 million to £17 million and at the mid-point that suggests capex will come in at 10% of the new forecast sales figure.

“Aixtron’s shares are down 7% on the Frankfurt stock exchange today and are now trading 30% below their August peak, in recognition of the cutbacks at this particular customer. 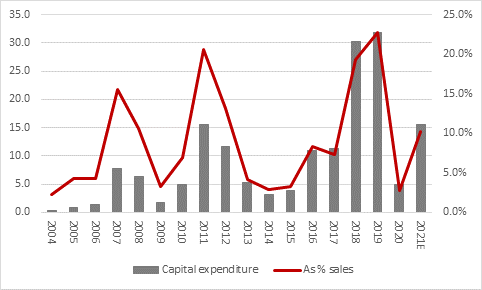 “Management, analysts and shareholders alike will now be hoping for a bounce back in demand 2022, 2023 and beyond, helped by growing uptake of 5G mobile services and how the internet-of-things continues to drive demand for wirelessly connected devices.

“At least IQE’s balance sheet shows a small net cash position, at least before £53 million of lease liabilities, so it can ride out the current choppy trading conditions, but investors still have to tackle the vexed issue of the stock’s valuation.

“A forward price/earnings (PE) ratio of around 30 times for 2022, assuming analysts do not take the knife too deeply to next year’s forecasts, is the sort of territory that will put off deep value-seekers and appeal only to growth and momentum investors.

“Such a rating leaves little margin for error, although IQE’s £125 million in fixed assets and production equipment (compared to forecast annual sales for 2021 of £152 million) do mean that the business is highly operationally geared.

“Even a small change in sales could lead to a big increase in profits (although the opposite also holds true), so IQE’s lofty valuation could prove deceptive and rapid upturn in sales could mean the shares are a lot cheaper than they first appear. Equally, if sales continue to disappoint then profit forecasts would probably continue to decline at a faster rate.”