Shell’s fourth-quarter and full-year results were undeniably ugly, as both offered huge losses, but the oil major’s promise of a dividend of $0.1735 a share in the first quarter of 2021 would represent an increase in the pay-out on both a quarter-on-quarter and a year-on-year basis.

Shareholders must now decide whether that promised payment, which would represent a 4% increase on the fourth quarter and an 8% hike on the first quarter of a year ago, will bring welcome succour or leave them exposed to a value trap that could make them feel like suckers. 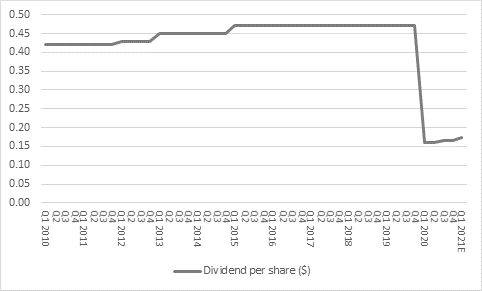 Shell’s net loss for the year of $21.7 billion reflects the storm which faced the company as the global pandemic, lockdowns and recession all weighed on demand for oil and gas. The average price that Shell received for its oil dropped by more than a third in 2020 while gas prices fell by a quarter as the company also cut its output.

Yet the company also swallowed more than $21 billion in asset impairments and charges against onerous contracts, partly as a result of difficult near-term trading conditions but primarily owing to downward revisions to Shell’s long-term price and oil refining margin assumptions, in light of the planned global move toward ‘net zero’ by 2050.

As a result, the underlying results were not quite as bad, even if full-year income of $4.8 billion using Shell’s preferred metric of replacement cost, or current cost of supply (CCS) profit, still slightly undershot analysts’ forecasts. (CCS profit excludes the effect of changes in the oil price upon the value of inventory held by oil and gas producers). 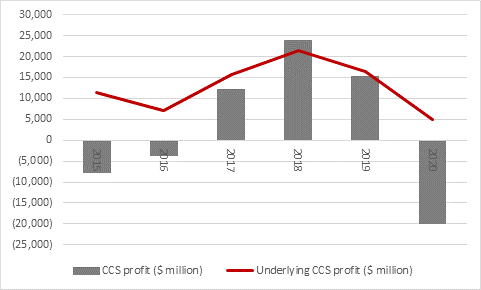 Since those $21 billion-plus in write-downs will have been non-cash items, Shell also continued to generate cash. Even allowing for the headline loss and the plunge in underlying CCS earnings, Shell generated enough cash flow, after tax and capital expenditure, to cover its proposed dividend payment twice over. Throw in the fact that oil and gas prices moved higher through 2020 and have advanced again in early 2021 and this may have underpinned the decision by chief executive officer Ben van Beurden and the board to sanction the $0.1665 dividend for Q4 and target that increase to $0.1735 in Q1 2021.

For all of its current woes, Shell’s free cash flow has covered that sum seven times in the past ten years by at least a factor or two. This may offer some comfort to income seekers that Shell’s prospective dividend yield of around 4% can be relied upon after 2020’s juddering cut. It also helps to provide support to the forecast 3.6% from the FTSE 100 overall for 2021, since the oil major is expected to be the sixth-biggest dividend in cash terms this year (after BAT, HSBC, Unilever, Rio Tinto and GlaxoSmithKline), according to consensus analysts’ forecasts. 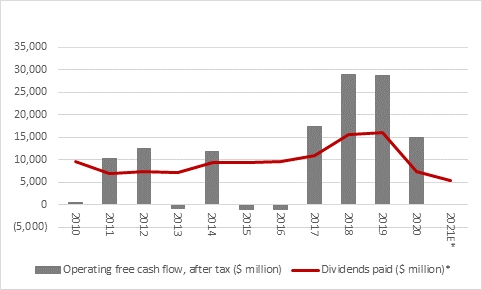 The years when free cash flow did not cover the new forecast dividend run rate by two times or more were 2013, 2015 and 2016. In 2013 oil prices dipped marginally but capital investment reached nearly $40 billion, more than twice its 2020 level, and Shell is clearly showing more capital discipline now than it did back then. In 2015 and 2016 oil prices slumped to drag profits and cash flow lower and that flags the risk with Shell which means some investors will be inclined to argue it is a value trap.

Long-term bears will argue that the global move to ‘net zero’ by 2050 means Shell faces the danger that it is sitting on stranded assets, whose value may never be fully realised (a view only reinforced no doubt by 2020’s asset write-down and impairment charges). They will also suggest that a long-term shift away from hydrocarbons exposes the major to pricing pressure in oil and gas. Any deep and sustained price falls could also deprive Shell of the cash flow that it needs to invest or acquire businesses in new areas and reinvent itself in a low- or zero-carbon world.

Bulls of the stock will counter by flagging how the dividend is now well covered by cash flow, how the company is tightly managing costs and capital investment and how the rebound in oil and gas prices could become more pronounced if the vaccination programmes succeed in beating off the pandemic and pave the way for a big recovery in global economic activity (and therefore demand for fuel and energy).

Demand could rise just as the oil majors cut investment, US shale output falls thanks to a clampdown on fracking by President Biden to a clampdown and global oil rig activity languishes after 2020’s oil price collapse.

That could make for a surprise cyclical comeback from an industry that financial markets seem to be writing off – the FTSE All-Share Oil & Gas Producers index rose 50% in 2016, the year after BP and Shell last made a combined loss, just as they did in 2020 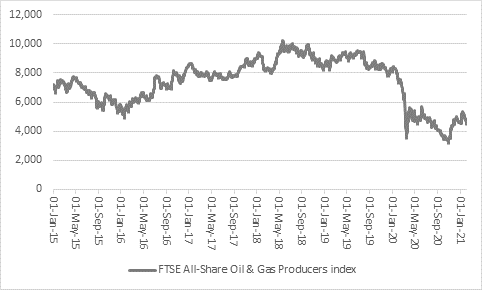