The Restoration of the monarchy under King Charles II is seen by many historians as the end of the joyless times of the Commonwealth and a return to jollier ones under Old Rowley and his merry gang of courtiers, so equity investors will be hoping that Land Securities’ decision to restore its dividend in 2020 is a sign of better times to come for stock markets.Income-seekers will be particularly pleased after £25.6 billion of dividend cuts announced by FTSE 100 firms so far in 2020.

The real estate investment trust (REIT) cancelled its expected third- and fourth-quarter dividends of 11.6p a share and has not laid out plans for a first-quarter payment for 2020, either.

However, the commercial property landlord has declared its intention to pay a dividend for the first half of 2020 alongside its interim results in November. This gives some credence to the consensus analysts’ forecast that the REIT will pay out a dividend of 24.5p a share for the year to March 2021. 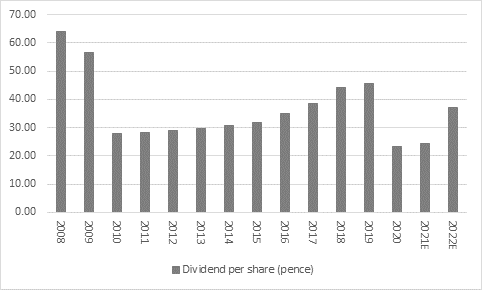 That would put British Land on a forward dividend yield of nearly 3%. That’s a far cry from what shareholders were hoping for a year ago – and off a higher share price for good measure – but it still beats cash and UK Government bonds hands down, albeit in exchange for greater capital risk. Equally, bulls of the sector would argue that there could be capital upside, too, if the UK economy bounces back from the pandemic faster than expected and prognostications of permanently empty offices and consistently reduced footfall in shopping centres and on High Streets prove too gloomy.

The substantial discounts to historic net asset values at which many REITs trade shows that investors still view a lot of commercial property – or at least office space in big cities and retail sites – with a very jaundiced eye, because of fears over the rise of online shopping and the long-term impact upon cities, commuting and workspaces of the pandemic.

These are legitimate concerns and the trajectory in Land Securities’ NAV per share figure would suggest some degree of scepticism is merited. Rental income began to slide last year too, even before Covid-19 really hit home, and for investors to believe in a sustained recovery in the dividend they will want reassurance on rents, too. 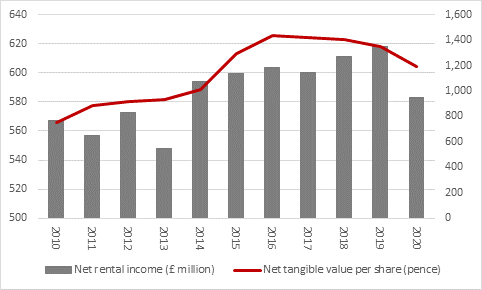 Shareholders will also be casting a careful eye at Land Securities’ balance sheet. The REIT’s loan-to-value ratio of 30.7% is way below the near-50% level seen during the Great Financial Crisis but this is mainly because of rising asset valuations, rather than falling debt. Sustained pressure on the 46% of the portfolio that is retail and leisure related could force that ratio higher, even if the £6.9 billion office portfolio holds relatively firm. 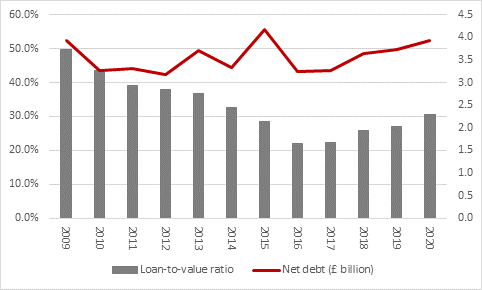 However, many of these concerns may already be reflected in the valuation. Land Securities’ shares trade at a 54% discount to their historic net asset value, a level which factors in at least some further decreases in rental income and property values. It may therefore not take too much for the company’s operational and financial performance to surprise on the upside.

Land Securities’ assets are heavily skewed toward London, a global city whose appeal to investors, especially overseas ones, is likely to dim for too long, at least assuming some degree of a return to normality. The UK offers rule of law, so assets cannot be appropriated, an independent central bank and a cheap currency for starters.

In addition, the company is already looking to repurpose four sites in London that are currently purely retail so they become mixed use, with a residential property element. To say those sites have little or no value is surely wide of the mark, especially as the Government is reported to be thinking about making it easier to repurpose commercial property sites. This could be a new leg to the REIT story over time, even if it is one that may only develop slowly.

View our Q2 forecast of dividend payouts for FTSE 100 companies, and a list of all UK-listed companies which have cut, suspended, or deferred dividend payments, here.

Markets dip on Fed disappointment and challenging corporate results, and Lloyds still has a pounding headache

END_OF_DOCUMENT_TOKEN_TO_BE_REPLACED
The value of your investments can go down as well as up and you may get back less than you originally invested. We don't offer advice, so it's important you understand the risks, if you're unsure please consult a suitably qualified financial adviser. Tax treatment depends on your individual circumstances and rules may change. Past performance is not a guide to future performance and some investments need to be held for the long term.