“Redrow’s decision to cancel its interim dividend means the FTSE 250 firm is the third housebuilder to scale back its plans to return cash to shareholders, following Berkeley’s scaling back of its special dividends and buybacks and Crest Nicholson’s cancellation of its final dividend for 2019,” says Russ Mould, AJ Bell Investment Director.

“The move saves Redrow £37 million and investors do not seem surprised, given that the shares are up today. Before the announcement the stock was, on paper at least, offering a forward yield of 9%, a figure which has now proved too good to be true.

“Redrow’s cut takes the total of dividend income lost to investors to £1.6 billion so far, with more cuts likely to come, especially as the nine major quoted house builders have a stated cash pile of £3.5 billion between them and operate in an industry where – over the long term at least – demand still seems set to outstrip supply. 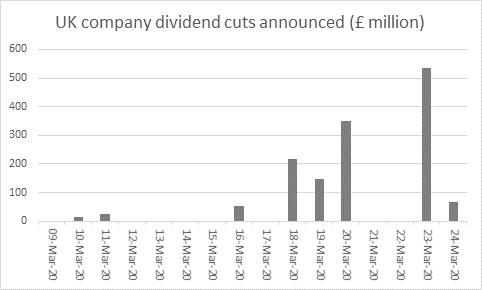 “If the builders feel the need to scale back shareholder distributions, then many more sectors and firms are likely to feel the need to do the same, the longer the lockdown lasts and the greater the potential hit to economic output becomes.

In the case of the builders, would-be house buyers may well be reluctant to make the biggest financial commitment they will ever make – taking on a mortgage – while the economic outlook is so uncertain, even if the Government is doing its best to try and support them when it comes to their income and meeting expenses. Moreover, it will be very difficult for consumers to check out their potential new home if they (and the sales staff they would have met) are confined to their current one.

“Reservation and cancellation rates will therefore be of great interest to investors as the builders provide a fuller picture of trading over the coming weeks. Normally a combined forward order book of some £13 billion, more than half of aggregate sales across the nine firms in their last financial years, would provide a good degree of comfort, but these are unfortunately not normal times.

“This all leaves investors wondering what to do the sector. All nine share prices have fallen sharply with the result that between them they now trade at only just above historic book, or net asset, value. That would usually be a signal that the worst is in the price, especially as around a sixth that total asset value across the sector is net cash.

“But if sales and building activity grinds to a halt then losses could accrue and asset values start to shrink. That is the bleak scenario that investors appear to be pricing in right now but such a historically lowly valuation could start to look like an opportunity at some stage, as and when we get clarity on the severity and duration of the viral outbreak and some feel for the hit to consumer’s finances and confidence levels.”

END_OF_DOCUMENT_TOKEN_TO_BE_REPLACED
The value of your investments can go down as well as up and you may get back less than you originally invested. We don't offer advice, so it's important you understand the risks, if you're unsure please consult a suitably qualified financial adviser. Tax treatment depends on your individual circumstances and rules may change. Past performance is not a guide to future performance and some investments need to be held for the long term.