As yet another fat dividend yield that looked too good to be true proves to be just that, with Centrica’s decision to slash its interim payment by more than half, income investors will be starting to wonder which FTSE 100 firm will be next to make the unkindest cut of all.

Vodafone, Marks & Spencer and now Centrica have all cut their dividends and there may be more to come, as firms decide to invest in areas of strategic importance, have to top up their pension funds, combat debt piles, encounter tough trading conditions or a combination of all four.

Had Centrica stuck to a full-year dividend payment of 12p a share, that would have implied a dividend yield of more than 13% on yesterday’s closing price – an absurd level when the headline Bank of England interest rate is 0.75% and the 10-year Government bond yield (the so-called ‘risk free rate’) is just 0.66%.

The market was giving Centrica no credit for paying such a yield so it is amazing that chief executive Iain Conn chose to defend it in 2016, 2017 and 2018 as earnings cover got progressively thinner and profits and cash flow came under pressure. 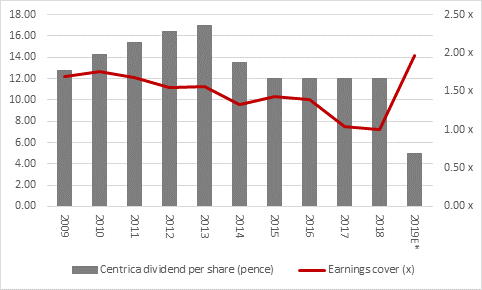 Source: Company accounts, 2019E assumes payment of 5p a share, as per today’s forecast from management

Cutting the dividend, which was costing Centrica more than £650 million a year, is therefore the right thing to do – the only wonder is why it took so long, although after the cuts of 2014 and 2015 you can perhaps see why Mr Conn would resist a third reduction in less than a decade, especially as such a move would leave his neck on the block.

Mr Conn cited the impact of regulation on profits and increased demands on cash flow, which in effect means investing in the core business to keep it competitive and also topping up the pension fund, which cost £153 million in the first half alone.

This has echoes of Vodafone saying it needed to focus on investment in 5G and debt reduction and Marks & Spencer justifying its dividend cut on the basis of the deal to purchase 50% of a food delivery joint-venture with Ocado. There remains the danger that other firms will follow this lead, citing the strategic imperative of investment, which is really code for how they have over-distributed cash to investors and under-invested in their business, which is a dangerous path to follow.

The question that income investors therefore need to ask themselves now is who will be the next to cut. The precedent has been set, Vodafone’s share price is now rising, Marks & Spencer is holding on grimly to levels just above 200p and it will be interesting to see if Centrica’s acceptance of the inevitable puts a bottom under its ailing share price. If it does, it may embolden more executives to take the leap and make the cut.

In a perfect world, earnings should cover the forecast dividend payment by 2.0 times, to leave some wiggle room should anything unexpected go wrong – although exceptions can be made for industries where demand is in theory pretty steady, such as utilities and consumer staples, making an exception for Centrica will have left many investors with a dividend cut and falling share price on their books. In a world of ever-greater regulatory intervention, investors must even approach previous Steady Eddies with more caution than before.

Their checklist is therefore

Before today’s announcement, an unchanged dividend would have made Centrica the highest-yielding stock in the FTSE 100 (and was still sixth even based on the consensus estimate of a cut to 7.3p, which the firm has undershot today).

Persimmon and Taylor Wimpey are now top of the pile, to reflect investors’ concerns over the house building cycle and broader UK economy, and especially what happens is Help to Buy is ever withdrawn – but at least they have net cash balance sheets to pay their regular and special dividends.

But only two of the 20 highest yielders in the FTSE 100 offer dividend cover of more than 2.0 times, Lloyds and International Consolidated Airlines and both come from cyclical industries where competition is stiff and revenues sensitive to the economy.

Of those in the top 10, BT would look to be at risk, given new boss’ Philip Jansen’s focus on broadband delivery as means of winning and keeping customers, the firm’s pension deficit, and the squeeze it is feeling from regulators on one side and a host of competitors on the other.

A major global economic downturn does not look likely for now but such an event would pressure Evraz and IAG and TUI, while another name to watch is GlaxoSmithKline. It may only rank 43rd in the FTSE 100 by dividend yield at 4.6% but boss Emma Walmsley is emphasising investment in research and development and while cash returns to investors remain a high priority it looks as if R&D is top of the capital allocation pile (as it should be, in this company’s case). GlaxoSmithKline has not increased its dividend since 2014’s increment to 80p a share.

In terms of those firms that do offer the relatively safety of earnings cover of 2.0x or more, Centrica now ranks third with a forecast yield of 5.5% (which may tempt contrarians to take a look).

In the end, investors probably need to be most careful of those firms with fat yields where dividends are not growing and maintaining the payment is a real burden. While the past is no guarantee for the future, history shows that it is firms which grow their dividend over time that do best, as a rising payment will almost inevitably drag the share price higher over time.”

At the time of the publication of AJ Bell’s last dividend dashboard, only 27 current FTSE 100 members had managed to increase their payment every year for the last decade. Of those, 22 had beaten the index in capital return terms over the 10-year span and 24 had outpaced it in total return terms, while the aggregate gains from all 27 beat the FTSE 100 hands down.

The tricky bit is that only 13 of the 27 were actually in the FTSE 100 a decade ago, so investors may need to burrow through the FTSE 250 if they are looking for the next generation of dividend growth champions.

END_OF_DOCUMENT_TOKEN_TO_BE_REPLACED
The value of your investments can go down as well as up and you may get back less than you originally invested. We don't offer advice, so it's important you understand the risks, if you're unsure please consult a suitably qualified financial adviser. Tax treatment depends on your individual circumstances and rules may change. Past performance is not a guide to future performance and some investments need to be held for the long term.