The combination of rising interest rates - and therefore improving net interest margins – alongside cost control and low expectations means that HSBC’s second-quarter results are pleasing investors and adding a final polish on reporting season from the Big Five FTSE 100 banks.

Profits and cash returns have either met or beaten forecasts, and only Barclays really came up with any nasty surprises. That was thanks to yet another regulatory fine for its investment banking operation, something which should, at the very least, give pause for thought to those who did a victory lap when the bank fended off Edward Bramson and his proposal to spin off that business.

There may well be further challenges ahead for the Big Five, however, especially if stock markets turn down again and make life harder for investment banking operations, or a recession sweeps the globe. But at least their share prices are already discounting tougher times ahead to some degree, as all five stocks trade at a discount to their latest tangible net asset value (NAV) per share figures – although in NatWest’s case the gap is now quite small.

A discount to NAV can be investors’ way of politely questioning whether the asset valuations are reliable, but if they prove to be so then the shares could look cheap, especially if the worst-case scenario does not pan out.

Despite the risk of a global slowdown, or even downturn, this may not be as outlandish a prospect as it seems. Granted, a recession would surely lead to an increase in loan and asset impairment charges (something those discounts to NAV are already anticipating). But the banks’ finances are much more robust compared to the 2007 when the Great Financial Crisis was about to hit, at least if regulatory Common Equity Tier 1 and leverage ratios are anything like a reliable guide.

Moreover, all of the Big Five sport a loan-to-deposit ratio below 100%. This means they have a much more reliable base source of funding – customer deposits, which tend to be fairly sticky – compared to 2007 when they were much more exposed to wholesale and interbank funding markets.

This may also explain why net interest margins are rising. The banks are able to hold down returns for depositors and raise rates for borrowers, allowing them to pocket the interest rate differential as margin. This would be harder to do if they were still so reliant on wholesale markets, where interest rates would also likely be rising. This may be an unexpected result of Basel III regulations and mean that central bank rate rises could spark fatter profits – and perhaps more lending – after more than a decade when the monetary authorities have used zero interest rate policies (ZIRP) and Quantitative Easing (QE) to no great avail. Perhaps the banking world is about to be turned on its head.

HSBC’s results offer some hint of this. Net interest margins are finally going back up. An improvement of sixteen basis points (0.16%) might not sound a lot, but it all adds up on a $1 trillion loan book 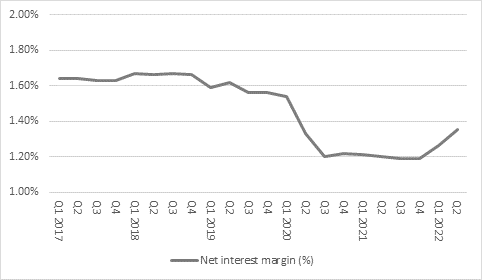 Loan growth is also accelerating. It may not look much in dollar terms thanks to the ongoing strength in the greenback but in sterling terms the picture is much more interesting. 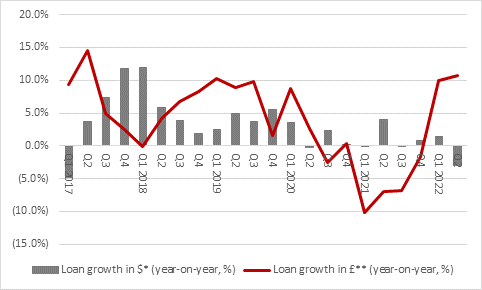 As a result, profits are beating expectations and cash returns are going up, thanks also to good cost control and no major deterioration in loan and asset impairment charges, although analysts and investors will have to remain watchful for any signs of a downward turn in the credit cycle and upward movement in sour loan losses. 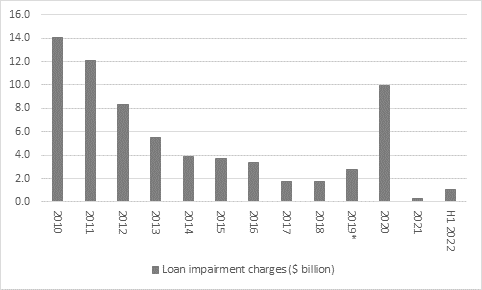 The interim dividend of $0.09 beats analysts forecasts of $0.08 and last year’s $0.07 distribution at the same stage. Even though some investors may be disappointed that HSBC is not adding to its buyback programme, they might well welcome the return of quarterly dividends in 2023, and boss Noel Quinn’s upbeat assessment of where return on tangible equity could get to in 2023 and 2024.