The outgoing Chancellor, Rishi Sunak, may wish he’d been dealt a better hand. Brexit, covid-19 and the Russian invasion of Ukraine all meant that global events had a huge influence on the UK economy and the nation’s finances.

Given the events of recent days, it is hard to know precisely how long the latest appointment to 11 Downing Street, Nadhim Zahawi, will have in the role. Whoever tackles the Treasury’s long-term challenges – whether that is Zahawi, or someone else when a new Prime Minister is announced – they will be hoping for a bit more luck.

Investors will be looking to their portfolios to gauge the effect of the Chancellor’s policies. Although talk of tax cuts and spending are helping to support share prices today, the lessons of the 1970s and the legacy of both the Barber crack-up boom and similar patch fixes was not one that portfolio builders found to be rewarding.

Nadhim Zahawi is the eighteenth Chancellor of the Exchequer since the inception of the FTSE All-Share index in 1962. Twelve of his predecessors have been Conservative and five Labour. The longest term in office was that of Labour’s Gordon Brown, the shortest of the Conservatives’ was Iain Macleod, who held the post for barely a month before his sudden, unexpected death.

At first glance, from an investors’ point of view, there is nothing in it between the two parties. Under Conservative Chancellors, the FTSE All-Share has chalked up a total capital gain of 357%, in nominal terms.

That equates to an average advance per Chancellor of 32.2% (including Mr Macleod’s brief term with that of his successor, Anthony Barber), while under Labour the benchmark has risen by 161% for an average gain of the same, 32.2%.

Across 36 years of Tory Chancellorships that is a compound annual growth rate (CAGR) of 4.3% against 4.1% under 24 years of Labour in 11 Downing Street and two of the top-five best spells under a single Chancellor come under Labour, again in nominal terms.

However, the picture changes profoundly when inflation is taken into account and capital returns from the FTSE All-Share are assessed in real (post-inflation) terms rather than nominal ones.

Here, Conservative chancellors come out well on top, as the withering effect of inflation upon investors’ returns from the stock market under Labour’s Healey Chancellorship of the mid-to-late 1970s comes into play, even if Labour supporters will argue his record is tarnished by the need to tackle the mess left behind by the Barber boom and oil price spike of the early seventies.

In that context, it must be noted that inflation also chewed up the nominal gains made by the FTSE All-Share under the Tory Chancellors Sir Geoffrey Howe (1979-83) and Tony Barber (1970-74).

Source: Refinitiv data, www.gov.uk. *Adjusts nominal return by change in the retail price index (RPI) as CPI data only goes back to January 1989 in current format

As financial markets today ponder whether inflation or recession is the bigger danger, or at least whether one may lead to the other, it may be worth looking back to the 1970s, especially as Mr Zahawi may face similar challenges which made life difficult for Mr Barber and Mr Healey, although some may be tempted to argue that some of the wounds, political and economic, were self-inflicted.

Not all of the inflation that tore through the British economy in 1973-74 could be laid at the door of Mr Barber’s policies, as the 1973 oil price shock had a huge amount to do with it, and this highlights the importance of factors which are beyond the control of any Chancellor, no matter how diligent or skilled.

Alastair Darling could hardly have expected to inherit the Great Financial Crisis which prompted a deep recession and a wicked bear stock market. Norman Lamont inherited British membership of the Exchange Rate Mechanism, fought to defend the pound and a policy in which he did not believe and oversaw a devaluation of sterling which actually helped the FTSE All-Share to rally. Mr Sunak has had to contend with covid-19 and the worst recession for three centuries, so perhaps he has been given the worst hand of all.

Even so, investors, looking at the world through the narrow perspective of their portfolios, will be wanting Mr Zahawi to think back to Barber and Healey. While it is understandable that a Government should look to help out the electorate during a cost-of-living crisis, for both political and social reasons, a plan of tax cuts and spending could prove combustible, again, if the 1970s are any guide.

After all, some of the problems faced by the UK economy now can be blamed on the massive fiscal and monetary stimulus applied before or during the pandemic, especially in combination with fractured supply chains, rising energy bills and staff shortages. Boosting demand without any resolution to such supply-side issues could perhaps make inflation worse and do as much damage as it is intended to do good.

James Callaghan, at Labour’s 1976 Conference in Blackpool warned of these dangers when he counselled:

"We used to think that you could spend your way out of a recession and increase employ¬ment by cutting taxes and boosting Government spending. I tell you in all candour that that option no longer exists, and that in so far as it ever did exist, it only worked on each occasion since the war by injecting a bigger dose of infla¬tion into the economy, followed by a higher level of unemployment as the next step. Higher inflation followed by higher unemployment. We have just escaped from the highest rate of inflation this country has known; we have not yet escaped from the consequences: high unemployment."

That might not be a message that is welcome in Downing Street, but it is the combined dangers of unemployment and inflation upon which the Government and Bank of England must focus.

The Misery index, based on the last published unemployment rate of 3.8% and the last retail price index inflation reading of 11.7%, is 15.5%. That is the highest since 1990 and we have been through sterling’s ejection from the ERM, the recession and stock market collapse of 2001-02, the Great Financial Crisis and recession of 2007-09, the Eurozone’s debt crisis and much more besides since then. 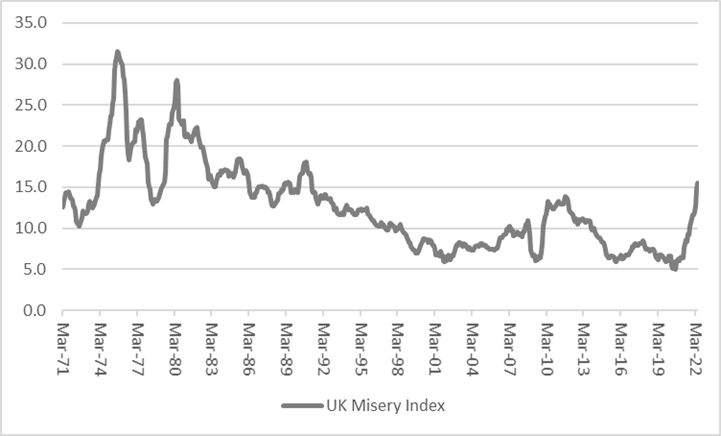 Source: ONS Data. Used RPI inflation for longer dataset, as CPI was only introduced in 1997