How Brexit vote has shaped markets six years on It is almost six years since the UK’s Brexit vote on 23 June 2016. As the Government prepares to scrap its own Northern Ireland protocol, GDP growth figures totter and energy and food security become hot topics, investors and savers are still trying to pick through the noise to work out whether they are better off or not.

The pandemic, Russia’s invasion of Ukraine and central banks’ ongoing monetary policy experiments mean it is hard to identify cause and effect but what you can say is this: since Brexit, commodities have been a better place to be than equities; the UK stock market has underperformed its global peers, despite nine takeover approaches for FTSE 100 members; and the pound continues to trade well below pre-poll levels.

Six years on, it is becoming ever clearer that Brexit will be a long process, rather than a single event, something made clear in the latest tangle involving Northern Ireland’s trade flows.

Customs checks and delays remain an unresolved area, as do fishing rights, the lack of a clear deal with the EU for financial services and the complexities regarding issues such as tariffs and point of origin for manufacture.

On the other hand, the UK was way ahead of the EU when it came to sourcing and approving vaccinations for COVID, cities such as Sunderland and Coventry are attracting foreign investment in industries such as autos and electric vehicles and the City’s pre-eminence in clearing is yet to be challenged, after a proposed extension of equivalence until 2025.

This lack of clarity could be one explanation as to why, compared to the major asset classes, UK equities have been a clear laggard since the Brexit poll, even if the referendum result has not been the only factor. This may be down as much to the FTSE 100’s make-up, and its reliance on miners, oils and banks, rather than the tech stocks which proved ideal for a low-growth, low-inflation, low-rates environment, which the Bank of England’s post-vote interest cut and additions to QE served to foster.

Ultra-cheap money and a tidal wave of liquidity, to which the Bank of England has contributed (albeit much more modestly than the Federal Reserve, Bank of Japan or European Central Bank) have gone a long way to fostering rampant speculation, as can be seen in the post-referendum performance of Bitcoin, and also inflation, as suggested by how real assets (commodities) have outperformed paper ones (bonds and equities). All that was needed for a damaging inflation spike was an exogenous shock to meet the endogenous danger. Granted, Russia’s invasion of Ukraine lit the inflationary touch paper, but central banks had already piled up the dynamite in the form of years of cheap money.

A weak pound may be a further complicating factor for the UK as it wrestles with inflation that stands at a 40-year high. The last time retail price inflation (which offers a longer dataset than the CPI or CPIH benchmarks) stood at 11.1%, the UK base rate was 14%, to further emphasise the difficult position on which the Bank of England has placed itself, courtesy of 13 years of unorthodox policy.

Sterling has never really come close to recapturing the ground it lost in the immediate aftermath of the Brexit vote. Sterling went into the result trading at $1.48 and €1.30, compared to today’s $1.23 and €1.17. This may be the financial markets’ ultimate verdict on the outcome of Brexit to date, especially as the third Prime Minister to hold office since the ballot faces opposition from his already-fractious party over plans to rip up his own Northern Ireland protocol. 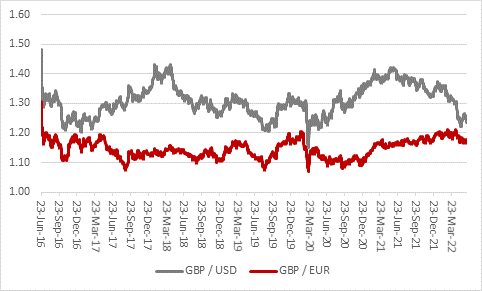 However, the weak pound has had two potentially positive effects, at least from the narrow perspective of investment. The pound’s plunge has increased the value of the FTSE 100’s overseas earnings, which represent about two-thirds of the total, and it has lured predators to British shores. Nine FTSE 100 firms have been taken over since the Brexit vote, thanks to the cheap pound and UK equities’ underperformance, which has left the UK market looking cheap compared to many of its overseas counterparts on a yield and earnings basis. Those nine are: ARM, Worldpay, GKN, Sky, Shire, Merlin Entertainment, Randgold Resources, RSA and Morrisons

Even so, the UK stock market has lagged on the global stage.

Within the UK market, dollar and overseas earners have generally done best, while domestic plays have lagged. Although the pandemic and the disruption it caused to both demand and supply chains means it is unwise to be too dogmatic about Brexit being the sole influence here.

These trends can also be seen in individual stock performance, where dollar and commodity plays have excelled. Perceived growth stocks, or plays upon them, such as Ocado and Scottish Mortgage, have also had a stunning run, although they have lost their lustre of late amid fears over inflation and rising interest rates, both of which represent the direct opposite of the environment in which they did so well for so long.

*All performance data as at week ending Friday 10 June