Total payments peaked at £85.2 billion in 2018 and 2022 is expected to get tantalisingly close to that mark, although analysts’ estimates have begun to lose a little momentum.

After three consecutive increases for 2022 dividend forecasts have dropped for the first time, sliding from £85.1 billion to £83.7 billion. (The final quarter of 2021 has also seen analysts trim their estimates for that year for the first time since the July-to-September period in 2020, thus ending a run of four straight quarterly upgrades). A drop in industrial and precious metal prices, and particularly iron ore and copper, has weighed on forecasts from the all-important mining sector. 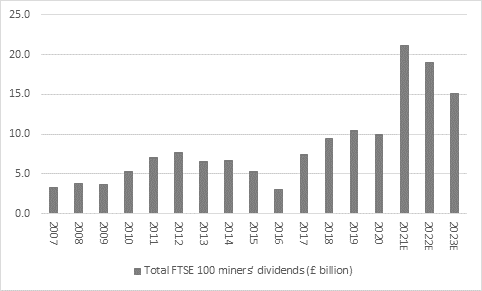 It also remains to be seen whether companies start to lean more toward share buybacks when it comes to return cash to shareholders, in light of the UK Government’s one-and-a-quarter percentage point increase in dividend taxes, or whether the pensions’ regulator’s threat to challenge dividend payments made by firms with pension deficits affects boardrooms’ dividend policies.

Excluding Johnson Matthey and Darktrace, who have both tumbled out of the FTSE 100 index in December, shortly after announcing share buyback programmes, no fewer than 22 FTSE 100 members have announced buyback schemes in 2021, to the tune of £18.7 billion.

Shell and Diageo have already made clear their intention to buy back more shares in 2022. 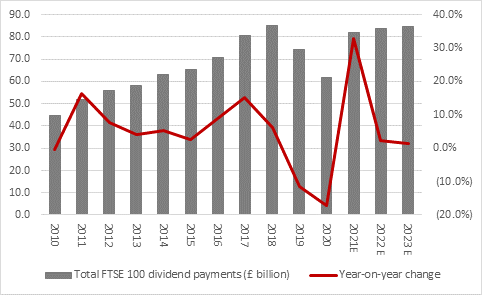 By contrast, just three FTSE 100 firms – JD Sports Fashion, Severn Trent and Prudential – have tapped investors for money so far in 2021. Prudential is aiming its £2.1 billion raising solely at the Hong Kong market so UK-based investors have only had to hand over £714 million to FTSE 100 firms so far in 2021, compared to £16.3 billion of fund raisings in 2020, although a couple of secondary blocks of stock were placed in now-former member Darktrace in the autumn.

That may offer some encouragement to those with hefty exposure to UK equities, bearing in the mind the adage about how ‘bull markets end when the money runs out.’ At the moment, dividends and buybacks mean more money is flowing in than is flowing out owing to initial public offerings, secondary placings of stock and secondary fund raisings, but this is a trend which must be monitored. A sudden rush of deals could be a potential red flag, especially if quality declines as numbers grow – at least if history is any guide.

For the moment, however, cash is flowing into investors’ pockets and not out, even if dividend forecasts have stopped growing, at least for now. 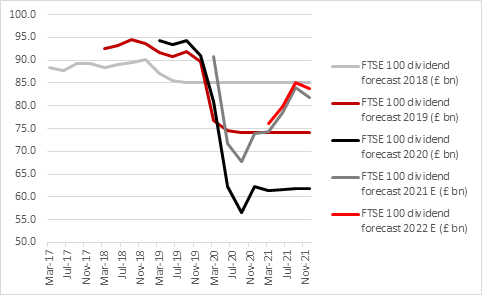 Meaty increases in dividends at Glencore, Shell, HSBC, Lloyds and the resumption of payments at Flutter Entertainment look set to just do enough to offset anticipated falls at Rio Tinto, GlaxoSmithKline (thanks to a change in corporate structure), Anglo American, Evraz and Antofagasta.

This again highlights the importance of the miners to the overall direction of FTSE 100 profits and dividends, something which may also attract the attention of those investors who run strict ethical, social and governance (ESG) screens before they decide where to put their capital.

One other reason why dividend growth may be slowing (and estimates sagging slightly) is that dividend cover is improving. Companies may be choosing to let earnings growth outpace dividend growth so they can reinvest in their businesses, bolster balance sheets and rebuild cover, so that their shareholder distributions are not quite the hostage to fortune that they proved to be in 2020, should another unexpected shock emerge from left field.

The aggregate earnings cover ratio for the FTSE 100 is now seen rising to 1.95 times in 2022, according to analysts’ consensus and dividend forecasts.

That is a further improvement on 2021’s 1.85 times earnings cover and the skinny 1.59 times ratio served up in 2020. A further gain to 2.03 times is expected by analysts in 2023, to take earnings cover to its highest level since 2014, which was the last time cover reached the comfort zone of 2.00 times or higher. 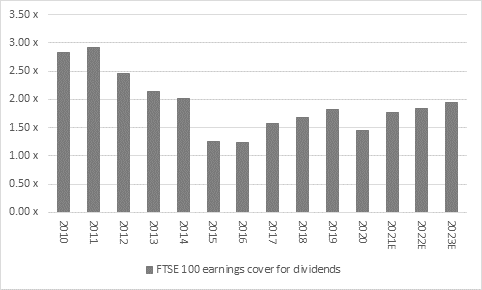 A renewed drop in economic activity – for whatever reason – could still pose a big risk to dividend forecasts all the same.

Analysts currently believe that 2022’s (adjusted) net profits will exceed not only the pre-pandemic peaks of 2018 but the current all-time high of 2011, when commodity prices were roaring higher, and miners and oil producers generated 42% of the FTSE 100’s profits between them. 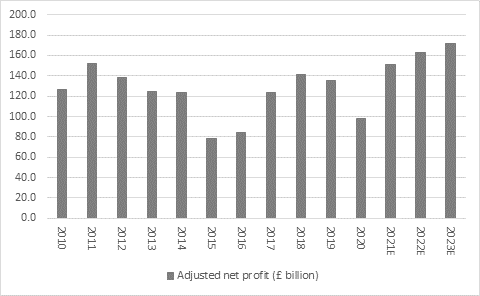 Oils and consumer discretionary stocks are expected to drive the forecast 6%, or £14.2 billion increase in aggregate FTSE 100 pre-tax profit for 2022, as miners and financials both see lower earnings. The forecast drop at miners reflects lower industrial metal prices (and higher costs), while the banks’ profits in 2021 are likely to have been flattered by write-backs relating to the bad loan provisions they took in 2020.

If the economy offers little or no assistance – or even hinders – then these earnings forecasts, and by extension, dividend payment estimates could find themselves exposed to the downside.

Equally, an unexpectedly strong recovery, and one that sparks higher commodity prices as inflation takes a grip, could leave oils, miners and – by extension – the FTSE 100 in clover.

Investors must therefore assess concentration risk when it comes to dividends as well as earnings, an issue which has dogged those who have sought income from the UK stock market for some years.

Anyone who believes the UK stock market is attractive on a yield basis, and looking to buy individual stocks, glean access via a passive index tracker or even buy a UK equity income fund needs to have a good understanding of, and strong view on, those 20 names in particular.

Rio Tinto is expected to be the single biggest paying stock within the FTSE 100 in 2022 but Shell and British American Tobacco are not expected to be far behind it.

This may have ESG-oriented investors gnashing their teeth, especially as they may argue both firms are acting too slowly in their attempts to shift their business mix to more renewable sources of energy. Shell and fellow oil major BP, also a top-ten dividend contributor, have a tricky balancing act as they look to get the best out of their existing assets, reinvest for the future (without overpaying here, amid the mad scramble for ‘green’ assets) and keeping shareholders sweet with cash returns.

That said, Shell is starting to increase its dividend on a quarterly basis and both it and BP are also returning cash to investors via share buybacks.

At the time of writing, Evraz is the highest-yielding individual stock, closely followed by BHP and then Rio Tinto.

Forecast of yields of more than 10% may make investors a little wary, given the shocking record of firms previously expected to generate such bumper returns, including Vodafone, Shell, Evraz itself and – when they were still in the FTSE 100 - Royal Mail, Marks & Spencer and Centrica. All were forecasts to generate a yield in excess of 10% at one stage or another and all cut the dividend instead.

BHP’s likely disappearance from the FTSE 100 in 2022, when it adopts a Standard rather than a Premium listing and makes its primary base Australia, is another factor for investors to ponder, at least if they are seeking to glean yield from index-tracking funds.

History suggests that it is not the highest-yielding stocks which prove to be the best long-term investments anyway (although the past is by no means a guide to the future).

Often defending a high yield can be a burden for a firm, as it sucks cash away from vital investment in the underlying business, or can be a sign that the company is in trouble and investors are demanding such a high yield to compensate themselves for the (perceived) risks associated with owning the equity.

The strongest long-term performance often comes from those firms that have the best long-term dividend growth record, as they provide the dream combination of higher dividends and a higher share price – the increased distribution will over time drag the share price higher through sheer force. A 1p per share dividend on a 100p share price may not catch the eye, but if that dividend reaches 10p in a decade’s time it almost certainly will.

The ravages of the pandemic and the recession have taken their toll on the ranks of FTSE 100 firms that can point to a ten-year dividend growth track record. One year ago, 24 firms were on this list. That number has since dwindled to 16 even as National Grid, United Utilities and Dechra Pharmaceuticals joined this elite grouping in 2021, the last-named by dint of its promotion to the index in December.

Hikma Pharmaceuticals is working on a nine-year dividend growth streak and will therefore be looking to rack up a tenth and join this list in calendar 2022.

Even allowing for the potential changes and deletions to the list of dividend-growers over time, those that managed to maintain their proud runs in 2020 and 2021 have been tremendous long-term investments (although in many cases the final dividend payments for 2021 will be declared in calendar 2022).

The average capital gain from the sixteen ten-year dividend growers is 666% and the average total return is 831%.

Admittedly, the strategy is not infallible and woe betides any firm where investors think a dividend growth streak is under duress or about to end. Vodafone was a prime example of this in 2018-19.

Careful research is therefore required to ensure that winning streaks can continue. But fifteen of the sixteen firms to have increased their dividend in each of the last 10 years have outperformed the FTSE 100 in capital terms, with British American Tobacco the sole exception. In total return terms, fifteen have done better than the FTSE 100 index, with BAT again the exception that proves the rule.

The tricky bit is that only six of the sixteen were actually in the FTSE 100 a decade ago: BAT and RELX (founder members in 1984), United Utilities (joined as North West Water in 1990), National Grid (1995), Sage (1999) and Diageo (2000). As a result, investors may need to burrow through the FTSE 250 if they are looking for the next generation of dividend growth champions, as Dechra Pharmaceuticals’ stunning dividend growth record and rise through the ranks suggests.

Dividend growth is so powerful because it almost inevitably drags a share price higher.

But their below-average yields have hardly proved a barrier to excellent total returns over the subsequent ten years.

That is at least partly because, the dividend yield available on the December 2011 share price using forecast 2021 dividends is 9.8% - and if anyone offered an investor a guaranteed 9.8% dividend yield they would probably snap your hand off, so that shows how a rising dividend can lift a share price, boosting income and capital gains for a powerful total return.

View our Dividend dashboard for Q4