Investing in emerging markets – is it worth the risk?

Investing in emerging markets – is it worth the risk? The MSCI All Country World Index, a performance benchmark for the global stock market, includes a 12% chunk called ‘emerging countries’.

Though there’s no single measure for what an emerging country is, one common metric uses gross domestic product (a common measure of income) per person. The richest countries are labelled as advanced or developed, with the remaining countries classified as either ‘emerging’, or for the lowest income, ‘developing’. The International Monetary Fund, commonly known as the IMF, maintains its own classification list of advanced, emerging and developed economies.

Given that developed or advanced countries make up 88% of the global stock markets, it may surprise you to learn how few of them there are. The smallness of their relative share of the global economy is eye-opening too. To highlight the growing importance of emerging markets for the global economy, we’ll look at some data provided by the IMF.

The IMF define only 39 countries (20%) as advanced economies, with the remaining countries either emerging or developing. These 39 countries represent 42% of the global economy: significantly lower than their share in the stock market. That’s a significant drop from the 62% share back in 1980, and the IMF predicts it will continue to fall. Put another way, despite representing just under an eighth of global stock markets, emerging and developing nations make up well over half the global economy. They’re expected to continue to grow at a faster rate, too: 6.7% in 2021, compared to an advanced economy growth rate of 5.1%. 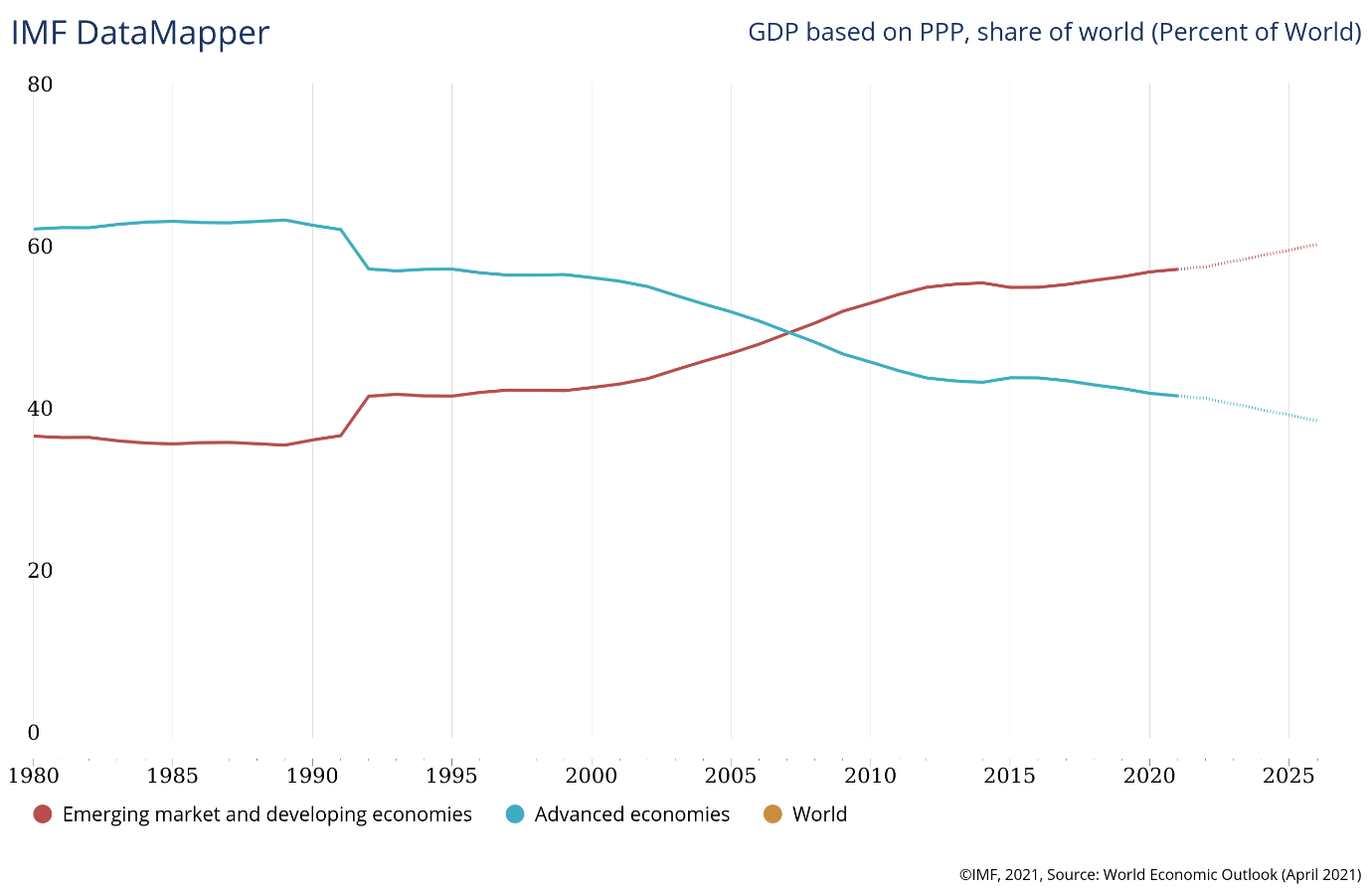 So why does this matter?

Over the longer periods of time in which it's generally advisable idea to hold your investments, the value of economies and the value of their stock markets tends to coalesce. Warren Buffet once described the Market Capitalisation to GDP ratio (a measure of this relationship) as the best single measure to determine if stock markets are over- or under-valued. The below graph from Factset shows how the share of emerging markets has grown over the last 30 years – from around 1% to 12% at the end of 2020. Given the share of the global economy, this trend is likely set to continue. 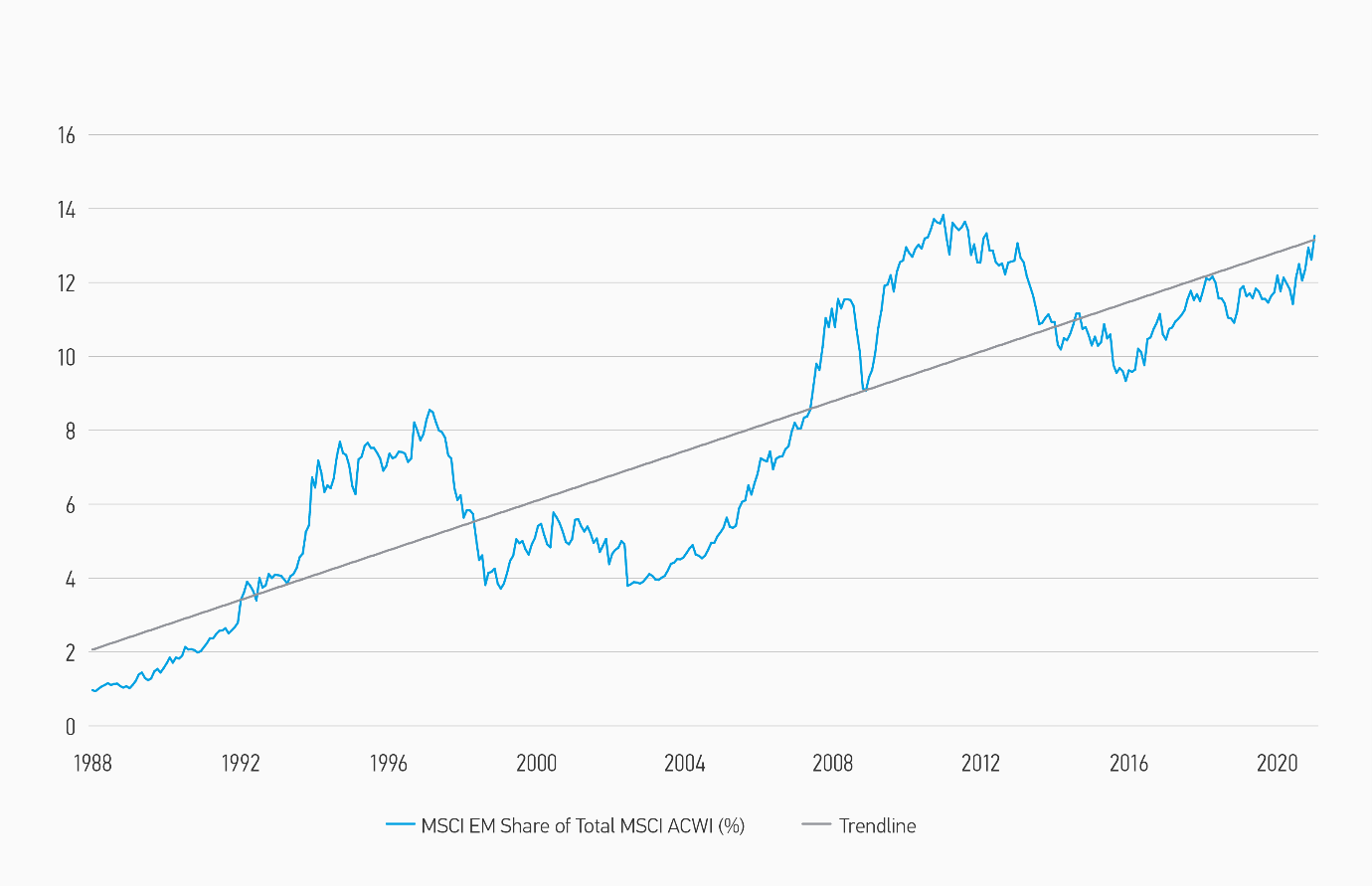 What about the risks?

It’s true that investing in emerging markets is risky. Recently, we’ve seen the Chinese market sustain large losses due to rising political risks, both domestically and internationally. In fact, despite the high growth rates and growing economies, emerging stock markets have underperformed over the last few years.

However, when investing for retirement, saving for a child or even just putting away for a rainy day, your timeframe is often measured over decades rather than years.

We launched the VT AJ Bell Global Growth Fund in June 2018. Over the last three years to the end of July 2021, it has delivered a return of 26.1%. As well as being positioned towards high-growth sectors in the US, such as technology, just under a quarter is invested in emerging markets. That’s double the rate of global stock market indexes. We’ve positioned the fund much more closely to its economic share compared to traditional market indexes.

Despite being the highest risk fund we offer, it’s proved popular with our customers, with assets approaching £100 million. So if you have a long time horizon, can tolerate significant drawdowns over periods of a year or more, and want to be positioned towards emerging countries that are a large and growing part of the global economy, the VT AJ Bell Global Growth fund could be for you.

Get investing, and leave the hard work to us

Matt Brennan is Head of Passive Portfolios at AJ Bell and is responsible for the day-to-day running of the AJ Bell funds. He has over six years’ experience in financial services, having previously worked at Brown Shipley as a Senior Fund Manager and Head of Fixed Income Research, with specific responsibility for managing a discretionary fixed income fund. He also formed part of a four-person fund management team that ran the company’s multi-asset funds. Matt graduated from the University of York with a first class Masters degree in Mathematics, and is a CFA Charter holder.