As Unilever shares wallow at a historically low valuation, AJ Bell’s Head of Investment Analysis, Laith Khalaf, examines the bull and bear case for the stock:

“Several lifetimes ago, in 2018, Unilever tried to move its headquarters from the UK to the Netherlands, prepared to forfeit its place in the prestigious FTSE 100 as a result. British shareholders revolted, and in the toxic aftermath of the Brexit vote, the consumer goods giant was forced into a humbling volte-face. Three years on, the company has unified its dual legal structure, but this time in London rather than Rotterdam (it seems the Dutch are a bit more chilled out about this sort of thing). Investors haven’t rewarded the company for its simplification by buying its stock though. The share price is down 13% so far this year, while the wider FTSE 100 has risen by about 11%.

“This is a reversal of fortunes for the former stock market darling, which at one point last year was the most valuable single stock in the Footsie. Not bad for a firm that makes Cornettos, Domestos and Marmite. The bull and bear case for Unilever are now more evenly balanced than they have been for some while, which is reflected in the fact the stock is trading at a very low valuation compared to its recent history (a forward PE ratio of 17.5x, see chart below). The fact the company managed to maintain sales momentum throughout the pandemic underlines the strength of the business, though having a suite of hygiene brands at a time when everyone was obsessing about cleanliness clearly helped too. But as the pandemic has receded, a number of concerns have led markets to reassess the prospects for Unilever.

“One worry is the ongoing costs of restructuring the business, which are soaking up a not inconsiderable amount of money, to the tune of €1 billion this year and next. Markets would probably be willing to shrug that off if they could see it yielding results, but instead it simply seems to be keeping growth plodding along rather than accelerating. Inflation has also spooked the market, and will test the strength of Unilever’s brands as the company seeks to offset rising raw material and distribution costs by increasing consumer prices. In response, Unilever has pushed product prices up 4% in the last year. Cheaper competitors will be facing the same cost challenges, but if consumers really start feeling the pinch, the risk is they might start ditching Hellmann’s in favour of supermarket own brand mayonnaise.

“Rising interest rates also present a problem for Unilever, not so much as a business, but as an investment. The stable, reliable cash flows the business produces have made the company a ‘bond proxy’, in other words a safe haven that investors have flocked to because the yield on cash and bonds has been so shockingly low. If yields start to rise, cautious investors might gradually be tempted out of stocks like Unilever, and back to their natural habitat of bonds. That will probably take some time, but markets might price in the shift more imminently if they get a whiff that interest rates are going to rise swiftly – though that seems an unlikely prospect.

“While it’s undeniably going through a sticky patch, Unilever is still a quality business. It has a sound balance sheet and a high profit margin, even if that’s been taking some of the strain recently. Irrespective of where its headquarters are, it’s a geographically diverse business with revenue streams coming from across the globe, including fast growing emerging markets. A staggering 2.5 billion people worldwide use its products every day. So Unilever finds itself in a bit of a Marmite moment, when investors have to decide whether they love it or hate it. Poor relative performance of late will likely shake off some investors who think better returns can be had elsewhere, so things may well get worse before they get better. However, the recent share price weakness offers a tempting entry point, and an income yield of 3.8% looks pretty attractive, particularly when you consider the company’s track record of growing the dividend.” 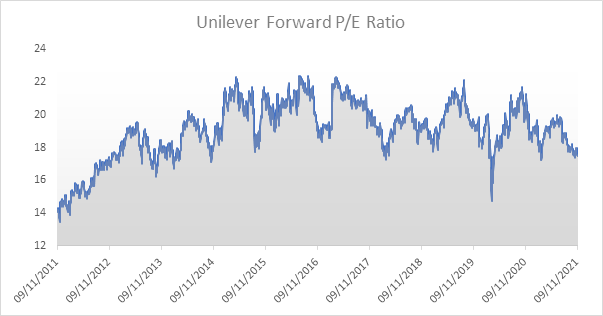 Source for figures and chart: Refinitiv

The decision by Royal Dutch Shell (RDSB) to tidy up its corporate structure has gone down well with the stock market.

FTSE 100 on verge of full recovery from Covid crash

The FTSE 100 is a whisker away from finally clawing back all the lost territory caused by the global market crash in February 2020.

“The FTSE 100 made a tepid start to the week on Monday despite some positive economic news from China,” says AJ Bell Investment Director Russ...

Rising interest rates: what they mean for investments

Bank of England governor Andrew Bailey may have earned the tag of an ‘unreliable boyfriend’ after the Bank’s Monetary Policy Committee confounded market expectations and...

There is no reason why a share must open at the previous night’s closing price. Daily price moves are determined by supply and demand for...