Muted market response to iPhone 13 is the rule, not the exception Apple’s shares didn’t do much at all in response to boss Tim Cook’s launch of iPhone 13 and updated versions of its Watch and iPad, but this seems to be a normal trading pattern for product releases from the tech giant and as much the result of the old formula of ‘buy on the rumour and sell on the fact’ as anything else.

In the six months before prior next-generation product announcements Apple’s shares have risen by an average of nearly 23% but in the three-month and six-month periods afterwards they have advanced by an average of just 3.3% and 9.3% respectively.

However, a lot does ride on the latest iteration of the iPhone and shake-up of Apple’s product range. The firm continues to encounter anti-trust pressure from regulators regarding its App store – and its monster $2.4 trillion market capitalisation means that any slip or loss of earnings momentum could leave shareholders with a problem.

A forward price/earnings ratio of nearly 27 times prices in a lot of future growth – and analysts have pencilled in just 5% sales growth and 2% earnings per share growth for the year to September 2022.

Hard to believe as it may be, this leaves Apple with something to prove, in terms of its ability to keep regulators sweet, persuade customers to upgrade to 5G mobile devices and shareholders that expected 70% surge in earnings per share in the year to September 2021 was not just a one-off, owing to the pandemic, lockdowns and a surge in working from home – sales growth in Mac computers and iPads showed marked signs of a slowdown in the last fiscal quarter, to June. 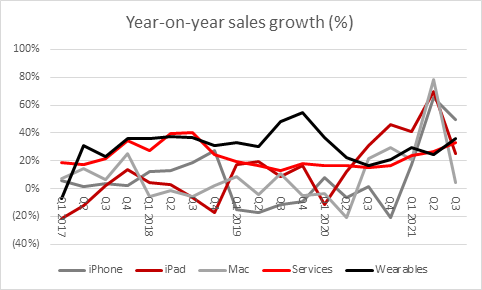 Apple has already suffered four induced profit slides in the past decade, and the first three were largely related to the iPhone’s product cycles and its functionality, price points and demand in China (the early stages of the pandemic contributed to the last one). The subsequent share price surge may mean that January 2020’s crunching profit warning is but a distant memory, but it does not mean it cannot happen again in the latest set of product features fail to capture consumers’ imaginations. 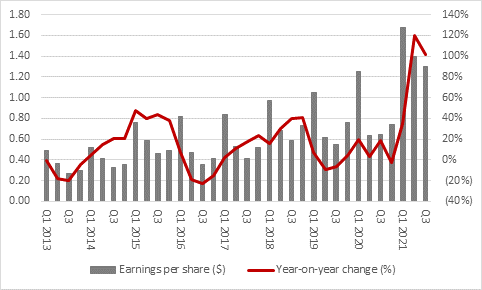 As the market cap suggests bulls of the stock consider this an unlikely development, especially as 5G services and networks continue to roll out and it has not been wise to bet against Apple under the guidance of either Steve Jobs or Tim Cook. Even considering greater regulatory scrutiny there seems little reason to expect app sales to stumble, barring perhaps a nasty recession, and they also make Apple customers sticky and more likely to upgrade their devices in the future, creating a bit of a virtuous circle.

It may therefore take a bigger-picture development to get Apple’s share price momentum to sour. The shares lost 30% of their value in a month between February and March 2020 as the pandemic began to sweep around the world as investors looked to raise cash as best they could and taking profits in Apple was a quick and simple way to do it.

A surprise increase in interest rates could take its toll, given Apple’s growth stock status, as could a strong, inflationary economic recovery – there would less reason to pay a premium earnings multiple for Apple’s growth profile if beaten-down cyclical, value stocks were showing the same if not faster growth on a lower rating.