Good Money Week kicks off on Saturday 24 October, in the midst of a bumper year for ethical fund sales and a snowballing spotlight on investing sustainably. But does investing according to your principles mean accepting a lower financial return?

To address this question AJ Bell has analysed funds with a 10 year performance record in the IA UK All Companies and IA Global sectors. These are the two most popular sectors with retail investors by far, accounting for approximately £190bn of assets.

These numbers show investing ethically is perfectly compatible with getting an exceptional return over the long term. The number of ethical funds on the market has been growing rapidly and that means investors can now afford to get a bit more picky when it comes to choosing a fund with performance pedigree.

UK ethical funds have done particularly well compared to the market with the average fund showing a clean pair of heels to the benchmark FTSE All Share Index. As ever the devil is in the detail and some funds have let the side down, in particular some of the older UK tracker funds where returns have been eroded by high charges.

On average global ethical funds have done even better in the last ten years than their UK counterparts. But they have fallen behind the MSCI World Index which has been driven relentlessly upwards by the remarkable performance of the US stock market.

On the one hand then, global ethical investors might feel short-changed, but the delivery of high absolute returns while meeting an ethical investment policy should quell any major concerns. The global sector is also heterogenous in its make-up and some ethical funds are pursuing specific investment themes like clean water and urbanisation, which make comparison with the index and the sector less meaningful.

Some global ethical funds have managed to beat the benchmark index which demonstrates that even against the high bar of the MSCI World Index it’s possible to post outperformance while following a responsible investment framework.

Performance of ethical funds in the IA UK All Companies sector

Strong ethical outperformance has been achieved by a combination of luck as well as judgement. That’s because responsible funds tend to have less invested in the big blue chips, which have underperformed compared to medium sized and smaller companies (see table below).

There are some notable laggards in the sector though. Bringing up the rear of the performance table are two passive funds. Passive funds replicate the performance of the index they are tracking, but lag after charges are deducted. The size of the lag depends on the level of charges and the time investors hold the fund. Where charges are high and the investment horizon is long there can be a damaging drag on performance.

The Family Ethical fund is the worst performer, underperforming the FTSE All Share by 24.4%. More relevantly it’s underperformed the index it tracks, the FTSE 4Good UK 50 index, by 20.9%. Over 10 years it’s turned £1,000 invested into £1,390, compared to £1,600 from the FTSE 4Good UK 50 index and £2,040 from the average UK ethical fund. That’s simply a reflection of the compound effect of annual charges of 1.5%, which eat into the fund’s performance year after year. Investors do get an ISA wrapper into the bargain, but that still doesn’t look like great value compared to other options available to investors.

Sources: FE,to 30/09/2020
Averages for ethical and non-ethical funds are based on the performance records of those funds with a ten year record only.

Performance of ethical funds in the IA Global sector

The picture is more nuanced for ethical funds in the global sector. The average global ethical fund with a 10 year performance record has outperformed the average UK ethical fund providing a total return of 150.1% since 2010 compared to 103.8%.

However the bar is set higher in the global sector because of the relative performance of the benchmark index, the MSCI World Index, which itself has been driven higher by an extremely hot US market. Compared to this index the average global ethical fund has underperformed, returning 150.1% compared to 198.6%, and has also failed to match the average non-ethical fund in the sector, which has returned 176.2%.

Given the extremely strong absolute performance of ethical funds in the global sector, it’s difficult to say investors should be disappointed but technically as a group they have underperformed.

There have been some funds which have managed to outpace the racy MSCI World Index though. The Liontrust Sustainable Future Global Growth fund tops the performance chart; it has turned £1,000 invested into £3,670, compared to £2,990 from the MSCI World Index.

There has been a glut of new fund launches in this sector in recent years, and there are now 57 funds available in the sector, which means there are now many more options for investors, albeit with shorter track records.

Source: FE to 30/09/2020
Averages for ethical and non-ethical funds are based on the performance records of those funds with a ten year record only.

Unless there are heavy withdrawals from the sector in the next few months, ethical funds are on course to have a record-breaking year in terms of retail fund sales, as the chart below shows. And that’s after a bumper 2019.

Ethical funds will hope to emulate the success of tracker funds in hitting the mainstream of retail investing. In 2010 less than £7 in every £100 was held in passive funds- that now stands at £18.

As more ethical funds launch on the market, and reach the critical three year performance record which is often used as a bare minimum by professional and retail investors, we can expect flows into these funds to continue to blossom. 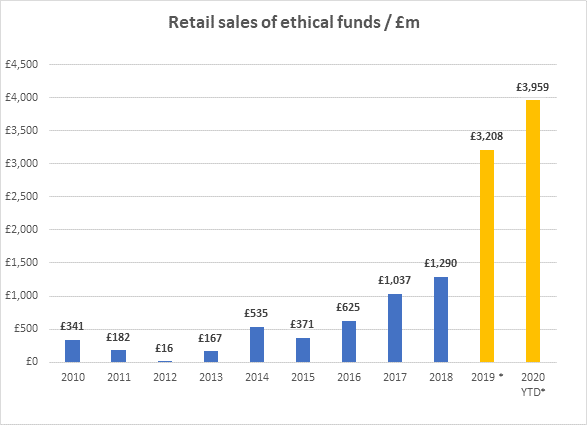 Ethical fund launches have slowed down this year compared to 2019, probably a reflection of the practical difficulties COVID restrictions have thrown up for fund groups. With a few months left to go however, it’s still looking like a strong year for new funds hitting the market.

Looking back 2012 was an anomalously heavy year for ethical fund launches and was only recently bettered in 2019. That can probably be attributed to two big changes which swept through the investment industry in that year. The Retail Distribution Review led to new share classes being introduced after funds were prohibited from paying ongoing commission and at the same time the arrival of pensions auto-enrolment opened up the door for fund groups to lodge new funds in pension plans. 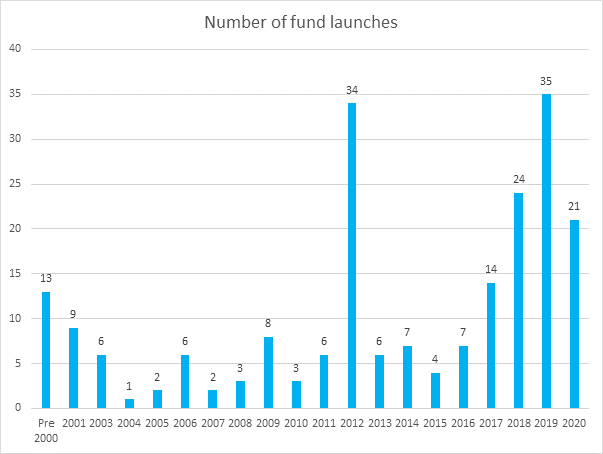 Liontrust Sustainable Future Global Growth
Peter Michaelis, head of the sustainable funds team at Liontrust, has been investing in sustainability since 2001. This fund invests across the global stock market in companies that are driving sustainable growth. The fund doesn’t use negative screening - it selects companies on their positive societal benefit, based on around 20 sustainable growth themes identified by the Liontrust team.

Royal London Sustainable Leaders
Manager Mike Fox has been involved in this fund since 2003 - it actually started life at the Co-op. It invests exclusively in the UK stock market and seeks to invest in companies which demonstrate a net benefit to society. The portfolio is constructed using a quantitative and qualitative approach which scores companies according to their sustainability and financial credentials.

Stewart Investors Worldwide Sustainability
The fund invests across the globe in companies that are positioned to benefit from the sustainable development of the countries in which they operate. Manager Nick Edgerton has been managing the fund since 2012 (as co-manager until 2016). He assesses companies based on their social utility and environmental impact, as well as the quality of the management and financial performance.

These articles are for information purposes only and are not a personal recommendation or advice. Past performance isn't a guide to future performance, and some investments need to be held for the long term.

END_OF_DOCUMENT_TOKEN_TO_BE_REPLACED
The value of your investments can go down as well as up and you may get back less than you originally invested. We don't offer advice, so it's important you understand the risks, if you're unsure please consult a suitably qualified financial adviser. Tax treatment depends on your individual circumstances and rules may change. Past performance is not a guide to future performance and some investments need to be held for the long term.