Is the WeWork fiasco a warning of wider market volatility ahead?

Is the WeWork fiasco a warning of wider market volatility ahead? Wednesday’s 3.2% fall in the FTSE 100 is getting the new month off to a bad start and it may prompt some investors to think of the comment made by Mark Twain’s character Pudd’nhead Wilson: ‘October: This is one of the peculiarly dangerous months to speculate in stocks. The others are July, January, September, April, November, May, March, June, December, August and February.’ Despite the plunge, the FTSE 100 index is still up for the year and volatility is still very subdued by historic standards.

Quiet equity markets tend to provide better returns than choppy ones – but unusual calm can lead to unusual risk-taking, which in turn leads to over-exuberance, poor capital allocation and eventually volatility’s return with a vengeance as poor (or simply over-valued) investments falter and confidence finally cracks.

In general, there do seem to be four clear ‘cycles’ when it comes to market volatility

It is not hard to work out where we are now.

Even if the 3.2% fall in the FTSE 100 was eye-catching, that was just the thirty-first time this year when the index had moved by 1% of more from open to close in 2019 and just the eighth when it had gained or lost more than 2%. 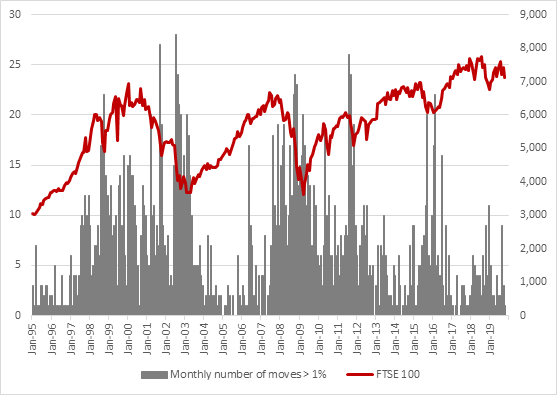 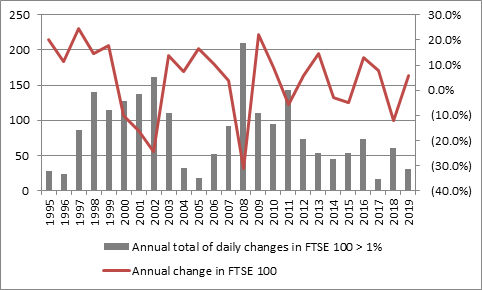 It therefore does not quite feel as if the stock market is about to immediately turn down but experienced investors will also remember how long periods of below-average volatility in 1993, 1996, 2005-06 and (to a much lesser degree) 2017 and 2018 preceded sudden market dislocations of varying length and depth.

Trouble often starts in far-flung places, which often only do well when liquidity is abundant and risk appetite is running high and which quickly falter when both go into reverse. In response to that trouble, investors huddle in a diminishing circle of assets that are perceived to be ‘safe,’ which ultimately prove to be the final dominoes to fall.

It remains to be seen whether the WeWork fiasco provides a tipping point but the high coupons demanded by investors before they funded Aston Martin and Metro Bank, the latest sharp drop in Bitcoin (down by nearly 25% in a month in dollar terms) and ructions in the US inter-bank funding markets suggests that either liquidity is getting tighter or confidence is wobbling a little or both. Strength in the dollar and a resilient gold price would also suggest there is some demand for haven assets.

Any sustained pick-up in volatility could therefore be a warning sign and, after the market’s loss of faith in some more esoteric or risky asset classes and investments, investors might like stress test their portfolios, to ensure that they have not over-reached themselves and that risk is properly calibrated according to their well-defined long-term goals and target returns.

Managing your pension in your 20s and 30s

5G revolution: How to invest in the new era of communications

Should BP have cut its dividend more?

END_OF_DOCUMENT_TOKEN_TO_BE_REPLACED
The value of your investments can go down as well as up and you may get back less than you originally invested. We don't offer advice, so it's important you understand the risks, if you're unsure please consult a suitably qualified financial adviser. Tax treatment depends on your individual circumstances and rules may change. Past performance is not a guide to future performance and some investments need to be held for the long term.