Companies with strong brands are often seen by investors as a good hedge against inflation, because those brands command customer loyalty and sticky customers are more likely to pay up for the products and names they cherish.

Unilever’s first-half results go a long way to supporting that theory, because profits are up despite input cost increases, higher investment in key brands and lockdowns in China. But there is still work to be done with profit margins going down.

It may make central bankers’ toes curl as they look to combat inflation, and supermarkets may be concerned about finding themselves sandwiched between value-conscious shoppers on one hand and brand owners on the other, but shareholders will take comfort from how Unilever is increasing prices. In the second quarter, the Hellmann’s-to-Dove group generated underlying sales growth of 8.8%, a big step up from the 4.4% advance between January and March.

This will come as a welcome relief to investors, who had started to question whether Unilever was beginning to lose its way as underlying sales growth slowed and began to undershoot management’s target of trend growth of 2% to 4% a year. This year’s failed lunge for what is now known as Haleon, GSK’s former consumer goods business, suggested the board had begun to have doubts of its own, too. 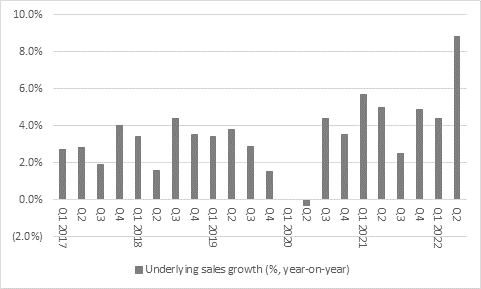 Underlying top line growth now looks set to exceed management’s prior guidance for this year of 4.5% to 6.5%, thanks in the main to price increases. Helped by its powerful and well-tended brands, Unilever pushed through an average underlying price increase of 11.2% and in response volumes dropped just 2.1%. 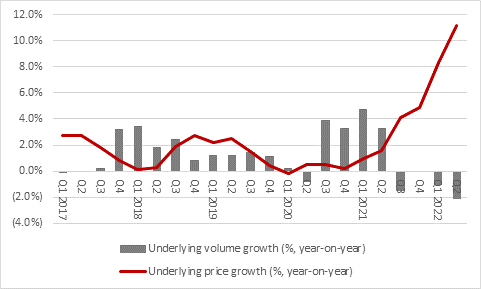 However, brands need constant nurturing and Unilever sensibly continues to invest in them for the long term. This will weigh on short-term margins, especially as the company expects to swallow €4.6 billion of net input cost inflation in 2022, a figure that equates to 8.7% of last year’s €52.4 billion in sales and one that again shows the importance of the pricing power much-loved brands can confer.

Despite that hefty price hike Unilever still therefore expects its operating margin to slide to 16% this year, down from 18.4% last year.

The old 20% margin target laid down by chief executive Alan Jope is therefore getting further away, but Unilever is not standing still, and nor can its management team afford to do so now that activist investor Nelson Peltz has a 1.5% stake and a seat on the board. Whether all investors feel comfortable with someone with a relatively minor holding having such influence remains to be seen, but Unilever seems confident that profit margins will rise again in 2023 and 2024.

Analysts seem to agree, and this is down to the combination of price increases, sales mix and also cost savings. 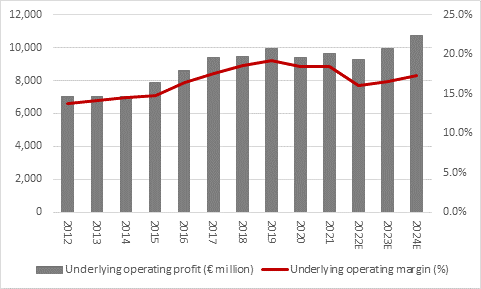 From 1 July, Unilever has implemented a new corporate structure designed to slim down group overhead. It is based on five operating segments – Nutrition, Personal Care, Home Care, Beauty & Wellbeing and Ice Cream – and comes with four well-defined strategic thrusts: a focus on the brands which each produce over €1 billion in annual sales; a reshaping of their portfolio toward higher-growth areas, helped by asset purchases and disposals; a renewed focus on growth in America, China, India and emerging markets; and ongoing development of the online offering (which cuts out sections of the value chain such as big supermarkets).

So far, investors like what they see. After a good run the share price has finally made up the ground lost amid the fall-out from January’s approach for Haleon, which prompted Mr. Jope to promise that no other big deals would be considered. 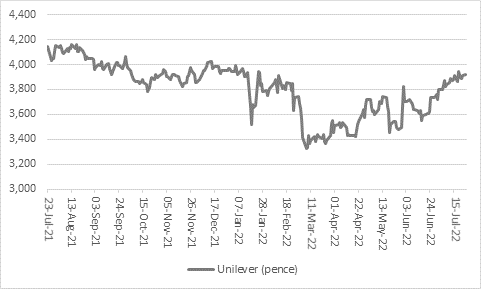 However, there is still much to be done. Unilever’s shares trade at a notable discount, on an earnings basis, to those of the company’s global peers (with the ironic exception of Kraft-Heinz, which made an unsuccessful bid for Unilever in 2017).

If Mr. Jope and the board, aided and abetted by Mr. Peltz, can meet growth and margin targets then that gap could close, and the shares may make further progress