Walmart issues profit warning as it suffers from inflation, excess stock and pressure on consumer spending When one of the world’s largest retailers dishes out a profit warning, investors really need to pay attention and Monday’s trading alert from Walmart offers evidence of three trends to ponder.

And all three may prove just to be just as important on this side of the Atlantic, so anyone with shares in leading UK-based and UK-listed retailers has some research and some thinking to do, especially after Wickes’ warning that the DIY boom may be cooling.

First, Walmart is discounting to shift excess inventory – although anyone who bothered to look at its first-quarter balance sheet back in May would have seen that one coming.

Second, inflation is boosting the top line but eating away at margins and therefore profits, a trend which the discounting will only accentuate.

Finally, consumer discretionary spending may be coming under pressure thanks to food and fuel prices. Those non-discretionary items must come first and if spending elsewhere has to fall as a result then ‘so be it’ seems to be the message from American consumers.

The Walmart warning is a reminder that investors should look at the balance sheet first, the cash flow second and the profit and loss account third (and not the other way around). If there’s trouble brewing, it will usually show in the balance sheet and cash flow, as they are a lot harder to flatter and massage than earnings figures.

Lo and behold, Walmart’s balance sheet had showed how growth in inventory – stocks of goods on its shelves and in its warehouses - had outpaced growth in sales in both percentage and absolute dollar terms for five straight quarters. 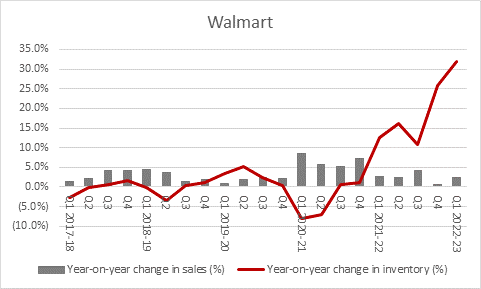 Something had to give. Either consumers started spending again or Walmart was going to find itself discounting to get rid of the excess product. An end to ‘stimmy’ cheques and increases in the cost of living stacked the odds against a rebound in consumer spending on ‘stuff’ after the boom during the pandemic and lockdowns, so Walmart is now having to try and price its way out of trouble and sacrifice margin. 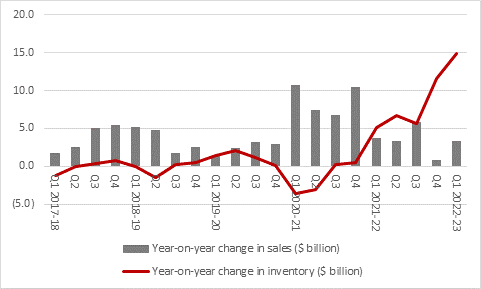 Inflation is therefore both a boon and a curse for the retailer. Food-price inflation is running in the double-digits on a percentage basis, according to Walmart. But the need to discount to shift certain categories of other goods, notably general merchandise and clothing, is crimping margins, as are rising input costs.

As a result, Walmart has raised its guidance for the second quarter’s comparable sales growth to 6% excluding fuel. That compares to the original steer of 4% to 5% growth given alongside May’s first-quarter figures.

But at the same time, it has cut its guidance for operating profit, which is now expected to drop by 13% to 14% year-on-year. That compares to May’s guidance of flat to up slightly, and implies that the operating margin will come in below 5% in Q2 when it was more than 6% a year ago. 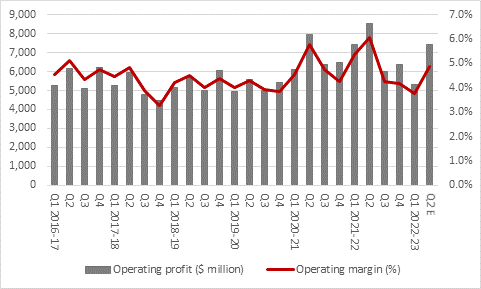 When it comes to the mix in spending, Walmart’s brief statement is clear. Chief executive, Doug McMillon, notes how customers are having to prioritise life’s essentials such as food and fuel. They are coming first and more discretionary items, such as general merchandising and even clothing, are taking a back seat.

The net result is that Walmart’s shares were down 10% in pre-market trading. That wipes out all of the summer’s rally and means the shares are no higher than they were in January 2020, before the pandemic, lockdowns, record low interest rates and stimulus cheques combined to stoke an epic boom in consumer spending. Whether that boom is now turning to a bust remains to be seen, but the evidence of a slowdown is becoming more widespread, as Walmart joins other major US retailers such as Target and even Amazon by coughing up a big profit warning. 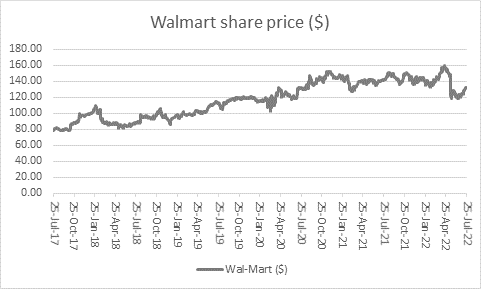