What will the bouncy buck break next?

“Whether it is because the US Federal Reserve is raising interest rates faster than other Western monetary authorities, or because investors are seeking a haven in the form of the globe’s reserve currency, the dollar is trading at its highest levels since late 2002,” says AJ Bell Investment Director Russ Mould.

“Oddly, the US stock market rarely seems to be unduly influenced by where the greenback goes but two other asset classes pay very close attention, namely emerging markets and commodities. They could stay under pressure if the buck stays bouncy, but commodities in particular could make their next upward move if markets start to lose faith in the US currency for any reason. 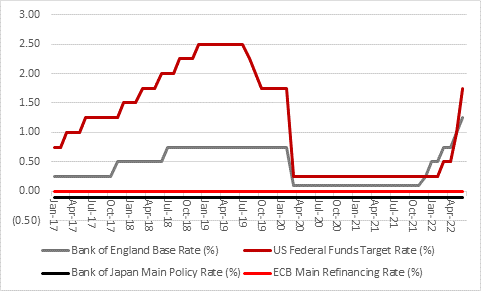 “The last time the dollar – as benchmarked by the trade-weighted DYX (or ‘Dixie’) index – stood at 105 was twenty years ago, when the S&P 500 was in a bear market, the Fed was cutting rates and America was trying to emerge from the relatively mild recession which followed the bursting of the technology, media and telecoms bubble.

“This may have some investors on alert, as Microsoft has already blamed dollar strength for its minor profit warning in early June.

“However, the strong dollar was not the primary source of US equities’ woes back in 2002 – that was the killer combination of lofty valuations and earnings disappointment – and there appears to be little clear relationship between Dixie and US share prices over the long term. 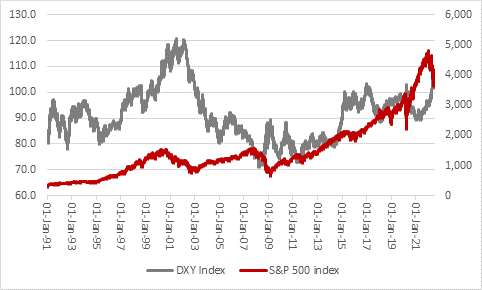 “The interest rate differential between the dollar, yen, euro and pound could be one big reason why the dollar is surging, while another one may be a search for a haven. The US, after all, is home to the world’s largest economy, largest stock market, largest bond market and the country is the world’s leading military power. Given that mix, it is no surprise the dollar is the world’s reserve currency (rather as the pound was before it, in the nineteenth and early twentieth centuries, for similar reasons).

“Equally dollar strength can therefore be a sign of concern, as it can be suggestive of fear, if not distress.

“In this respect, the good news at least is that the DXY index is nowhere near the peak around 120 that it reached at the start of this century of its all-time high about 160 in the mid-1980s (a situation that was only resolved by 1985’s Plaza Accord, when the G5 unilaterally revalued the deutschmark, as they were then, against the US currency).

“However, there are two more tangible reasons for looking at a strong dollar with some concern.

“A rising greenback is not good for commodity demand. All major raw materials, except cocoa (which is traded in sterling) are priced in dollars, so if the US currency rises then that makes them more expensive to buy for those nations whose currency is not the dollar or is not pegged to it. Note how there seems to an inverse relationship between ‘Dixie’ and the Bloomberg Commodity Price index.

“A major bout of dollar strength could therefore help to put a lid on commodity prices and perhaps inflation. 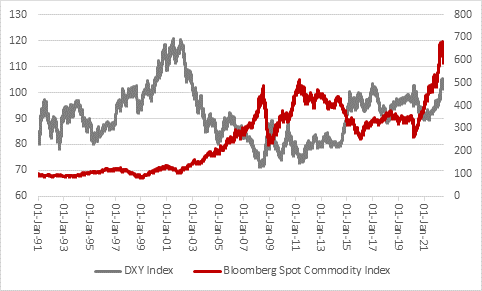 “Emerging equity markets do not appear to like a strong dollar either, judging by the inverse relationship which seems to exist between the DXY and MSCI Emerging Markets (EM) benchmarks. Dollar strength at the very least coincided with major swoons in EM, or at least periods of marked underperformance relative to developed markets, during 1995-2000 and 2012-15. Retreats in the greenback, by contrast, appeared to give impetus to emerging equity arenas in 2003-07, 2009-12 and 2017-18. 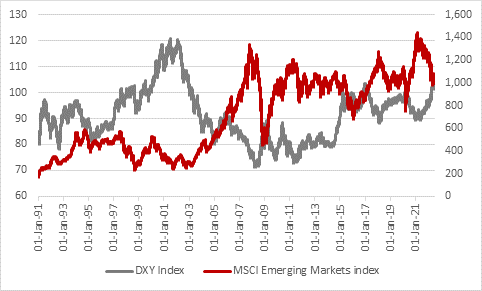 “This also makes sense, in that many emerging (and frontier) nations borrow in dollars and weakness in their currency relative to the American one makes it more expensive to pay the coupons and eventually repay the original loans. The higher the buck bounces, the more uncomfortable those debts become as interest payment suck away cash that could otherwise be used for investment. Sri Lanka’s debt default may not be a coincidence in this context.

“Yet in some ways dollar strength seems counter-intuitive. The country is still running an annual budget deficit that is forecast to represent 6-8% of GDP in 2022 and a modest current account deficit on top of that, while it has an inflation problem after a decade of fiscal and monetary incontinence from the Government and the Fed alike.

“The key here may be that the most other Western powers’ finances look equally tatty, if not worse, so investors and holders of dollar assets may be more sanguine than perhaps they would be otherwise.

“The key question then is what could happen if that perception and dollar-holders were to lose faith in the US currency. If the Fed were to start slashing rates and turn to Quantitative Easing again, in response to a recession, and take its chances with inflation that could knock faith in the buck. Although again other central banks would probably be doing the same at the same time, that could knock faith in dollars, or at least fiat currency more generally. That might play to commodities in particular, if ‘real stuff’ comes to be take on haven qualities relative to ‘paper’ assets and be the start of another upward leg in raw material prices.”