The Bank of England may be moving more slowly than the US Federal Reserve when it comes to raising interest rates, but the UK’s central bank is still expected to raise the cost of borrowing for the fifth time when it meets on Thursday,

There have been eleven previous upcycles for UK interest rates since the inception of the FTSE All-Share index in 1962. There can be little doubt that UK equities do better when rates are falling rather than rising, even if the range of performance across those prior instances is wide.

At its last meeting in May the Bank of England pushed through its fourth rate rise of this cycle, a quarter-point increase to 1.00%, and announced that Quantitative Easing stood at £867 billion, down from its peak of £895 billion. Markets are pricing in 25 basis-point increases in June, August, September, November and December to get us to 2.25%. 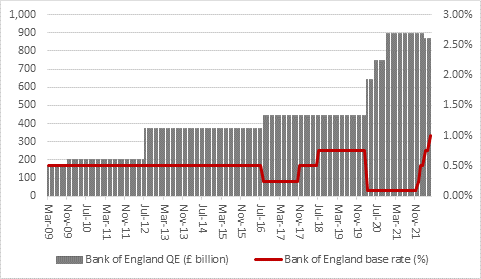 Markets are factoring in a surge in US headline borrowing costs, as benchmarked by the Fed Funds rate, to at least 3% by Christmas, so the Old Lady of Threadneedle Street appears to be moving at a more measured pace, even if both monetary authorities are facing the same dilemma.

On one hand, there is a risk that interest rate increases slow the economy down too quickly, or even tip it into recession, as higher interest payments on government, corporate and consumer debts weigh on their ability to spend.

On the other, the Bank faces the risk of doing too little to rein in inflation, with the result that increases in the cost of living and higher input costs compress disposable income and corporate profit margins, again knocking both confidence and spending among households and businesses. We are already seeing this reflected in plunging consumer confidence and weak retail sales and there must be a chance that corporate profit margins start to come under pressure if input price inflation (the increase in companies’ bills) continues to run ahead of consumer price inflation (the increase in the prices they can charge).

Investors must also ponder the implications of this dilemma when it comes to the UK stock market.

Although it does seem that the stock market has historically been able to take the strain of higher borrowing costs providing underlying economic growth and corporate profits growth were robust.

The period in the 70s could provide an uncanny echo of what is happening now, according to some, and if that is the case then investors have some difficult times ahead. Anyone who put money into the UK equity market in 1966 didn’t get it back in real, inflation-adjusted terms, until the early 1980s, even though the FTSE All-Share index bottomed in nominal terms in January 1975 (at just 62).

Investors will be pleased to see the resilience of the FTSE All-Share across most rate-hike cycles. However, they may be less thrilled to see what happens once the Bank of England stops hiking.

The most recent results are not pretty, illustrating the risk the UK’s central bank keeps increasing interest rates until something breaks – either the economy, the stock market or both – because the increased debt in the system means everything is more sensitive to even relatively minor changes in borrowing costs. Only once the damage is done will the Bank then put down its blunt instruments of monetary policy, namely interest rates and QE (or QT).