When Jack Nicholson was playing The Joker in Tim Burton’s first Batman film in 1989, he was so well paid that he reportedly told a fellow cast member after just a week’s shooting, ‘Ah well, that’s another Matisse.’ Financial markets are starting to rack up some big numbers, too, but in this case the money is flowing out, not in.

After Thursday’s sell-off, the much-lauded sextet of Meta Platforms, Amazon, Apple, Netflix, Alphabet and Microsoft have lost a combined $2.5 trillion in market cap from their aggregate peak in December and – as the Fed and other central banks focus on taming inflation rather than supporting financial markets by raising interest rates and withdrawing Quantitative Tightening – there could be worse to come, if investors’ experiences of the NASDAQ bear market of 2000 to 2002 are any guide. 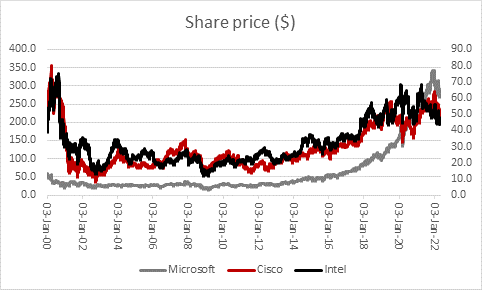 Back in 2000, the three biggest technology stocks by market capitalisation were Microsoft, Cisco and Intel. When the NASDAQ peaked at 5,049 on 10 March 2000 these stock market darlings, seemingly invincible at the time, given their strong competitive positions, booming earnings and robust balance sheets, commanded a combined valuation of $1.4 trillion.

That felt like a lot of money at that time.

Investors may smile, safe in the knowledge that Microsoft alone still has a stock market price tag of $2.1 trillion on its own today.

But of the 2000 peak’s three tech titans, Microsoft is the only one whose shares trade higher now than they did then. Cisco and Intel still trade some 38% below their 2000 highs. And anyone who toughed it out with Microsoft had to be supremely patient. Anyone unlucky enough to have paid the top-tick of $55.90 had to wait until December 2015 before they got their money back. 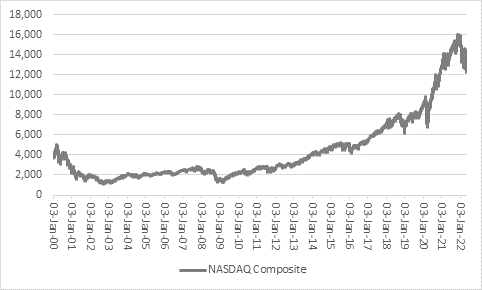 Worse still, there were multiple rallies in those big names, which only served to lure investors into further trouble. A quick look at how the market caps of Microsoft, Cisco and Intel changed from the start of 2000 to the end of 2002, when a recovery was firmly in place, reveals at least half a dozen major rallies, either as investors bought on the dips or hedge funds closed out their shorts, or both. But the net result was just more portfolio pain – and that was at a time when the Federal Reserve was frantically slashing rates, not raising them. 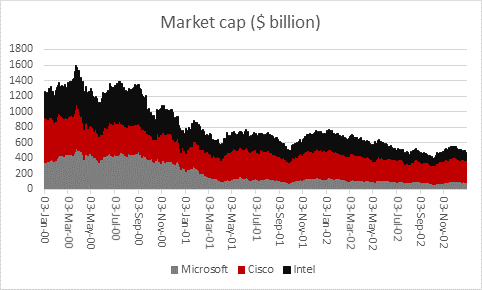 Thankfully the past is no guarantee for future. But the way in which Wednesday’s rally quickly gave way to a fresh rout on Thursday may not have been a good sign, as relief that the Fed raised interest rates by just 0.50%, and not 0.75%, and that QT would only start very gently in June, swiftly dissipated.

The Meta, Amazon, Apple, Netflix, Alphabet and Microsoft sextet now carries a valuation of less than $8 trillion for the first time since March 2021. And if you just take the combined value of the three biggest – Apple, Microsoft and Alphabet - even they have lost 18%, or $1.5 trillion, since December.

A comparison of the combined market caps of Microsoft, Cisco and Intel from 3 January 2000 onwards and the aggregate valuation of Apple, Microsoft and Alphabet from 3 January 2022 onwards could be an interesting test of sentiment going forwards. 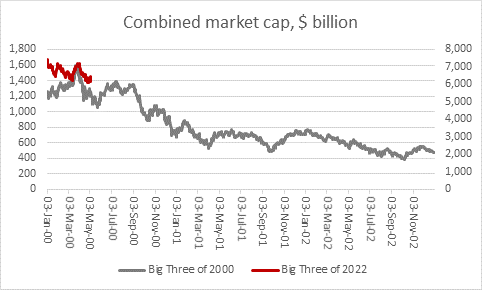