Five questions that Amazon must answer in its first-quarter results Amazon’s fourth-quarter results for 2021 were weak, guidance for the first-quarter of 2022 was poor and the gambit of a stock split coupled with a $10 billion share buyback has subsequently failed to support the shares.

They are down by more than a fifth from their all-time high of last July, to technically leave them in a bear market, and in Thursday’s first-quarter results for 2022 Amazon must address the five issues which marked the fourth-quarter of 2021 down as a stinker. 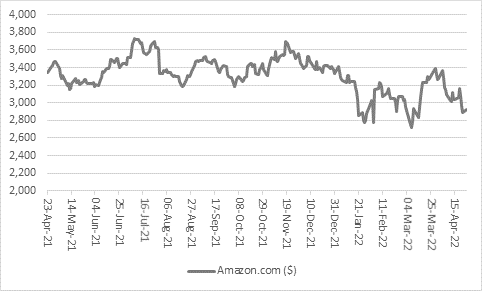 Amazon’s shares actually popped higher after the Q4 figures, which beat analysts’ forecasts and featured the announcement of a 17% price hike for Amazon prime users in the USA.

But management had set a low bar for expectations with a conservative outlook alongside the third-quarter results and the figures were propped up by a capital gain on the company’s shares in Rivian Automotive after its stock market flotation. Electric vehicle maker Rivian’s shares have since blown a fuse, so that gain will not be repeated this time around.

That’s not really good enough for a cult stock with a market capitalisation of $1.5 trillion that represents more than 60 times forecast profits for 2022. Analysts have not moved to cut their estimates, presumably in the view that management sandbagged its guidance for the first quarter and have actually upgraded them in the past two months. 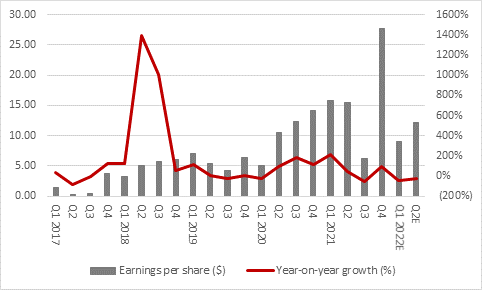 For the whole of 2022, analysts are looking for $49.14, down from 2021’s bumper $64.81, although if attained that would still be the second-best year in the company’s history. The consensus for 2023 is a fresh surge to a new record-high EPS figure of $76.61, so a strong Q1 is needed to give confidence that Amazon can quickly get onto that expected growth trajectory. 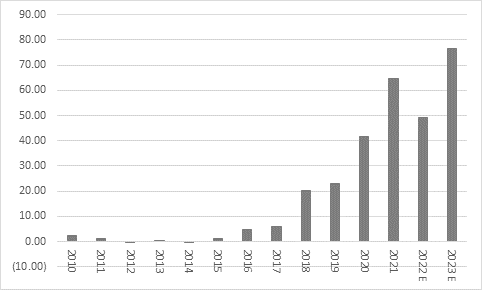 And to give that confidence, Amazon needs to address five issues from the Q4 report which raised so many questions.

1. Sales growth slowed to 9.4% year-on-year in Q4 and the mid-point of management’s guidance for Q1 revenues coming in between $112 billion and $117 billion implied a 5.5% year-on-year advance. That would be a massive deceleration from the rates to which investors have been accustomed, although analysts have parked their Q1 forecast at the top end of the guided range at $117 billion (with $126 billion pencilled in for Q2). 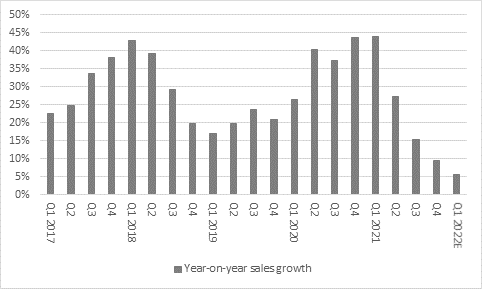 2. Online stores sales fell year-on-year in the fourth quarter, with a decline of 0.6%. This is the main reason for the overall sales slowdown. Maybe shoppers were looking to get out and about a bit more, maybe they were using other websites and stores to ensure local favourites were not crushed by a multi-national behemoth or maybe the law of large numbers is taking over. But a $1.5 trillion market cap is implicitly demanding a lot more than that from what is still the Amazon’s biggest revenue stream on a divisional basis. 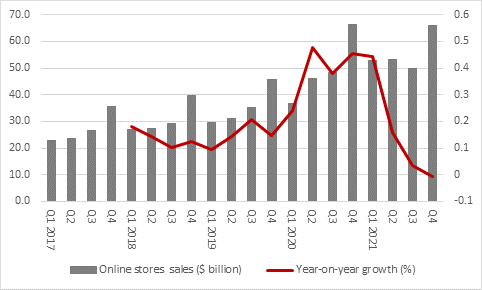 3. Operating profit halved in the fourth quarter of 2021 as the rate of sales growth slowed and cost pressures told, in the form of wages, fuel, shipping and supply chain disruption. That was the second straight year-on-year drop in operating profit and Amazon’s operating return on sales retreated to 2.5%, its lowest level since Q3 2017. 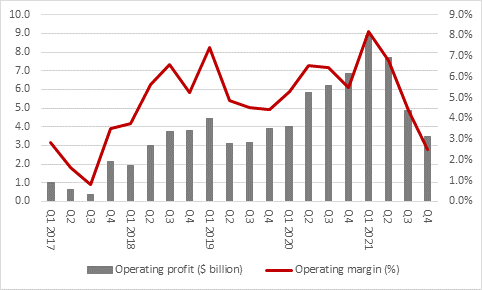 4. North America went into loss in the fourth quarter and International was in the red for the whole year. North America had not made a quarterly loss since Amazon first published operating profit by division back in 2015. International made a maiden annual profit in 2020 but slipped back into loss in 2021. Again, this shows the cost pressures which face the online delivery businesses and flags the importance to Amazon of its cloud computing operation AWS, which generated three-quarters of group operating profit in 2021 overall and all of it and more in the final three months of the year. That high-quality business is the core of Amazon and in many ways the foundations upon which it rests. 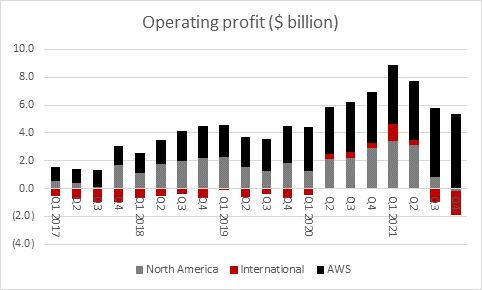 5. Profits guidance for the first quarter implied a further big drop and even though it was flattered by an accounting change. Management steered first quarter operating profit forecasts to between $3 billion and $6 billion. The $4.5 billion mid-point of that range compares to $8.9 billion and implies a third straight year-on-year drop. Moreover, that forecast assumes a $1 billion drop in depreciation expense as Amazon now believes its servers and networking equipment will last longer than previously assumed. Even on a sales base north of $100 billion a quarter a $1 billion drop in depreciation charges equates to around one percentage of operating margin, a significant number when management forecasts imply around a 4% operating margin for Q1 2022. Such accounting sleight of hand is not an ideal way of ensuring profit forecasts are met and the lofty valuation really requires a higher-quality source of earnings than that, if it is to be sustained. 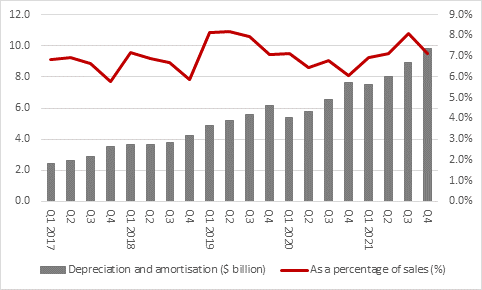 Amazon suffered three straight year-on-year drops in operating profit in Q1 2017 to Q3 2017 and it then came roaring back, so the company has suffered profit stumbles before.

Nor should investors underestimate the power of the AWS business or the potential of the Prime price hikes to support profits. In many ways that has been the bull case for Amazon – it will win customers and take share, demolish the opposition and then jack up prices when it has a dominant market position, turning itself into a wildly profitable cash machine.

But after big earnings disappointments from Meta Platforms and Netflix, the pressure is on Amazon to reassure investors as stock markets more widely assess the possible impact of rising prices and rising interest rates on corporate earnings and valuations.