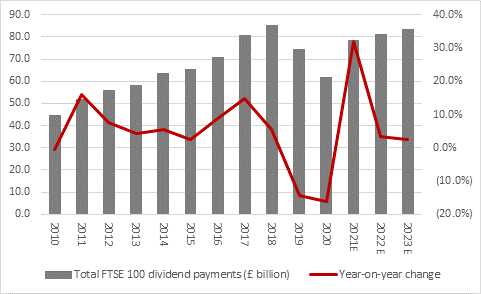 The combination of £81.2 billion in forecast dividends and the already-announced £32.7 billion in buybacks means that 2022 could be the second best-year ever for cash returns from the FTSE 100 – and there are still nine months left for more buybacks and special dividends (of which there were £5.8 billion in 2021). 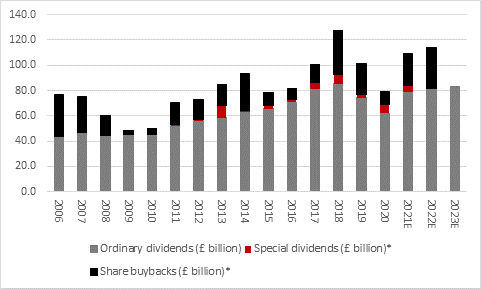 It appears that companies may be leaning more toward share buybacks when it comes to returning cash to shareholders. This could be down to a desire to preserve dividend cover at newly rebuilt levels, the UK Government’s one-and-a-quarter percentage point increase in dividend taxes, or the pensions’ regulator’s threat to challenge dividend payments made by firms with pension deficits, or a mixture of all three.

Halting a buyback is a lot easier, and less likely to attract criticism, than cutting a dividend. That said, buybacks are hardly a sign of limited corporate confidence, especially as FTSE 100 firms have already announced £32.7 billion of buybacks in the first three months of 2022, a figure which already exceeds the total for 2021.

It also takes the forecast total cash return from the index to 5.4% of its current market cap, once dividends and buybacks are added together. There could also potentially be some scope for more special dividends, after the £5.8 billion returned to shareholders in this way in 2021.

Meaty increases in dividends at Glencore, Shell, HSBC, Lloyds and the resumption of payments at Flutter Entertainment look set to just do enough to offset anticipated falls at GlaxoSmithKline (thanks to a change in corporate structure) and Antofagasta, as well as the demotion of that trio of miners, BHP, Evraz and Polymetal.

This highlights the importance of the miners to the overall direction of FTSE 100 profits and dividends. Miners’ contribution to the total is expected to drop in 2022 after the demotion from the index of not just BHP but Evraz and Polymetal too, and then again in 2023.

A £10.1 billion increase in dividends from miners in 2021, excluding special payments, is expected to give way to a drop of £1.8 billion in 2022 and another decline of £3.4 billion in 2023, despite the promotion of gold digger Endeavour Mining to the UK’s premier index in March.

Presumably analysts do not believe that the current bout of price strength in iron ore, nickel, aluminium, copper and others will last, in the view that high prices will choke off demand and stoke supply. Equally, the consensus may be concluding that the recent metal price spikes are more due to the war in Ukraine and the threat of sanctions against Russian supply. 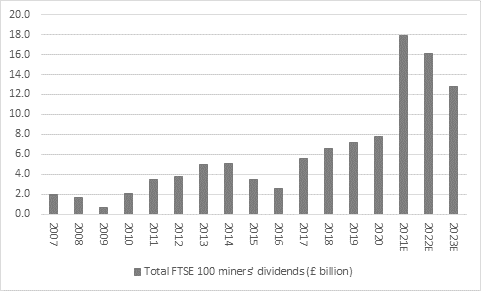 One other reason why dividend growth may be slowing is that dividend cover is improving and executives may be keen to preserve this buffer.

Companies may be choosing to let earnings growth outpace dividend growth so they can reinvest in their businesses, bolster balance sheets and rebuild cover, so that their shareholder distributions are not quite the hostage to fortune that they proved to be in 2020, should another unexpected shock emerge from left field.

The aggregate earnings cover ratio for the FTSE 100 is now seen rising to 2.09 times in 2022, according to analysts’ consensus and dividend forecasts. 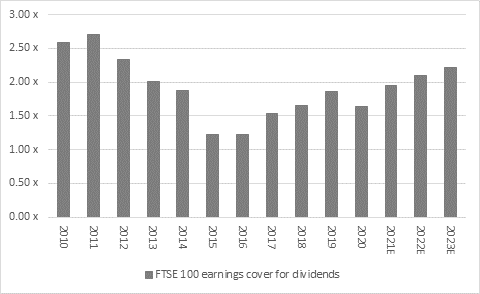 Analysts currently believe that 2022’s stated net profits of £169.7 billion will exceed not only the pre-pandemic peaks of 2017 but the high of 2013 as well, when Vodafone’s sale of its stake in an American joint venture with Verizon added considerably to the total.

On an adjusted basis, net income in 2022 is expected to exceed not only the pre-pandemic peak of 2018 but the all-time high of 2011, when commodity prices were roaring, and miners and oils generated 42% of the total between them. 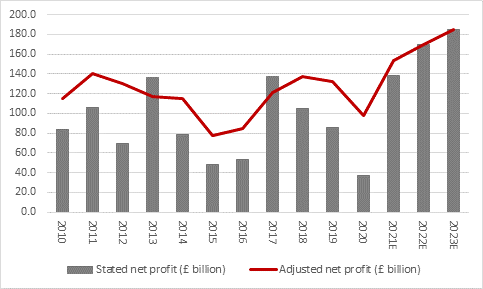 Oils and consumer stocks, with a little help from industrials, are expected to drive the forecast 7%, or £15.0 billion increase in aggregate FTSE 100 pre-tax profit for 2022, as miners and financials both see lower earnings. The forecast drop at miners reflects higher costs, the assumption that lofty industrial metal prices may not last and also the demotion of Evraz, Polymetal and BHP. The banks’ profits in 2021 are likely to have been flattered by write-backs relating to the bad loan provisions they took in 2020.

Rio Tinto set to be the highest dividend paying stock

This may have ESG-oriented investors gnashing their teeth, especially as they may argue both firms are acting too slowly in their attempts to shift their business mix to more renewable sources of energy. Shell and fellow oil major BP, also a top-ten dividend contributor, have a tricky balancing act as they look to get the best out of their existing assets, reinvest for the future (without overpaying here, amid the mad scramble for ‘green’ assets) and keeping shareholders sweet with cash returns.

That said, Shell is starting to increase its dividend on a quarterly basis and both it and BP are also returning cash to investors via share buybacks.

At the time of writing, Persimmon is the highest-yielding individual stock, closely followed by Rio Tinto and then Imperial Brands.

Forecast yields of more than 10% may make investors a little wary, given the shocking record of firms previously expected to generate such bumper returns, including Vodafone, Shell, Evraz itself and – when they were still in the FTSE 100 - Royal Mail, Marks & Spencer and Centrica. All were forecasts to generate a yield in excess of 10% at one stage or another and all cut the dividend instead.

View our Dividend dashboard for Q1