Cash savers pulled more than £7bn from bank and building society ISAs in the last six months of 2021 – marking the biggest outflows from ISAs since they were launched in 1999. Poor interest rates, the cost of living crunch and the dwindling appeal of cash ISAs have all played into these outflows.

ISAs generally see outflows in the second half of the year, with the first half typically seeing inflows as people put money in the accounts in March and April before the tax year-end deadline. For the past six years the final six months of the year have seen outflows from ISAs, but none as large as we saw in 2021.

The outflows of £7bn are 46% higher than the outflows seen in the final six months of 2020, which stood at £4.8bn and were the highest outflows on record at the time. Cash ISAs hit peak popularity in 2014, when the ISA limit was dramatically increased to £15,000 partway through the tax year, and flows in the final six months of that year stood at £15.6bn. However, their appeal has dwindled since then. What’s more, while the first half of 2021 saw inflows to cash ISAs, they were the lowest on record, with just £2.5bn going into the accounts in those six months.

During the final six months of last year, people put £35.5bn in non-ISA cash accounts, showing that there was still appetite to save, but not in ISAs. Dwindling interest rates are likely to be partly to blame, as 2021 saw interest rates fall to new record lows. The average Cash ISA was paying 0.3% interest at the end of last year, based on Bank of England data. Cash ISA rates more than halved last year, as the average rate on offer in 2021 was 0.38%, compared to 0.83% in 2020 and a comparatively impressive 1.4% in 2019.

The introduction of the Personal Savings Allowance in 2016 severely dented the popularity of cash ISAs, as it meant the majority of savers in the UK no longer paid tax on their savings. The allowance means that basic-rate taxpayers can earn £1,000 in savings interest before they have to pay tax, while higher rate payer can earn £500 before tax is due. This allowance combined with historically low interest rates means that most people can amass significant cash savings before they have to pay any tax. If their savings were earning interest of 0.5% a basic-rate taxpayer could have £200,000 in savings and still be covered by the allowance, while a higher rate payer could have £100,000 before tax was due.

The ISA allowance has increased dramatically in recent years, rising to the current £20,000 in April 2017 after jumping to £15,000 in 2014. Before that the allowance hovered around the £5,000 to £6,000 mark, meaning there was much more impetus for people to fill their cash ISA before the end of the tax year rather than risk losing it. Now, the £20,000 allowance is far more than most individuals would be able to put away in any one tax year, meaning there is less need to contribute to their ISA before the deadline. Without the pressure of a deadline it means many people simply forget to add to their ISA – which is reflected in the amount of cash that’s left dwindling in current accounts.

However, additional-rate taxpayers get no personal savings allowance, so they should consider using an ISA. The same is true for those who think that they might tip over into the additional-rate threshold, either through a payrise or from a bonus. For these savers, an ISA could save them a significant amount on their tax bill, as any savings interest will be taxed at their marginal rate of 45%. For example, an additional rate taxpayer who has £50,000 in savings outside their ISA earning 0.5% will generate £250 of interest, which will then be reduced to £137.50 after tax.

There’s no doubt that the cost of living crunch has hit savings across the board, including the amount people are stashing in cash ISAs. While people still put money in non-ISA accounts in the last six months of 2021, they collectively saved less than half the amount they put away the previous year, when almost £73bn was saved. The combination of rising prices across the board and wages failing to rise by as much means that many households will have no spare money each month, or will be dipping into savings in order to meet their monthly costs. Wealthier households who are more comfortably off may also be using their spare cash to splurge after two years of the pandemic, booking a pricier holiday or treating their family after so long in various lockdowns.

If cash savings rates rose to 1.25% then a basic-rate taxpayer would hit their Personal Savings Allowance once they had £80,000 of cash savings, while a higher-rate payer would hit the limit at £40,000 of savings. Savers also need to consider how long it would take them to transfer their non-ISA savings into an ISA too, as if it would take multiple tax years they may want to start now as a precaution against either increasing interest rates or their salary pushing them into the next tax bracket.

People should also consider that you can transfer a Cash ISA into a Stocks and Shares ISA at any point so whilst the tax free status might not look that valuable on cash savings, if you save money within an ISA you have the option of investing it in the stock market in later years and the tax benefits then become very valuable. 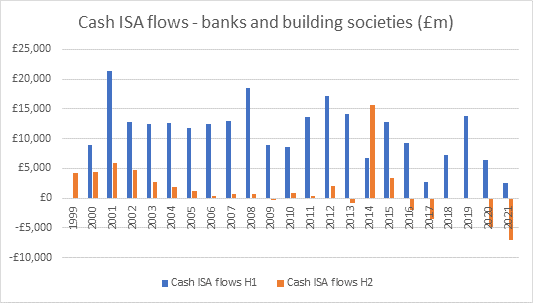 Source: Moneyfacts.co.uk. Based on easy-access accounts with £10,000 savings.