The Cash ISA paradox – rates are rising, but things are getting tougher for savers Cash savings have suffered death by a thousand rate cuts over the last decade, but the cash paradox is that even though rates are now on the up, things look like they will get even tougher for savers. That’s because elevated inflation is going to eat up any gains from higher interest rates on cash and will take an extra pound of flesh for its trouble too.

£10,000 invested ten years ago would now be worth just £9,385 today, after inflation is taken into account. This lost decade for cash savers has of course been caused by ultra-loose monetary policy, though inflation has remained largely contained. What is alarming is that in the next twelve months alone, Cash ISA savers face a similar loss in buying power to the one they have experienced over the last decade. £10,000 saved into the average Cash ISA today could be worth just £9,600 this time next year, based on the latest Bank of England forecasts for interest rates and inflation, and the current margin between base rate and ISA rates.

So despite interest rates falling to rock bottom over the last ten years, worse may yet be in store for cash savers. Longer term, higher rates should be positive for Cash ISA savers, if inflation tails off in the way the Bank of England expects. If it doesn’t, the last ten years of slow and steady inflationary erosion could end up looking like a walk in the park.

Those who shop around will likely be able to improve their lot, slightly. The current best buy ISA is offering 0.6% per annum, according to Moneyfacts, which compares to 0.34% for the average Cash ISA. As interest rates rise, the wedge between the most competitive and least competitive Cash ISAs can be expected to grow, as some banks attempt to attract new customers by bumping up their rate, while others try too eek out some extra profits by keeping rates low until savers start voting with their feet.

Meanwhile Stocks and Shares ISA investors have been big winners from the last ten years. £10,000 invested in the average global stock market fund within an ISA would now be worth £26,402 after inflation is taken into account. Over any ten year period, the odds are heavily stacked in favour of a stock investor compared to a cash saver. But the loose monetary policy of the last decade has helped exacerbate that trend. Looking forward, tightening monetary policy may well prove to be a false friend to cash savers, if accompanied by sustained inflationary pressures. High inflation isn’t exactly good news for shares either, but companies can at least offset increasing costs by pushing price rises onto consumers. Investing in shares therefore looks like the best way to beat inflation over the long term.

The FCA’s latest strategic focus on encouraging those with high levels of cash saving to invest for the longer term is therefore well-timed. The regulator reckons that 8.6 million consumers hold over £10,000 of investible assets as cash. HMRC data shows that £443 billion was put into Cash ISAs between 2010 and 2020, compared with £206 billion invested into Stocks and Shares ISAs over the same period. Clearly low interest rates have not hugely deterred Cash ISA savers to date, but the return of high inflation means poor cash rates will really start to bite, and will likely push savers up the risk spectrum in search of inflation-busting returns. Those who are thinking of taking on more risk by investing in the stock market might consider doing so through a monthly savings plan, which will make for a smoother ride.

The lost decade for cash in numbers

Since January 2012, the average interest rate paid on Cash ISA balances has sunk from 2.5% to a record low of 0.3%. A combination of low interest rates and bank funding schemes like Funding for Lending and the Term Funding Scheme have seen cash rates drop to almost zero. Inflation has been relatively benign over this period, averaging 2%, directly in line with the Bank of England’s target. Even so, £10,000 invested in a Cash ISA ten years ago would be worth £9,385 in real terms today. 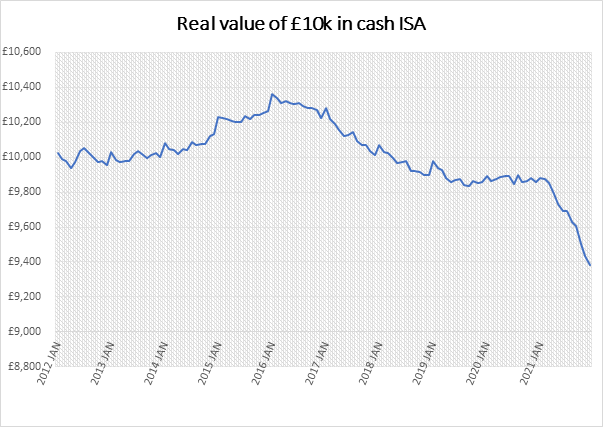 By contrast the average Global Stocks and Shares ISA (invested in the IA Global fund sector average) has turned £10,000 invested into £26,402 over the same period, after adjusting for inflation. If you had saved your full Cash ISA allowance over these ten years, equivalent to £142,220 of contributions, that would now be worth £132,663 in real terms, if saved in the average Cash ISA. If invested in the average Global Stocks and Shares ISA instead, it would be now worth £228,564, after adjusting for inflation.

Looking forward, the market is expecting rates to rise, and the Bank of England is forecasting that inflation will fall away next year. The latest forecast from the Bank is shown in the table below. The rate of interest paid on the average Cash ISA currently stands 0.09% above the Bank of England base rate, so assuming that margin holds, and the Bank’s forecasts are accurate, that would mean £10,000 saved in the average Cash ISA today would be worth around £9,600 this time next year*. Beyond that, the Bank expects inflation to moderate, but interest rate hikes are expected to tail off too. Of course, the Bank has repeatedly underestimated inflationary pressures of late, and if elevated inflation sticks around for longer, that could be even more ruinous for cash savings.

*Estimate is based on an average Cash ISA rate of 1% over the next 12 months; the latest data available from the Bank of England shows the average Cash ISA paid 0.34% in interest over 2021, when base rate was 0.25%.

Source: Bank of England, the path for Bank rate implied by forward market interest rates and CPI projections based on Bank rate following that path.

Losing interest in your savings?

Get investing in our low-cost Stocks and shares ISA

Important information: These articles are for information purposes only and are not a personal recommendation or advice. How you're taxed will depend on your circumstances, and tax rules can change. ISA rules apply.