“It is very early in 2022 but there is an old saying that ‘As goes January, so goes the year.’ So far, the FTSE 350 is up by less than 2% and only 15 of its 40 individual industry subsectors are showing any gains. However, the identity of those 15 sectors is telling and suggest that the UK stock market may not be a bad place to be if inflation stays entrenched and confounds any efforts by central banks to rein it in,” says AJ Bell Investment Director Russ Mould.

“This is because the leading gainers operate in industries where demand is fairly price inelastic, such as energy and tobacco; where higher interest rates and steeper yield curves may help profit margins and earnings, at least up to a point, such as banks and insurers; or that own real assets where supply is expensive to build and where that supply is growing more slowly relative to money supply, such as miners.

Source: Sharepad. *To the close on Friday 14 January

“The FTSE 100 is home to many of these heavyweight sectors and even if the headline index is up just 2% in 2022, it stands some 10% higher than a year. Moreover, the good news is that earnings momentum remains positive for the FTSE 100 as analysts continue to increase their profit estimates for 2022 and 2023. 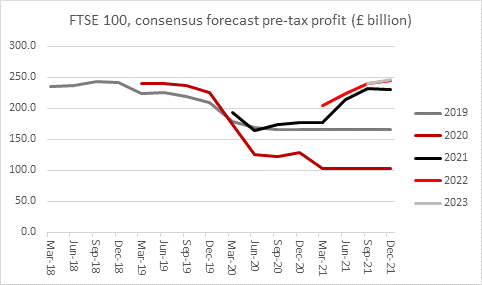 “The less good news is that aggregate profits growth for the index is expected to slow to a virtual crawl following 2021’s rebound. Not all of the numbers are in yet, but total pre-tax profits for the FTSE 100 are expected to have doubled in 2021. While it is unrealistic to expect such a torrid pace to continue, advisers and clients could be forgiven for looking askance at estimates which look for 6% profits growth in 2022 and just 1% in 2023. 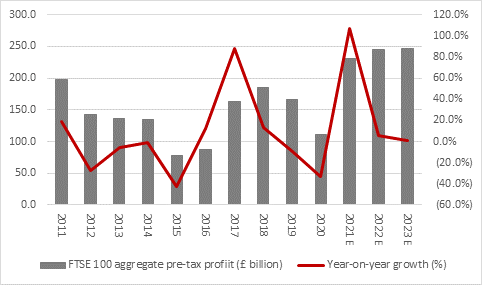 “The reason for this sudden go-slow lies largely with the FTSE 100’s mix of constituents. Without wishing to be too pejorative about it, the index is largely made up of the unpredictable (oils and miners), the indigestible (banks and insurers) and the downright stodgy (utilities, telecoms and to a lesser degree pharmaceuticals). A racy mix it is not, at least in the low-growth, low-inflation, low-interest-rate environment that has dominated for the past decade or more. Miners, financials and oils have not been great investments and the FTSE 100 is packed with them.

“In this environment, the FTSE 100 could come into its own. It has underperformed in the world stage since the Brexit vote (if not before). Underperformance can mean unloved and unloved can mean undervalued, at least from a contrarian’s perspective. And undervalued is always a potentially interesting starting point, with the FTSE 100 looking decent value relative to its own history on around 13 times earnings for 2022.

Granted, its unusual, or at least distinctly twentieth-century, earnings mix (lacking in technology, abundant in commodities) may mean the FTSE 100 deserves a low rating relative to international peers such as the USA, which is packed with tech, biotech, social media and online winners and an equally large range of potential future disruptors. 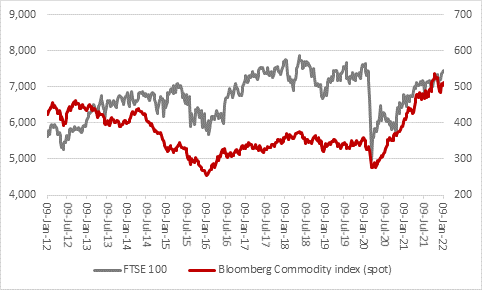 “But if inflation runs hot and stays hot, then ‘real’ assets such as commodities, or paper claims on them via shares in mining and oil producing shares, may not be such a bad place to be. Nor may banks, which would welcome, at least to some degree, higher interest rates and steeper yield curve, as they will help to fatten out net interest margins and thus profits (so long as higher borrowing costs do not weigh too heavily on customers’ ability to meet interest payments and return principal). The FTSE 350 Banks index is up by nearly 15% this year already and can point to an advance of 35% over the past 12 months, so the market is starting to look upon the banks more favourably than it has for a while. 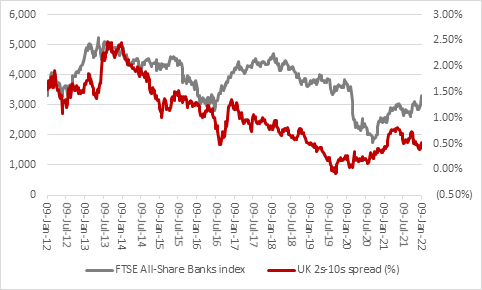 “An index that gets 62% of its forecast profits and 51% of its forecast dividends from miners, financials and oils may therefore sound a bit unpredictable, indigestible or downright stodgy.

“But if inflation takes a hold then the FTSE 100 might start to look more tempting, although there is a danger that the index gets too much of what may be a good thing. A sustained inflation overshoot would not be helpful, if the limited number of historic precedents available is any guide.

“An initial surge in inflation after the crack-up ‘Barber boom’ of the early 1970s was followed by an oil price spike, an economic downturn and a crushing bear market which left UK equities stocks trading on an average of barely five times forward earnings (and there were no fewer than four waves of inflation that swept over the nation in the 1970s). The UK now trades on an earnings multiple in the low teens. That is not high by historic standards but it is a long way about the mid-1970s valuation trough. 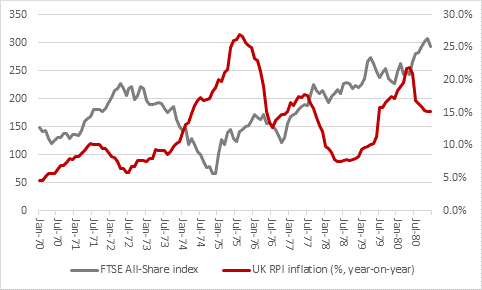 “Equally, if even modest interest rates slow the global recovery right down, or even tip it over into a recession, or a new viral variant does that job, then the UK’s heavyweight index could yet struggle to move past that May 2018 peak and continue to lag its global peers, many of whom already trade at or near new all-time highs, including America, France, Germany and India.”