“The fourth-quarter reporting season kicks off in earnest on Friday when the megabanks JP Morgan Chase, Citigroup and Wells Fargo all release their earnings and these figures could set the tone for both the FTSE 100 banks (who report in February) and stock markets more widely,” says AJ Bell Investment Director Russ Mould.

“The Big Four US banks are expected to report record earnings for 2021 but analysts then expect a dip in 2022, as a good portion of last year’s forecast uplift came from writing back bad loan provisions taken in 2020 rather than growth in loan books or higher net interest margins.

“The market is certainly looking for better things. The Philadelphia KBW Banks index in the USA is already up 10% this year (and is up by 37% over the past 12 months) while the FTSE All-Share Banks index can point to an 8% gain 2021 (and a 25% advance over the past year). 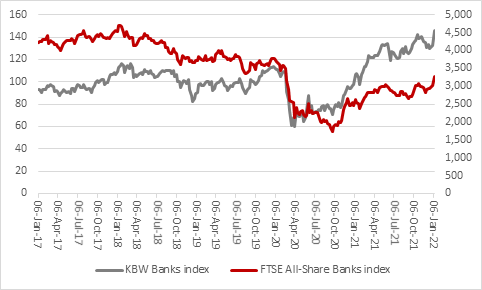 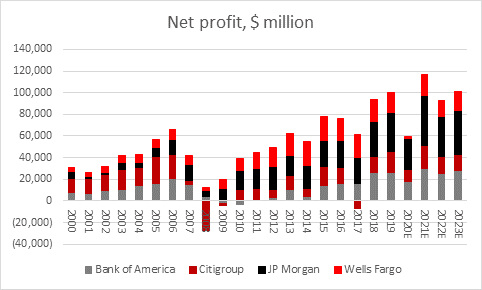 “This is in marked contrast to the Big Five in the FTSE 100 who, according to analysts’ forecasts – might just have scraped past their 2007 peak profit of £35.8 billion in 2021, when they are estimated to have racked pre-tax earnings of £36.4 billion.

“We will learn more when they release fourth-quarter and full-year results next month. Standard Chartered is first up on 17th February, followed by NatWest on the 18th, Barclays and HSBC on the 23rd and finally Lloyds on the 24th. 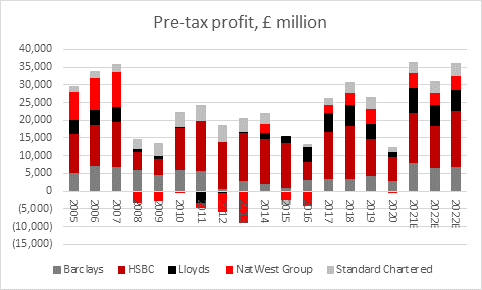 “There may be several key reasons for the difference in earnings power, but the US banks may have been more aggressive in their loan provisioning and cleaning up the mess of 2007-09. In addition, the US Federal Reserve pays interest on banks reserves’; three of the US Big Four have powerful investment banks which can feast upon booming equity and bond markets and ride the wave of IPOs, SPAC deals and merger and acquisition activity; and the US economy has simply been more dynamic than that of the UK or many of the emerging markets addressed by HSBC and Standard Chartered.

“Whatever the reasons, both the Big Four in the US and the Big Five are expected to show a dip in profits in 2022, as this year is not expected to benefit from the write-back of bad loan provisions taken in 2020. Not as many loans went sour as expected in 2021, helped by vaccinations, an end to lockdowns and an economic upturn.

“The Big Four have already written back $19 billion in loan loss provisions in the first three quarters of 2021, against the $60 billion in charges they took in 2020. The pace slowed in the third quarter to $3.7 billion of write-backs, from $6.2 billion in the second and $9.7 billion in the first, and it will be interesting to see if it did so again in the fourth. 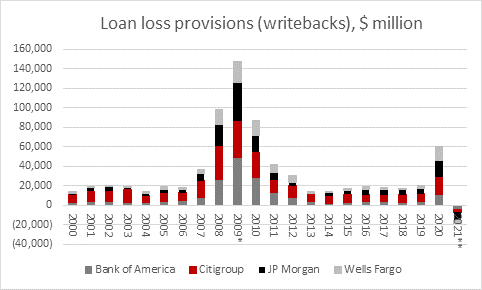 “Analysts and shareholders will look to other key drivers of profit beyond loan loss provisions or writebacks) and the investment banks (with the exception of Wells Fargo).

“Loan growth remains anaemic and is still being outstripped by deposit growth. This may signal caution on behalf of consumers and corporations, in light of the latest viral variant, but also the benefit of Government support schemes which are now ending or have ended. An acceleration in loan growth would speak of increased confidence in the US economy and give support to earnings forecasts. 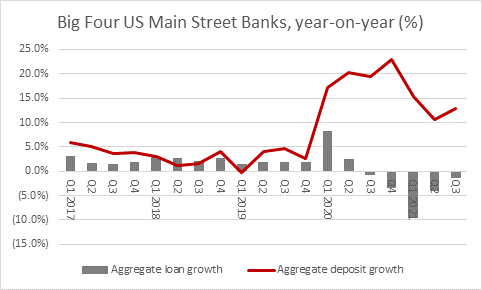 “Analysts and investors will also look to the net interest margins of the US Big Four (with a possible readthrough to the Big Five in the UK). A decade of zero interest rate policies and Quantitative Easing has done these no end of harm, on both sides of the Atlantic. Markets now expect three interest rate rises from the Fed in 2021, and the central bank is even discussing Quantitative Tightening. Higher rates and a steeper yield curve could boost net interest margins and earnings power – providing higher borrowing costs and interest bills do not tip borrowers (or the economy) over the edge. 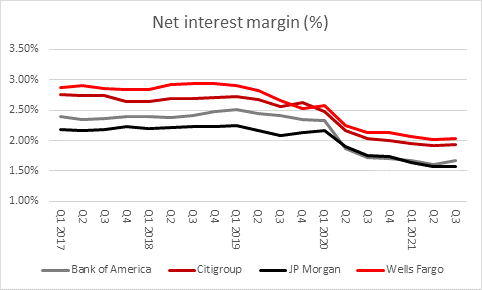 “The final point of attention for the US megabanks will be dividends and share buybacks. Wells Fargo has cut its overall dividend in 2021, thanks as much to regulatory woes and economic and loan-book related ones, but the other three have not (and even Wells Fargo managed an increase to $0.20 a share from $0.10 in the third quarter). 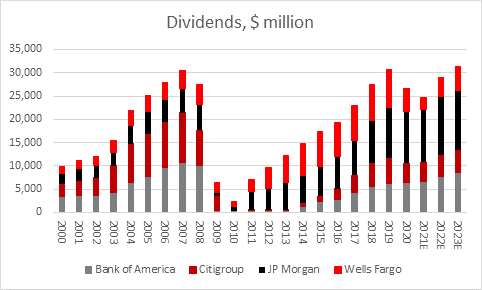 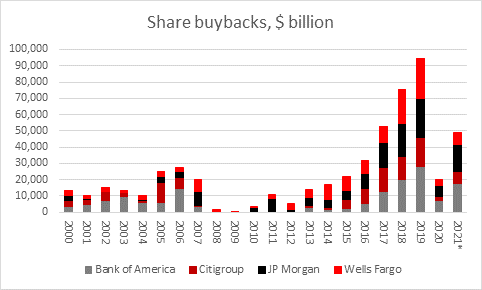 “This boosts the total cash yield on offer from the US banks, coupled with their lofty profitability and high returns on equity, may explain why three of the four of them trade at premiums to net asset value, unlike the FTSE 100 banks, all of which trade at a discount.”