The past 12 months have been a bit of a mixed bag from a portfolio point of view. The American, Indian, German and French stock markets all set new all-time highs in the fourth quarter, the FTSE 100 has provided a double-digit percentage capital gain (with dividends on top) and oil surprised with a near-40% gain – but Brazil and China are down for the year, gold has done nothing and some of the air has started to leak out of some of the more speculative areas of the market: Bitcoin has shed a quarter of its value and Cathie Wood’s ARK Innovations ETF has collapsed.

Five key trends helped to shape markets in 2021 and they could do so again in 2022, so they are worthy of further study, especially if investors are preparing to a New-Year review of their strategic asset allocation plans for portfolios.

The average capital gain from an Initial Public Offering (IPO) on the London Stock Exchange is some 20%, which looks perfectly healthy, especially for a sample of almost 100 deals. However, the range of returns is wide, from a trebling to a drop of more than three-quarters and only half generated a positive return: for every success like Oxford Nanopore there has been a flop like Deliveroo and even Darktrace has shed a lot of its early gains.

IPOs are important because a real boom in new offerings is often the sign of a market top – that certainly proved to be the case in the UK in 1999-2000 and 2006-07. It often works out that way because the quality of deals goes down as stock indices – and risk appetite – go up and misallocation of capital and subsequent losses bring down the curtain. As the old saying goes, ‘bull markets ends when the money runs out.’

The good news at least is that the flow of IPOs (and for that matter secondary capital raisings by firms that are already listed) is nowhere near the levels seen near past peaks in the FTSE 100.

According to the London Stock Exchange website, primary listings have totalled £14.7 billion and secondary offerings have soaked up a further £24.7 billion of portfolios’ cash. 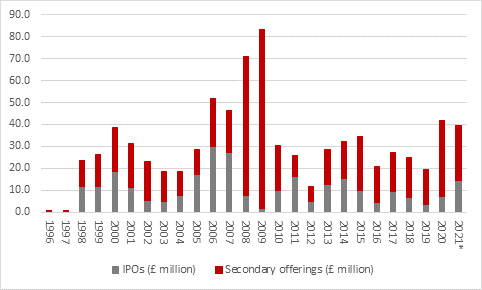 But ordinary dividends from the FTSE 100 alone will exceed £80 billion according to analysts’ estimates in 2021. Moreover, members of the UK’s leading index have already declared £5 billion in special dividends and nearly £19 billion of cash returns in the form of share buybacks. That lot comes to over £100 billion and then come the proceeds from the 70-odd bids for UK listed firms of all shapes and sizes.

The good news at least for advisers and clients with exposure to the UK equity market is that the money is not running out, to suggest the UK market has upside potential in 2022, providing the new offering pipeline is kept to sensible levels.

Oil’s near-40% gain to date in 2021 will have surprised many an investor, but uranium and even coal were strong markets too, despite the tide of public and political opinion, which has swung even further toward alternative and renewable sources of energy, especially after the COP26 summit.

Yet demand for energy continues to grow and renewables are not yet producing sufficient capacity to take the baseload strain. That means hydrocarbons are still important, whether we like or not, but supply is being constrained, partly by the machinations of OPEC and its allies, partly by geopolitics (and sanctions against Iran and Venezuela) and partly by oil firms themselves. Fund managers are pressuring them to invest in renewables or simply disinvesting, Governments are refusing to sanction fresh exploration and insurers are declining to insure new projects. 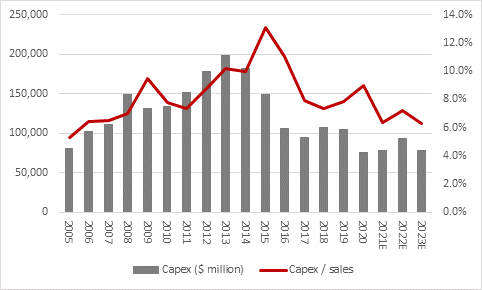 Not surprisingly spend on drilling is under pressure: the aggregate capex-to-sales ratio of the seven oil majors – BP, Chevron, ConocoPhillips, ExxonMobil, ENI, Shell and Total Energies – is heading toward multi-year lows. This could create a supply-demand squeeze if the economy shakes off the latest strain of covid-19 and keeps growing. And higher oil prices, if that’s what we get, could play a major role in shaping inflation, so watch this space in 2022.

Developed by economist Arthur Okun in the 1960s, this indicator simply adds together the prevailing rate of unemployment and the prevailing rate of inflation. As such, it defines the balancing act which central banks face when they set policy. For the past few years – and certainly since the pandemic – unemployment has been central banks’ number one preoccupation and they have run ultra-loose monetary policy as a result. But galloping inflation means the misery index is going higher, even if unemployment is coming down, and policymakers must now decide whether to accelerate their tapering of Quantitative Easing – or even to start withdrawing it - and raise interest rates at a faster rate than markets currently expect.

The Omicron variant complicates calculations, but the Misery Index would suggest that further action may be required (especially if oil prices catch light again) in 2022. 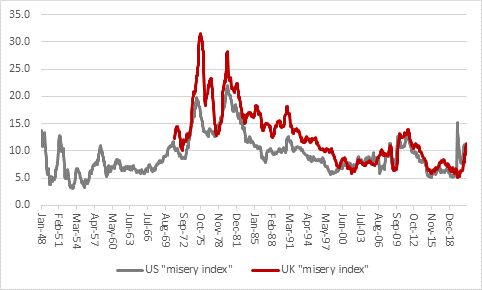 The past year has not been much fun for any investor who had a large allocation to Government bonds in the view that disinflation or even deflation would be the defining macroeconomic theme (in a continuation of the trend of the prior decade). 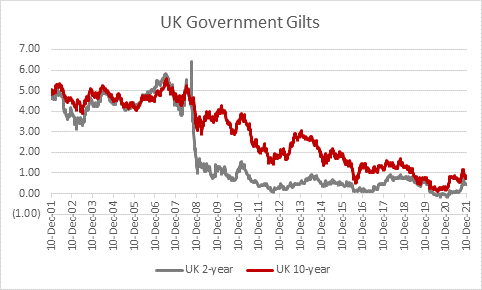 Using the UK as a benchmark, Gilt yields rose and prices fell, as inflation picked up pace and the Bank of England had to confront the prospect of whether to start tightening monetary policy.

The question now is whether a trend toward lower yields and higher prices, that dates back to the early 1980s and Volcker-led Federal Reserve in America and the Thatcher-Lawson axis in Government in the UK, is decisively broken or not. The chart does suggest a break-out but we have seen many false signals such as that in the last four decades.

Unfortunately, no discussion of financial markets can be complete without an assessment of central bank policy, as the above commentary makes only too clear. The monetary authorities have their fingers in more pies than Mr. Kipling: interest rates have been kept at historic lows since spring 2020 and Quantitative Easing, asset-buying programmes designed to suppress interest rates, force cash into financial markets and create a so-called wealth effect mean that balance sheets have ballooned. In aggregate, the balance sheet of the Bank of England, Bank of Japan, European Central Bank, Swiss National Bank and US Federal Reserve has grown by: 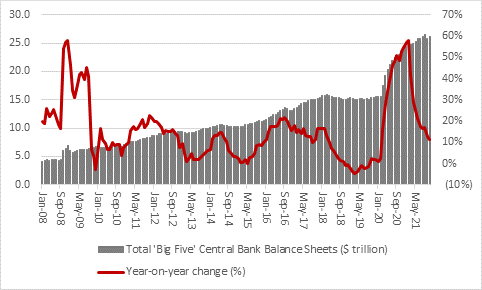 On the face of it, tighter policy makes sense. After all, do a 0.25% base rate and £895 billion of Quantitative Easing in the UK seem appropriate when the Office for Budget Responsibility is forecasting 6% GDP growth, 4% inflation and just 4.8% unemployment for 2022, at a time when house prices are rising at their fastest rate for 15 years, asset prices more widely are elevated, and parts of the financial markets are feeling positively bubbly?

The Omicron variant of covid-19 complicates decision-making and central banks are clearly weighing the danger of inflation on one side against the threats posed by unemployment, higher interest costs in a massively indebted-world and sagging asset prices (and perhaps thus consumer confidence) on the other. It is a difficult balancing act and one that will have huge implications for advisers’ and clients’ portfolios in 2022 and beyond.

There have been 106 interest rate cuts from central banks around the world this year, against just 11 increases, according to www.cbrates.com. However, only the Bank of England of the big five has acted here, even if the Fed, ECB and Bank of Japan have started to ease the pace at which they were deploying QE. Lowly interest rates and bloated balance sheets, thanks to QE, mean that policy is still ultra-loose – the monetary pedal is still very, very close to the metal.

Central banks will have to prove in 2022 that they are ahead of the curve and not behind it, if markets are to keep the faith in policies which have done so much to stoke risk appetite in equity markets and suppress bond yields in fixed-income ones for more than a decade. 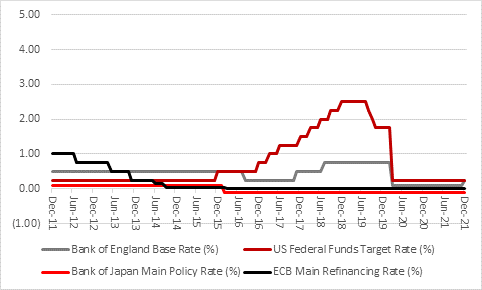