There’s no doubting the strength of the sustainable investment tide, as last year responsible funds accounted for around a third of overall industry sales. This year looks set to be even bigger, and on current trends will eclipse 2020 to post a new record for ethical fund sales. These funds still only make up around 5% of total assets, so there’s plenty of road ahead for ESG funds to eat the lunch of more traditional offerings.

Perhaps that’s why almost all fund groups seem to be beefing up their sustainable investment credentials, even for funds which look to be stretching quite hard for the ESG tag. The reality is that routine fund management practices can legitimately be characterised as ESG integration, they just never used to be called that. Even so, some of the resulting portfolios would likely leave sustainable investors scratching their heads as to why their money is being funnelled into oil companies and tobacco stocks.

The situation is not helped by a variety of approaches to ethical investing, with some funds simply tilting away from the worst ESG offenders, others entirely excluding them, and some funds actually seeking out companies having a positive impact on environmental and social issues. Industries themselves are also taking positive action to curb less palatable practices, for instance, BP is aiming to be a net zero company by 2050, and Philip Morris has committed to a smoke-free future. Some investors still won’t want these stocks, but for others, transitioning may constitute enough for inclusion in a sustainable portfolio. After all, the recent petrol pump crisis demonstrates most of us still use the products of the likes of Shell and BP, so why penalise them at the stock exchange but not the forecourt?

For the moment, the answer is for investors to do some extra homework when choosing sustainable funds and look under the bonnet to check that the ESG approach matches up with their expectations. Ethical investing comes with a wide variety of interpretations, both from investors and fund groups, and the key is for investors to select funds whose investment policies marry up with their own ESG principles. Given the significant number of ESG fund launches we have seen in recent years, there is at least an increasing choice available which helps investors do just that.

How have ethical funds performed?

The ethical tilt of these funds is just one stylistic bias at play in performance, however. For instance, the make-up of the UK market means ESG funds are likely to be skewed away from mega cap and cyclical names, because the top of the FTSE 100 leader board contains such a high weighting to oil and tobacco companies.

This is one reason why the performance differential between ethical and non-ethical funds is so marked in the UK, as in the last five years, mega cap stocks have fallen behind mid and small caps, and cyclical stocks have fallen behind growth stocks. First this was a result of Brexit, and then the pandemic. An underweight position in these underperforming areas of the market has therefore been a tailwind for ESG funds, though the wind direction could change if the market starts to reassess the prospects for more economically sensitive areas of the market, as it has done recently, most notably in the oil and gas sector.

In the US, by contrast, the biggest companies are the tech titans, which tend to score reasonably well on ESG measures. These have also driven the performance of the US market, and this likely goes some way to explain the very similar performance of ethical and non-ethical funds in this market, because the key performance drivers appear in both sets of funds.

Source: AJ Bell, Morningstar, total return to 26/09/2021, ethical funds are those which explicitly indicates any kind of sustainability, impact, or ESG strategy in their prospectus or offering documents.

Does this show there is an ‘ESG premium’?

The conclusion is that ethical investors have not had to sacrifice returns to satisfy their ESG principles in the last five years, and their funds have overall performed better than non-ethical peers. However, stylistic biases over and above their ESG focus have almost certainly helped to give them a boost over this period. This, and the fact that five years is a relatively small period over which to judge performance, suggests these numbers are not as yet evidence of any ‘ESG premium’ in fund performance.

The idea of an ESG premium is intuitively appealing. As more money is directed towards higher scoring ESG companies, that could drive the share prices of ethical companies higher, and lead to the establishment of an ESG premium in the performance of ethical funds. However, proving such a premium would also require a much longer time frame, and a wider data set than is available at the moment, and any analysis would at least need to adjust for differences between ethical and non-ethical funds in terms of regional allocation, sector exposure, charges, and the size of companies held within fund portfolios. Otherwise, other factors are likely to dominate the performance figures. For example, in the table above, over the last five years the decision whether to invest in the US or the UK has made a much bigger difference to returns than whether to invest ethically or not.

In terms of charges, ethical investors seem to be largely paying the same as their non-ethical counterparts. The exception is the UK All Companies sector, where annual charges are significantly lower among ESG funds. That could be a result of this being one of the oldest sectors and carrying a higher number of legacy funds with less competitive charges from a bygone era. Meanwhile, ethical funds which have been launched in the sector more recently have probably come to market with keener prices to pull new investors in.

The oldest ethical unit trust funds in the Investment Association sectors actually date back to the 1980s. It’s just that no-one’s really taken much notice of them until recently. The last three years have seen a step change in the amount of money flowing into responsible investment strategies. A lot of that is clearly driven by the climate change agenda, and heightened awareness of the negative environmental impact stemming from certain industries. 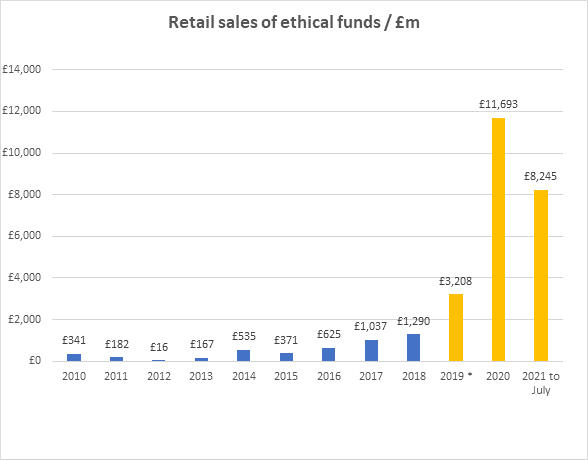 There’s also been a chicken and egg situation in regards to investor demand and industry supply. A pick up in interest from investors has led to a flurry of fund launches in recent years, which has then created more investor awareness and demand. A virtuous cycle has formed, swelling flows into the virtuous bit of the funds industry. We can expect this cycle to continue as fund groups put their marketing weight behind their new ESG offerings, and as the recently launched spate of funds gain three and five year performance track records, making them more saleable and attractive to investors, advisers and professional fund buyers. Around a third of fund sales so far this year can be accounted for by responsible funds, and the trend is reminiscent of the passive fund surge we saw a decade ago.

The chart below shows the ESG fund launches over the last twenty years (not including closed funds). Clearly the last four years have been a hive of activity, though actually 2012 was the year which has seen the most fund launches to date. That may well be because the start of automatic enrolment encouraged fund groups to mistakenly believe that a flood of pensions money would start flowing into ethical investment funds.

Most popular ethical funds of 2021 so far

Below are the five most popular ethical funds with DIY investors on the AJ Bell Youinvest platform in 2021 to date: