“The UK equity market seems unconcerned by the latest stumble in big technology stocks in the USA which dragged down the headline NASDAQ and S&P 500 indices on Tuesday night but it is interesting to note that it is cyclical and recovery plays, such as building materials play CRH, the miners, banks and plumbers’ merchant Ferguson which are leading the way. By contrast, long-term growth plays like Just Eat Takeaway.com and Ocado are lagging, alongside consumer staples companies like BAT and Unilever,” says AJ Bell Investment Director Russ Mould.

“This may be down to investors’ ongoing quest to find angles on how to play the economic upturn that they think will follow the pandemic, it may be down to US Treasury Secretary Yellen’s off-the-cuff remarks about how interest rates may need to rise at some stage and it may be down to gathering signs that inflation may be coming and not just temporarily. It may be down to a combination of all three.

“But whatever the reason, investors’ affections seem to be switching toward ‘jam today’ stocks – cyclicals that have underperformed for a long period of time and whose business models were hit hard by the pandemic, with the result that their share could be cheap just when they are primed to offer very rapid earnings growth from a depressed base. In crude terms, you could call these ‘value’ stocks.

“By the same token, investors’ long love affair with ‘jam tomorrow’ stocks may be waning. They are tech, biotech, social media, disruptive platforms and other firms whose business models are resilient to most economic conditions, even the downturn provoked by the pandemic, and that offer growth potentially well into the future (and may not make a profit or generate cash for many years to come as they grab customers). In crude terms, you could call these ‘growth’ stocks.

“This trend can be seen very clearly in the USA by measuring the performance of two exchange-traded funds (ETFs).

“The Invesco QQQ Trust (ticker QQQ) is designed to track the performance of the NASDAQ Composite’s index’s largest 100 non-financial companies and deliver that performance to investors, minus its running costs. The QQQ has $164 billion in assets under administration and its biggest holdings are Apple, Microsoft, Amazon, Alphabet, Tesla, Facebook and NVIDIA. It is therefore a good proxy for ‘growth’ and those firms whose business models have thrived during the pandemic.

“In the opposite corner we have the iShares Russell 2000 Value ETF (ticker IWN). It has nearly $17 billion of assets under management and follows a basket of 1,500 stocks that offer ‘value’ characteristics. Nearly three-quarters of the portfolio lies in the financials, industrials, consumer discretionary and real estate sectors – against barely 20% in the QQQ – and it has just 5% in technology, against 48% in the QQQ.

“Since the start of autumn 2014, when the NYSE FANG+ index was launched and the technology stocks and the FAAANM sextet of Facebook, Alphabet, Amazon, Apple, Netflix and Microsoft really began to come into its own, the Invesco QQQ is up by 233% and the iShares Russell 2000 Value ETF by 65%.

“But the iShares Russell 2000 Value ETF has been making much more rapid progress of late.

“And since the iShares Russell 2000 Value ETF bottomed on 9 July last year, the IWN is up 79% and the QQQ by 26% - so ‘jam today’, or ‘value’, has been outperforming ‘jam tomorrow’, or ‘growth’ for nearly a year. It’s just that hardly anyone notices, until we get days like Tuesday when big tech stocks take a bit of a pasting. 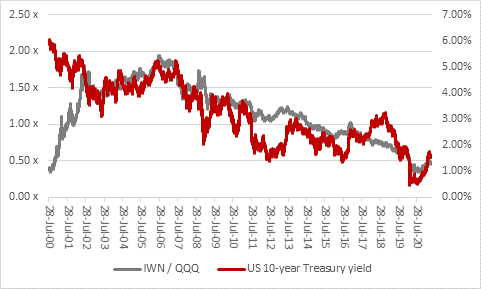 “Note the importance of bond yields here. Bond prices are currently falling – and yields rising – as investors price in the return of growth and possibly the return of inflation. A continuation of those trends could point to further outperformance from ‘jam today’ over ‘jam tomorrow’ stocks.

“This can also be seen if the performance of the IWN is assessed in isolation: 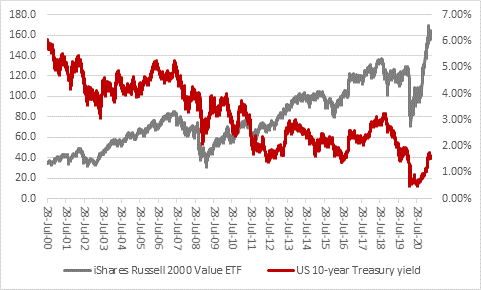 “This certainly poses a question to those investors whose portfolios are loaded up with tech and growth stocks, or actively-managed funds which specialise in them and also passive ones which just track headline indices.

“Any investor who owns an S&P 500 tracker, for example, is heavily exposed to tech stocks whether they know it or not.

“Between them, Alphabet, Amazon, Apple, Facebook, Microsoft and Netflix have an aggregate market cap of $8.4 trillion, equivalent to 24% of the S&P 500’s market cap. If they fall out of favour that could potentially put a bit of a lid on the US index, at least relative to other markets which are much more heavily weighted to cyclical, turnaround (‘jam today’) sectors – such as the UK and Europe. 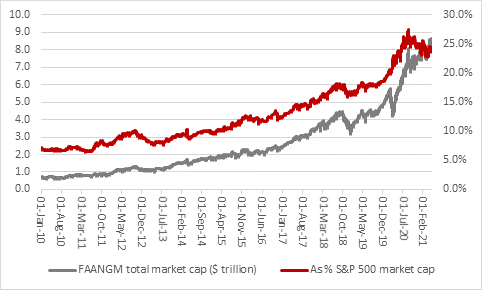 “A rip-roaring, inflationary recovery would be good for cyclicals and recovery plays, especially if inflation were to eat away at the value of any debt they have accumulated in real terms during the downturn.

“Yet the S&P 500 is up by nearly 50% if you exclude the FAAANM sextet, so there is some degree of good news priced into the ‘jam today’ stocks as well.

“If the inflation genie does come out of the bottle, after a 40-year period of hibernation, then investors may actually have to switch tack again, at least if history is any guide. In the 1970s, when inflation (or at least stagflation) was a genuine problem, ‘real’ assets – commodities and property – worked best as providers of wealth-protection for investors, along with paper claims on real assets (such as shares in mining companies).

“There is no guarantee that history will repeat itself but paper assets – shares – have outperformed real assets – commodities – hands down for a decade, as measured by the performance of the . If inflation really does rear its head, perhaps we are due for a turnaround there, too.” 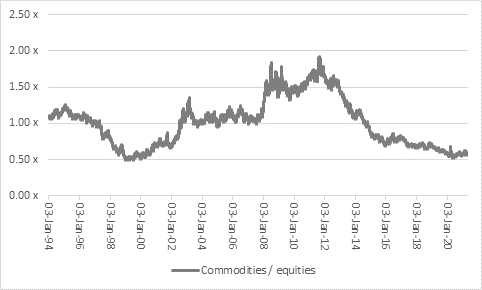 Source: Refinitiv data. Divides value of the Bloomberg Commodity index by the value of the FTSE All-World equity index.

What to do if one of your investments warns on profit

Want to invest in Asia’s best companies? This trust is a bargain

Investors should hitch a ride on Volex’s growth train

Can property ever replace a pension?