HSBC may have disappointed a few optimists who had been hoping for a first-quarter dividend, and BP unveiled a fourth straight year-on-year cut. But the oil major’s move surprised no-one, the bank dangled the possibility of an interim payment, and overall in April UK-listed firms that made or restored payments to investors hugely outnumbered those who cut them.

Payment declarations came to £3.1 billion, while a further £0.2 billion worth of dividends were restored, against just £0.8 billion of cuts (which was basically BP).

The aggregate of dividends paid and restored now exceeds the value of those cut or cancelled since COVID-19 swept around the world by over £20 billion, or more than 40%, to suggest that companies really do feel the worst may be behind us, in terms of the pandemic and the economic downturn.

Share buyback activity continued to accelerate, as well, to put even more cash in investors’ pockets. Four firms announced new buybacks schemes in April and two – Unilever and BP – hailed from the FTSE 100 and contributed the lion’s share of the month’s £3.2 billion tally.

Buybacks with a value of £7 billion have already been declared in 2021 overall and ten FTSE 100 firms – Barclays, Berkeley, Standard Chartered, Rightmove, Sage, CRH, Ferguson, NatWest, Unilever and BP – have got in on the act.

Uncertainty over new waves of the virus in India mean the scenario of a robust global economic recovery is by no means certain to play out, while the base for comparison on a year-on-year basis has passed its softest point.

Dividend cuts peaked last March as firms responded swiftly to the pandemic and the bulk of the damage, from the narrow perspective of investors and their portfolios, had been done by July.

The comparisons will get tougher from there and investors will then be back to measuring not whether a firm has cut, kept or restored a payment but how distributions measure up to analysts’ forecasts. 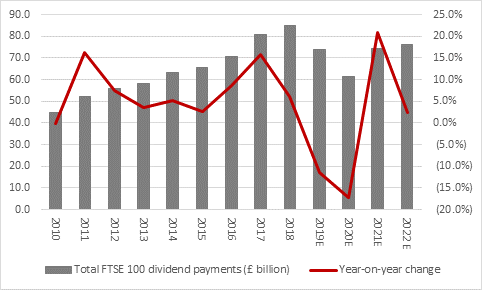 As the FTSE makes its latest attempt to crack and then pull away from the 7,000 mark, that equates to a dividend yield for 2021 of 3.7% - a figure which may appeal to income seekers, when their initial benchmarks are cash and the UK ten-year Gilt, where the Bank of England base rate is 0.1% and the current yield 0.85%. Better still, that 3.7% outstrips the year-on-year growth rate in the consumer price index and thus helps to protect savers’ wealth from inflation, which is running at 0.7% (and expected by many to rise further).

However, investors do need to ensure they feel that dividend growth forecast is reliable.

Three quarters of the anticipated dividend growth, or some £10 billion, is due to come from just ten of the FTSE 100’s members, so income-seekers who are looking to access the UK market via an index-tracker, for example, rather than individual stocks or an actively-managed fund, need to do their research on those names in particular.

This means the FTSE 100, and wider UK market, may be an option to consider for those investors who do think that a rip-roaring economic recovery is coming, or at least that inflation (or even stagflation) may be on the way.

History (in essence, the 1970s) suggests that under such a scenario investors may want to own ‘real’ assets, such as commodities, or at least paper claims on their producers via shares, while a steepening of the yield curve could be good for banks, whose shares still trade below book value (at least in the UK) thanks in part to fears of debt deflation and bad loans.

A surge in iron ore to a new record high and copper’s move toward its 2011 peak at least seems to bear out part of the bullish thesis for now. Both metals are key to the earnings – and cashflow – of BHP Group and Rio Tinto, the two biggest forecast contributors to FTSE 100 dividend growth in 2021.

By the same token, any investor who fears a double-dip recession, owing to the pandemic, global indebtedness or even dislocation in potentially (over)heated financial markets may fight shy of the UK for exactly the same reasons, even if bulls appear to be winning out over bears, based on the first four months of 2021 at least.

Ashtead rides the US recovery

Hospitality and Leisure stocks tumble ahead of Government Covid announcement