IMI share buyback takes total this year to over £4bn

IMI share buyback takes total this year to over £4bn IMI’s announcement of a £200 million cash return to its investors, alongside an upbeat trading statement, takes the total value of share buybacks announced in the UK this year over the £4 billion mark. A bounce in IMI’s shares suggest that shareholders are happy about the prospect of the windfall and the confidence in the future that it signifies.

Source: Company accounts. Not all buyback programmes and have been completed and some are still running, while other companies have yet to declare the intended value

There are four clear arguments in favour of share buybacks.

Yet there are critics of buybacks who view them as a prime example of how firms can seem to prioritise financial engineering and short-term returns over the sort of product development and investment than generate long-term ones.

Investors must therefore consider the four potential downsides that can come with buybacks.

History shows companies have a habit of buying stock back during bull markets (when their stocks tends to be more expensive) and not doing so during bear ones (when their stock tends to be much cheaper). Over £10 billion of buybacks were cancelled in 2020 in the UK, even though share prices were at their lowest – and thus valuations most attractive and buybacks likely to be more earnings enhancing. Companies are now ramping up buybacks after a 40% gain in the FTSE All-Share from its March 2020 lows.

This in turn exposes investors to the risk management teams are buying high rather than low could therefore question whether executives are sufficiently objective when they sanction a buyback to show the market they feel their stock is undervalued.

There is also the risk that firms buyback stock using debt, potentially weakening their balance sheets and competitive position in the long term (although the same danger lurks with dividends) or exposing them and their shareholders to a any unexpected shock. The share buyback programmes run by America’s quoted airline companies, as well as the FTSE 100’s International Consolidated Airlines, could be seen as examples here.

When it comes to buybacks, it may therefore be worth heeding the words of master investor Warren Buffett from his 2012 letter to shareholders in his Berkshire Hathaway investment vehicle.

Charlie [Munger] and I favour repurchases when two conditions are met: first, a company has ample funds to take care of the operational liquidity and needs of its business; second, its stock is selling at a material discount to the company's intrinsic business value, conservatively calculated.

Bearing this in mind, investors must therefore look at how a company buys back its stock.

The good news in the case of IMI is that the firm generates high operating margins, offers a healthy balance sheet and interest cover is good, so the firm’s finances are robust – and the figures are 2020 are pandemic-hit so that is a further good sign, although an even more stringent test would be take averages of these key ratios over a full economic cycle, or at least five to ten years, to ensure that they are not being flattered by a cyclical top or unduly depressed by a cyclical low.

Today’s trading statement also suggests that IMI will be funding the buyback out of cash flow rather than borrowing and management makes it clear that investment in growth, either organic or by means of acquisition, still comes first, which is a further positive sign.

Buybacks do seem to be coming back into favour. In some ways, investors’ desire to see ‘efficient’ balance sheets once more, that carry little, low-earnings cash, is remarkable just a year after they were craving financial solidity above almost all else. But the London-quoted Invesco Global Buyback Achievers Exchange Traded Fund (ETF), which aims to deliver the share price performance the NASDAQ Global Buyback Achievers index, plunged last year but has almost doubled from its lows, easily outpacing the FTSE All-Share in the meantime. 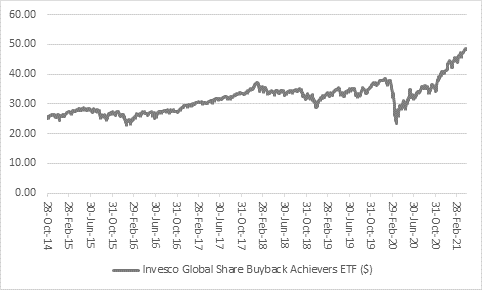 The NASDAQ Global Buyback Achievers Index represents a basket of firms which have reduced their share count through buybacks by at least 5% over the previous 12 months. Sixty percent of the holdings by value hail from America, 20% from Japan, 6% from Canada and just 2% from the UK, while by sector 26% comes from technology and 19% from financials.

Google parent Alphabet is a class investment right under your nose

Indian stocks push ahead on recovery hopes despite Covid crisis

How 4.4% yielding Drax kicked out coal and went green