Unchanged or increased payments from Smurfit Kappa, CCH, AstraZeneca and RELX in the past week mean FTSE 100 firms have declared dividends worth £5.2 billion in February, more than offsetting the £2.5 billion of cuts announced by BP and Shell. That provides some welcome relief to income-seekers and sets the scene for the Big Five banks, the first of whom to report will be Barclays on 19 February.

Regulators effectively forbade Barclays, HSBC, Lloyds, NatWest and Standard Chartered from paying dividends in calendar 2020, with the result that they cancelled their final or fourth-quarter payments for 2019 and any quarterly or interim payments for 2020 – a move which saved them around £14 billion in cash.

The banks protested that they had sufficient capital strength to pay dividends, although £20.3 billion in credit and asset impairments in the first three quarters of 2020 may have ultimately warranted the Prudential Regulatory Authority’s cautious approach. 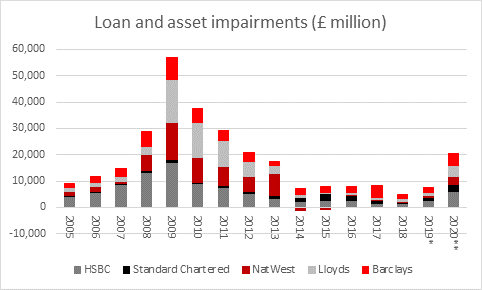 Impairment charges plunged from £10.6bn in Q2 2020 to just £2.3 billion in Q3, but fresh lockdowns in Q4 and then Q1 2021 may mean the banks tread carefully when it comes to their dividend declarations for calendar 2020 and any targets that they set for 2021.

Even so, every one of the Big Five is expected to declare a dividend for last year and offer an increased payment in 2021. 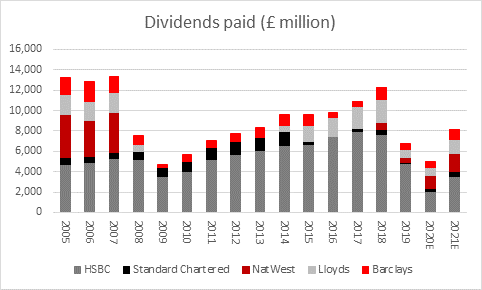 The banks’ ability – and willingness – to return capital to shareholders will to some degree depend upon their profits. Impairment charges for bad loans will be one factor to consider here, although at least conduct and litigation costs seem to be settling lower after the final surge in PPI claims in 2019 and restructuring costs remain relatively muted, with only HSBC showing an increase in expenses here in the first nine months of 2020.

A greater threat comes in the form of pressure on net interest margins, thanks to record-low interest rates, regulation, competition and central banks’ determination the world over to manipulate bond yields and flatten the yield curve as best they can. This makes debt more affordable for borrowers but the lower differential between the rate at which banks can raise capital (via customer deposits or wholesale debt markets) and the rate at which they can lend that out erodes their ability to earn a profit.

Loan losses and margin pressure mean the banks’ aggregate pre-tax profit is expected to more than halve in 2020, dropping to £11.7 billion from £26.3 billion in 2019. A strong recovery is expected, predicated upon lower loan losses, the view that global interest rates will not go negative and the global economy will show improved momentum as vaccine programmes are rolled out and the virus is beaten off. Even so, the banks have never returned to the levels of peak profitability shown in the boom years of 2006-07 and they are not expected to do so until at least 2023. 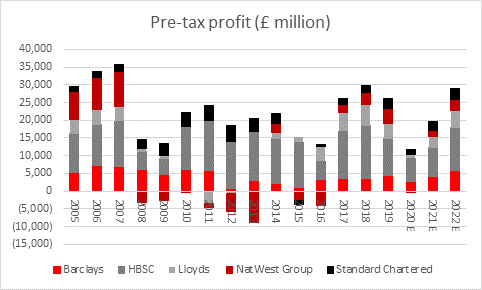 This may help to explain why the banks look so cheap on paper, especially relative to the net asset value (NAV) or book value per share figures. Analysts and investors are clearly still concerned by the risk of negative interest rates, record (and rising) global debt burdens, competitive from nimbler fintech rivals and the prospect of ongoing regulatory scrutiny.

As such, the banks could be cheap for a reason and to persuade investors that their shares offer value – and are not simply value traps – they lenders must demonstrate that they can sustainably improve returns on equity or that the asset valuations are completely reliable. A drop in asset impairments in the coming year would at least help on the latter front.