First GameStop, next up silver seems to be the message on social media as the precious metal’s price hits a six-month high at just under $29 an ounce and traders look to storm a new market.

Whether it will be quite so easy to shunt around silver as it was GameStop remain to be seen, especially as Nelson Bunker Hunt and his brothers came a cropper in 1980 when they tried to corner the market for the precious metal, losing billions in the process. Regulatory intervention to cut the degree to which borrowed money (or ‘leverage’ or ‘margin’) could be used to buy silver did for the Hunt brothers and regulators may again find themselves having to address this issue, alongside the use of derivatives, should anyone lose a packet this time around as well.

You can understand why silver is attracting the attentions of the social media traders who are looking to vent their fury upon, and profit from, short sellers. Allegations about, and fines for, investment banks rigging precious metal markets have abounded for some time. More fundamentally, money supply is surging, markets more generally are watching carefully for any signs of inflation and precious metals are traditionally seen as a potential hedge here. 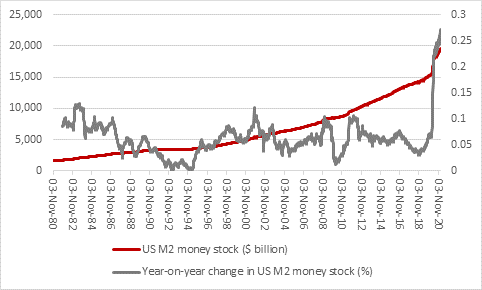 In addition, gold currently trades at 70 times the silver price, against the long-run average of 58 times, so on paper silver is the cheaper of the precious metals. This will be an interesting test of the conspiracy theories that precious metals prices have been kept artificially low. 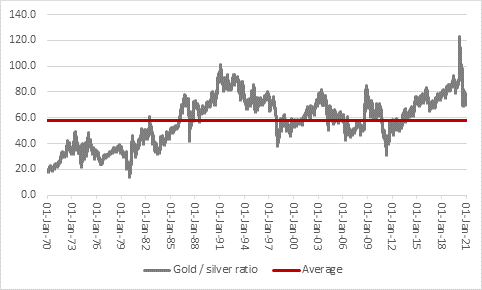 Whether the new-found silver traders find this market quite as easy to push around at shares in GameStop remains to be seen, especially as one very high-profile attempt to corner the silver market came to grief quite spectacularly in 1980.

The Hunt brothers – Nelson Bunker, Lamar and William Herbert – tried to buy up as much silver as they could, ostensibly to protect their wealth from the ravages of inflation (Nelson Bunker Hunt was once quoted as saying, ‘Almost anything is better than paper money. Any fool can run a printing press.’ This phrase may resonate with those who are worried about Quantitative Easing and ultra-loose monetary policy today).

They swooped on silver, driving the price up seven-fold almost $50 an ounce and by some estimates controlled a third of the freely available supply (excluding that which resided in government or central bank vaults).

However, industrial buyers of silver complained about the increase in their raw material costs and regulators decided enough was enough. On what became known as Silver Thursday, in March 1980, what was then known as the COMEX (or New York Commodities Exchange, now part of Chicago’s CME Group) moved to limit how much silver could be bought on margin, or using borrowed cash, under the new Silver 7 rule. 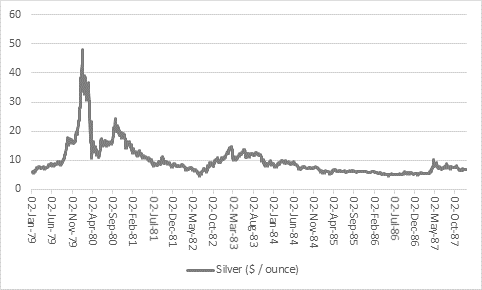 That stopped even the fabulously rich Hunt brothers (whose trophy assets include champion racehorse Dahlia and the NFL’s Kansas City Chiefs team) in their tracks and silver promptly plunged, amid a welter of recriminations, lawsuits and fines. It would regain the highs to which the Hunts had driven it only some 30 years later in the wake of the Great Financial Crisis. The Hunts’ business empire eventually collapsed under the weight of its losses on silver.

It might not come to that this time around, as ultimately the best cure for high prices is high prices. In the end some traders somewhere are going to want to take a profit on GameStop or silver and someone is going to left holding the bag – at least one unfortunate person must have paid the top tick in GameStop at around $470 and be sitting on a loss. All short squeezes have an element of a pyramid scheme about them as they need new money coming in to maintain the upward price momentum (and also give early movers a chance to book their profits and move on).

If that doesn’t work, there will doubtless be talk of perhaps financial transaction taxes or capital gains taxes to try and cool the market. The track record of such measures taking the steam out of a bubbly market is pretty poor – talk of capital gains tax on investments or trading positions only held for a short period of time actually spurred on the Japanese stock market and property bubble of the 1980s as sellers held on to avoid the levies and new buyers kept piling in for fear of missing out.

An interest rate increase would probably give everyone a jolt but the wider tantrum that would cause across financial markets and the effect it could have upon the real economy means central banks are unlikely to take that risk even if they decide markets are becoming unduly febrile. Fed Chair Jay Powell ducked the issue when asked about it after a speech last week and he will have doubtless remembered how useless the warnings about ‘irrational exuberance’ from one of his predecessors, Alan Greenspan, proved to be in 1996. Share prices simply roared higher after a day or two’s pause.

Ultimately, regulators will only step in if any eventual correction in GameStop, silver or other short-squeeze vehicles leads to heavy losses, financial distress or wider market or economic turmoil. That is when sentiment will turn against financial speculation and ‘free’ markets will find their movement restricted, at least for a while.

History shows that the authorities only step in once the bubble bursts and the damage is done. Short sellers are often blamed, even if in the end it is speculative buyers who take asset prices to unsustainable levels that are ultimately at fault, but a market collapse does tend to prompt a policy response.

The collapse of the South Sea Bubble in 1720 eventually germinated Sir John Barnard’s Act in 1734, which outlawed both short selling and the use of derivatives products such as futures and options (and was only repealed over 200 years later).

A similar response followed the 1929 Wall Street Crash. That disaster had already prompted the establishment of the Securities and Exchange Commission and the passing of the Glass-Steagall Act, which separated investment banks from retail banks, and laws were also passed to limit the amount of ‘margin’ that could be used to 50% of the value of the underlying stock (thus limiting leverage to 2-to-1). Dodd-Frank in 2010, or the ‘Wall Street Reform and Consumer Protection Act’, obliged banks to hold more capital on their balance sheets, limit their exposure to hedge and private equity funds and also limit their derivative books.

But derivative markets continue to mushroom and so does the use of margin debt – the latter once more stands near record-highs according to data from the New York Stock Exchange. 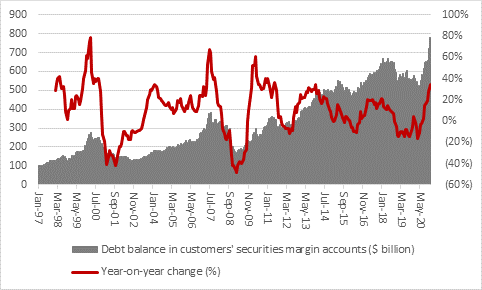 That could be helping to fuel markets now – although the S&P 500 lost a little ground in January – but history shows that confidence soon evaporates if the market stumbles and you could argue that the liquidation (forced or voluntary) or positions bought on margin accentuate any subsequent market decline. 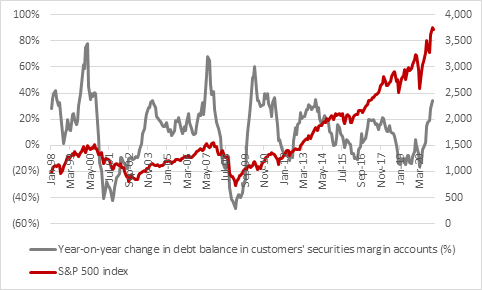 It is here that the greatest dangers may lie today, in these over-the-counter, lightly regulated, trillion-dollar markets which are funded by leverage. Financial innovation, coupled with central-bank provided liquidity, is creating trouble and eroding the stability of financial markets, which have blundered from one crisis to the next with ever-greater regularity in the last 30 years – from Orange County to the Tequila Sunset to Barings to the Asian currency crisis to the Russian debt crisis and LTCM to the tech bubble to the mortgage securities bubble and the Big Short and beyond.

Greater transparency and clarity in derivatives markets, and restraint of leverage, would be a good thing, although one major cause of the current surge in trading activity and speculation – record-low interest rates and QE schemes that are crushing returns on cash and forcing money to look for better returns elsewhere – is unlikely to see any major change in the near future. Central banks have a very difficult balancing act ahead of them as they try to do what they feel is right for the real economy without handing out too much rocket fuel to markets (which some would argue are already running uncomfortably hot).