Confirmation that ASOS is looking to buy certain assets from the fallen Arcadia group, notably Topshop, and Boohoo’s response that it is now the proud owner of Debenhams’ brands in readiness for launching them on its own online platform both show that the pace remains as relentless as ever in the world of fast fashion.

Both firms are looking to cement their market positions in what remains a highly competitive market while ASOS may also get the bonus of well and truly rubbing Sir Philip Green’s nose in it, after their spat of 2012 and the fallen retail magnate’s public declaration that Topshop didn’t need to use ASOS’ website to sell its wares because it had its own one.

of foreign bids for British firms in the wake of the 2016 Brexit vote), and also boost the earnings power of UK-listed firms that make most of their revenues and profits abroad. 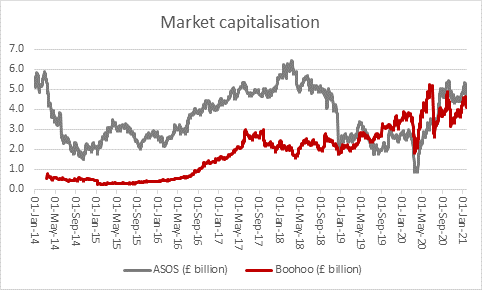 ASOS management team clearly believe that Arcadia’s Topshop, Topman, Miss Selfridge and athleisure brands still resonate sufficiently with value-and-fashion conscious shoppers, even if their heyday is a good ten years or more behind them. The Topshop name was top of the pile in the early 2000s under the guidance of brand directors Jane Shepherdson and then Mary Homer and it may still have enough cachet for its fortunes to be effectively revived. Miss Selfridge could develop a nice niche for itself with the proper levels of investment and backing, as the brand caters well for the squeezed middle (in terms of both income and taste between fast fashion and high end). Quite where this leaves the Dorothy Perkins and Burton names is unclear and ASOS will not have any interest in Arcadia’s store estate either.

ASOS already sells Topshop clothes via its own website and clearly feels there is more business to be done here.

In addition, a successful cherry-picking of Arcadia’s assets may bring satisfaction to ASOS’ management team in another way.

ASOS and Arcadia became involved in a spat back in 2012, when Sir Philip Green accused his online-only rival of unfairly piggy-backing off the Topshop brand by selling second-hand clothes via its platform. At the time, Sir Philip also made it clear that he had no intention of ever letting ASOS sell Topshop-branded product, since Topshop had its own website and did not need to use anyone else’s. Sir Philip went back on bended knee in 2019 when Topshop products were made available via ASOS, whose chance to now acquire the Topshop brand, in part laid low by its inability to move with the technological times (or Sir Philip’s unwillingness to invest and give it the chance to do so) may raise more than a few triumphant smiles in the AIM-quoted company’s Camden HQ.

ASOS’s is describing its discussions with Arcadia as exclusive, although there are reports that China’s Shein and the Issa brothers’ EG Group are waiting in the wings. The Issas have just acquired Asda and their decision to appoint Sir Stuart Rose as chair would make even more sense if they ended up buying assets from Arcadia. Baron Rose of Monewden, as he is now, was CEO of first Burton in the mid-1990s and then Arcadia itself at the turn of the century before he left to lead Marks & Spencer, where he fended off a bid from Sir Philip Green in 2004. Again, the chance to turn the tables might bring an added frisson to the perceived strategic benefits for EG Group from the purchase of any Arcadia assets.

Meanwhile Boohoo, having reportedly withdrawn from the race to buy Topshop, is now snapping up what it clearly feels is a bargain in the form of Debenhams’ own brand and the third-parties with whom it worked, such as Jasper Conran, John Rocha and Matthew Williamson.

Again, the physical store estate will be of no interest to the buyer but Boohoo clearly feels that migrating Debenhams’ online business to its own, superior platform offers considerable potential, thanks in part to the brands involved and also Debenhams’ strength in the beauty market. As a result, Boohoo now looks to be moving in on THG’s territory and develop a presence in the homeware and sports markets for good measure, although this initiative will leave Boohoo fighting on many more fronts.

All merger and acquisition deals bring risk, starting with the price paid and then any initial investment required to ensure the target is capable of doing what it is supposed to. But the real trouble starts with most deals when the acquirer takes on two new variables at once – a new business or industry and a new geography, for example.

In Boohoo’s case, the purchase price does not look lofty but it the deal does potentially represent a move into several new markets at once. Analysts may therefore question whether it would be better off sticking to fashion, as it has quite enough rivals there already, in the form of ASOS, H&M, Zara and many others besides.