easyJet joins British Airways as it gets state-backed bailout

easyJet joins British Airways as it gets state-backed bailout Few industries have been as hard hit during the pandemic as the airline business and its leading players are still scrambling for months to shore up their finances so they can come through the turbulence unscathed. easyJet’s management and shareholders will therefore be very grateful for the new, five-year £1.4 billion loan provided by a group of banks with a partial guarantee from the Government-backed UK Export Finance (UKEF). This will supplement the cash the company has raised for itself, via June’s £409 million share placing, the sale and leaseback of aircraft and new debt facilities and provide it with additional breathing room as it awaits the return of passengers to the skies.

British Airways has already received £2 billion in fresh loans from banks with the partial backing of UKEF as the Government does what it can to support the airline business, although quite what Virgin Airlines, Ryanair and other rivals think of this is not hard to imagine, as they are likely to be livid.

Ryanair’s Michael O’Leary has regularly railed against the state aid handed out to European airlines such as Lufthansa, which got €9 billion from the German government, including a direct equity investment, and Air France, which received over €10 billion from France and the Netherlands in the form of direct loans and guaranteed loans.

Such assistance will make it harder for Ryanair to make the market share gains it wants to make at the expense of failing, or at least, flailing rivals, even if a number of European airlines have folded, including Monarch, Thomas Cook, Wow, Primera, Aigle Azur, Adria and FlyBe.

All of those went under before the pandemic, however, weighed down by overcapacity in the airline industry and European governments have since stepped in to bail-out airlines that were economic before the twin blows dealt by the virus and subsequent recession.

Such support, company self-help schemes and the prospect of a recovery in economic activity and air travel as vaccination programmes mean the S&P Global 1200 Airlines index has more than doubled from its May 2020, adding over $60 billion in market cap in the process. 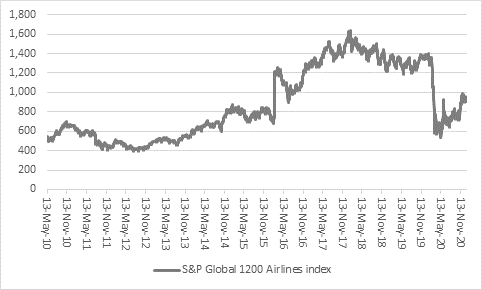 In some ways it is remarkable that the S&P Global 1200 Airlines index has lost only $30 billion in market cap over the last year, given that the industry lost $118 billion in 2020 after a 61% plunge in demand, according to data from IATA.

Airlines’ profit and loss accounts are very sensitive to even minor changes in pricing or passenger volumes, let alone the huge drops in the number of flyers, especially business travellers, seen in 2020: Heathrow (a hub which easyJet does not use) has just announced a 73% drop in passengers for last year.

easyJet plunged into loss in its last financial year and analysts expect another trading deficit for the current one, which ends in September. Consensus is looking for a return to the black in fiscal 2022, but even 2023’s profits are not seen matching the peak of 2015. This may be partly due to the lingering impact upon consumer confidence and their willingness to travel in the wake of the pandemic, but it could also reflect how some airlines which could have otherwise gone out of business may still be lurking around, to the detriment of pricing across the industry as they scrap for business. 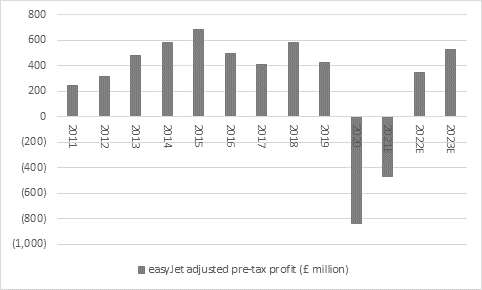 As such, financial assistance will be welcome, but it can have its drawbacks, too. easyJet’s share price peaked in early 2015, the year when earnings also reached their high, and they had begun to sag well before 2020’s pandemic and the recession. That partly reflected the impact of additional competition from new, low-cost rivals and the overcapacity that they brought with them. 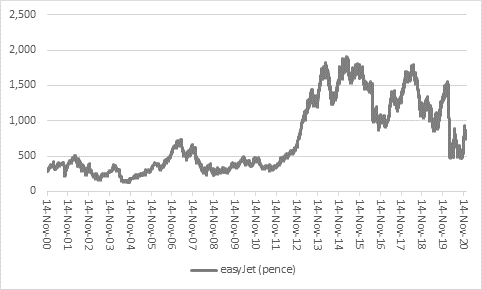 Airline stocks are back up and flying after last year’s huge air-pocket but long-term issues such as customers’ desire to fly and the effect of state-aid, direct or tacit, have yet to be answered. Investors tend to fight shy of industries where Government cash is involved, or available in size if required, as it can means money is allocated in ways that do not necessarily generate good returns on investment, as issues such as sovereignty or employment take precedence. Investors may therefore be enjoying the resurgence in airline stocks and a successful fight against covid-19 could prolong that but at some stage shareholders will have decide whether airlines are returning to type and becoming stocks to rent, during economic upturn, rather than companies to own across a full economic cycle because the industry’s long-term growth and dynamic justify such patient support.