Entain is pushing back on an all-stock bid from MGM Resorts and even the prospect of an approach partially funded by cash does not seem to be moving the FTSE 100 firm’s board to recommend the proposal. But money talks even more loudly in the betting industry than it does in others and it would be no surprise if the predator were to put a bigger wad down on the table with the result that another leading British bookmaking name – in this case Ladbrokes – falls into American hands, after Caesar’s Entertainment’s successful bid for William Hill. Entain’s shares have already shot past the proposed value of the MGM proposal, after all.

MGM’s offer of 0.6 of its own shares for every share in Entain equates to £13.83 a share or £8.1 billion and – like Caesar’s bid for Hills – the rationale for the deal is the would-be buyer’s desire to build its online capabilities as the US market continues to deregulate (in contrast to the UK where the rules are becoming ever tighter). MGM and Entain already work together in the USA, via a joint venture called Roar Digital. This works to promote the BetMGM brand, which uses Entain’s digital online platform.

Entain’s CEO Shay Segev, who took the helm after the unexpected departure of Kenny Alexander last summer, has targeted a long-term share in the USA of 15% to 20%. Entain believes the US online betting market could be worth $20 billion by 2024 and more than $50 billion over the long term, thanks to ongoin among others. 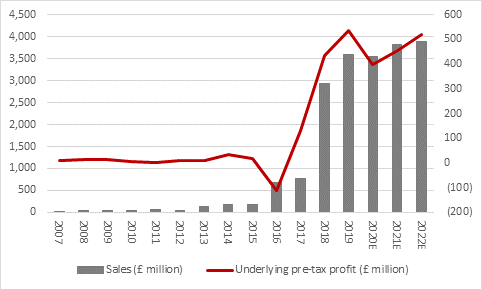 In 2018, America repealed 1992’s Professional and Amateur Sports Protection Act to effectively legalise betting on sports beyond the borders of Nevada by giving individual states the ability to tax and regulate this activity themselves.

Following the November 2020 Presidential election in the USA, when some states also held ballots on the legalisation of gambling at the same time, 29 states have legalised or introduction legislation to legalise sports betting and only three – Idaho, Wisconsin and Utah – have done nothing at all on the topic.

The rise of sports betting, online or otherwise, in the USA could be a boon for cash-strapped states who are struggling to cope with the economic shock inflicted upon them by the pandemic. Some states charge hefty initial licensing fees and all will look to pocket taxes as a percentage of gross gaming revenue for good measure, meaning that states, companies and investors alike could all potentially benefit.

As such it was no wonder that Cyril Stein famously said that he bought Ladbrokes back in the 1950s after a visit one of its High Street shops where he saw that three counters said ‘bet here’ and only one said ‘pay out.’

The 1960 Betting and Gaming Act and the 2005 Gambling Act opened up huge opportunities for betting shops and then online bookmakers with the result that gambling has become a huge industry.

Even if some fear it has become too big in the eyes of some, given regulatory pushback in the UK on advertising, maximum stakes on Fixed Odds Betting Terminals and the Government’s commitment to review the 2005 law, the shift online, then overseas and now deregulation in the USA has opened up huge opportunities for the betting industry and also transformed its shape.

In the 1970s and 1980s, the Big Four bookmakers who dominated High Street betting in the UK were Corals, Mecca, Ladbrokes and William Hill. Mecca bought Hills in the late 1980s and Ladbrokes merged with Corals in 2016 but the pace of change has massively accelerated as gambling has gone online and overseas markets have developed.

Caesar’s has now bought Hills and MGM Resorts has targeted Entain, while Bet365 and Flutter Entertainment (which brought together Paddy Power, Betfair and Skybet after 2020’s Stars Group merger) are the other members of the New Big Four in the UK.