The biggest event in the political calendar may just take place on 1 January when the Transition Period ends and the UK’s departure from the European Union becomes official – although at the time of writing the nature of the terms under which the UK will leave are unclear as a Brexit deal is yet to be struck.

After that, all eyes in Westminster, Edinburgh and Cardiff will switch to 6 May, the date for local elections in England, a vote for the Mayor of London, and the sixth polls for both the Scottish Parliament and the Welsh Senedd since their establishment in 1979.

October’s GDP data from the Office for National Statistics revealed that the UK economy was still 8% smaller in that month compared to February, when the pandemic had first begun to make its presence felt. The Confederation of British Industries and the Office for Budget Responsbility are currently in agreement that the economy will only get back to its pre-pandemic size by late 2022.

UK economy is trying to climb out of a deep hole 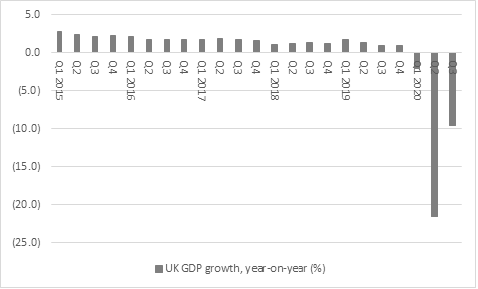 The Johnson Government has tried many different ways of providing support to those who needed it during the downturn, although there has been criticism from some that the cases the schemes provided were hurried, prey to fraud and insufficiently targeted, while others argue that more could have been done with regard to specific industries or geographic areas.

Whatever investors think of the Government’s initiatives, one thing is certain – the bill is going to be enormous. 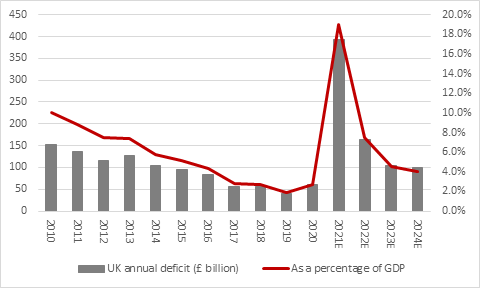 Despite this year’s projected £394 billion annual deficit, almost a fifth of GDP, which will take total UK Government debt over the £2 trillion mark and above 90% of total output, the Government continues to put forward big plans for infrastructure investment, especially in renewable energy.

At least it is getting some help here from the Bank of England, which in 2020 cut interest rates to a 326-year low of 0.1% and added substantially to its Quantitative Easing programme, taking to a new high of £895 billion. 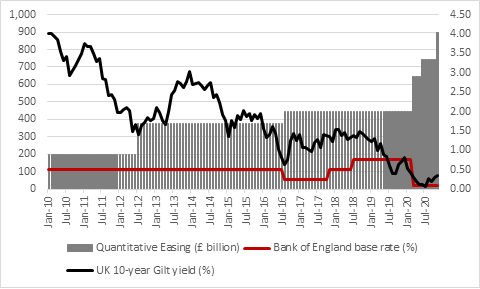 That has helped to keep the headline, ten-year Gilt yield at a nugatory 0.28%, despite the tattered state of the nation’s finances and means that Chancellor Rishi Sunak’s November Spending Review assumes that interest costs actually fall as a percentage of GDP, going and staying below 2% as of this year. Even so, some public sector pay freezes are on the cards and the debate over increases to capital gains tax or even a one-off wealth tax continues to heat up.

A total return of -9.4% in sterling terms from the FTSE All-Share may not sound bad for 2020, given the pandemic, recession and ongoing uncertainty over Brexit. But it nevertheless condemned the UK to sixth place out of the eight major geographic options available to investors and thus yet another year of underperformance on the global stage – only Eastern Europe and Latin America fared worse.

UK equities underperformed on the global stage again in 2020 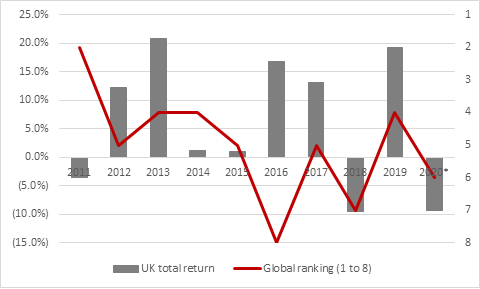 The FTSE 100 is back where it was in summer 2016, and still languishes below the peaks of 2007 and 1999, while the pound trades near five-year lows against the dollar and close to a ten-year trough against the euro.

There are more than enough variables to make second-guessing the markets even harder than usual. Given the range of potential global economic and financial market outcomes that could result from the pandemic, vaccines, geopolitical developments, elections, trade disputes, Brexit, Government policy and central bank policy, strategists and analysts could be forgiven for hiding behind Lao Tzu’s assertion that: ‘Those who have knowledge don’t predict; those who predict, don’t have knowledge.’

However, it is possible to look on the bright side. Underperformance means something is unloved and if an asset is unloved then it just could be undervalued. Someone, somewhere thinks there is value to be had in the UK, given the rash of late-year takeover activity that includes bids for firms such as McCarthy & Stone, G4S, Countrywide and even FTSE 100 member RSA.

The FTSE 100’s earnings mix also means the index could be a good recovery play, in the event the COVID vaccines do the business and global economic activity starts to pick up in 2021. Financials, in the form of insurers and banks, oils and miners are the biggest swing factor in consensus 2021 earnings and dividend forecasts for the index overall.

The consensus is looking for a more modest 19% increase in dividend payments, which is probably a good thing as it suggests boadrooms are not getting too excited too quickly and keeping a firm control of cash flow. 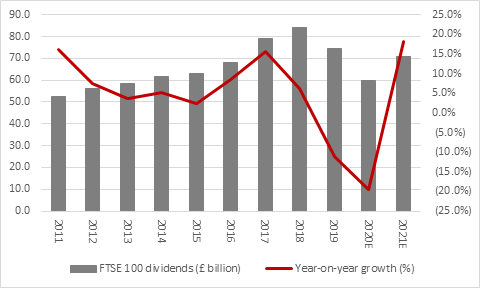 A persistent covid-19 virus and a double-dip recession are both major threats to any recovery scenario and thus the value case for the FTSE 100, even allowing for a forecast 3.8% dividend yield for 2021.

In addition, some investors may still fight shy of the UK because of the weighty influence of both oil and banking stocks , either for ethical reasons (in the case of the oils) or excessive global debts (in the case of banks) or simply in the view that both industries are simply a busted flush, as technological developments condemn them to the dustbin of history.