French diplomat Jean Monnet, one of the European Union’ founding fathers, once asserted that "Europe will be forged in crises” and 2021 could be an interesting test of that.

Even if the EU appears to have staved off a major clash with Poland and Hungary over its €1.8 trillion budget plan and €750 billion COVID recovery scheme, relations remain fractious with America (over trade) and Turkey (on most subjects), to name but two. In addition, Brexit still sits front and centre of the political stage.

Whatever happens in the negotiations which continue to drag (and could continue into the New Year), Brexit becomes a fact as of 1 January 2021. It is simply to be hoped that this does not mean London and Brussels find themselves locked together in combat over Brexit rather like Sherlock Holmes and Professor Moriarty were at the Reichenbach Falls in Switzerland when, at face value, they grappled and took each other over the precipice to the their mutual doom. In the end, Holmes survived but it is not clear who has the upper hand at the moment, or even whether a clear political or economic winner can emerge over time.

The Dutch general election scheduled for March will be one early test of the political temperature in the EU, but the biggest ballot of the year is due in Germany in October. Angela Merkel will step down as Chancellor after four straight victories and her Christian Democratic Union party needs to find a new leader before it contests the poll after the resignation of Merkel’s initial successor Annagret Kramp-Karrenbauer. A move to the left by the CDU’s coalition partners, the Social Democrats (SPD), further clouds the outlook, even if both will be looking to fend off the anti-EU, anti-immigration Alternative für Deutschland (AfD) party the autumn. This will be particularly the case after the AfD’s role in the election of the Free Democrats’ (FDP) Thomas Kemmerich as Minister President in Thuringia was one of the reasons Kramp-Karrenbaeur decided to step down.

As is the case elsewhere, the EU is struggling to contain the pandemic to its satisfaction and the economic hit from this and the lockdowns are proving considerable. The International Monetary Fund’s (IMF) latest edition of its bi-annual World Economic Outlook, forecasts a recovery in 2021 but a fairly tepid one that means it may take until late 2022 for the EU’s economy overall to get back to where I was before the virus reached the continent.

One huge complication for the economic bloc is the differing debt burdens borne by each country, which makes a one-size-fits-all policy response to the pandemic and the recession all the harder to formulate – or afford and fund. This will particularly focus minds in Berlin’s Reichstag and the Élysée Palace in Paris, where Germany’s election in September 2021 and France’s Presidential poll in May 2022 will have the CDU, whoever wins in 2021 leadership race, and Emmanuel Macron wondering how they can best hang on to power.

It seems a good bet that austerity will not be their first choice, even if debt is spiralling and fast, according to the latest data from the Bank of International Settlements. Although the ratios to GDP are not especially bad in a global context, the EU needs to get all of its members to agree to any proposed solution and that will not be easy, especially when Italy is already gently debating if not cancellation of debt held by the European Central Bank then at least a relaxation of the bloc’s existing fiscal rules.

This puts the onus back on the European Central Bank, where President Christine Lagarde is left to keep the plates spinning. As with other monetary authorities, the ECB is keeping interest rates at record levels and cranking up Quantitative Easing, this time under the name of the Pandemic Emergency Protection Programme. 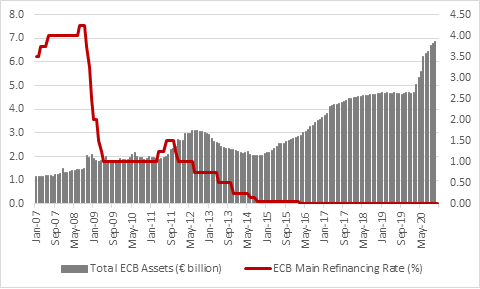 The ECB launched the PEPP in spring with a plan to buy €750 billion of European bonds. It increased that to €1.35 trillion in summer and then again to €1.85 trillion in December. The good news for the euro, or holders of euro-denominated assets, is that most other central banks are at it as well, so the currency is coming under little or no pressure – if anything it is ending the year on a good run against sterling and the dollar, which may be an indication of the fragile nature of the economic foundations in the UK and USA more than one of strength in Europe. 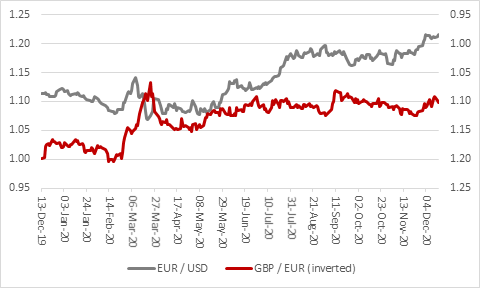 The pandemic, political uncertainty and Brexit made it tough going for European equities in 2020. Although they still eked out a positive total return in sterling terms for the year, the euro’s rise against sterling helped to put a sheen on things. That said, Europe still outperformed its dance partner in the Brexit negotiations so investors with heavy exposure in the region may at least take some solace from that. 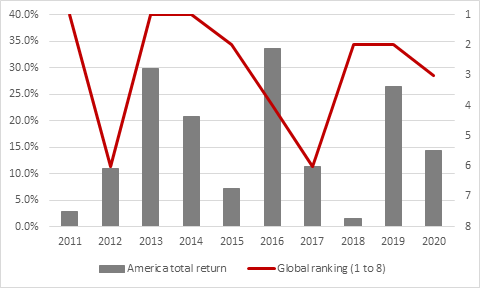 While the EU and UK’s relationship may about to become more distant after 47 years, their stock markets did show similar trends in 2020, in that perceived havens, pandemic winners and secular growth plays did best in the first half of the year and then cyclical, ‘value’ stocks roared back into favour in the second.

Overall for the year, the best performers in the Eurofirst 100 include payments specialist Adyen, telco and broadband play Iliad and tech stocks ASML and STMicroelectronics, firms perhaps seen as havens thanks to their secular growth potential, almost whatever the economic weather. From July onwards ArcelorMittal, Renault, Peugeot, Publicis and Airbus were among the leaders of the Eurofirst pack as investors looked to a vaccine, an economic upturn and sought out cyclical value and recovery plays rather than more expensive, secular growth plays.

Western Europe does therefore offer a good range of recovery plays, should the globe indeed start to return to something approaching ‘normal’ in 2021, as well as the huge list of banks, who will be permitted to start paying dividends again next year, albeit subject to strict limits. In theory, the lenders could be excellent ways of finding exposure to an acceleration in economic activity, as loan loss provisions recede, yield curves steepen and lending margins improve.

However, the ECB’s monetary medicine may be doing these patients more harm than good, especially since interest rates are not likely to go up in a hurry and the expanded PEPP is designed to keep bond yields low and yield curves as flat as possible. In this respect, Western Europe could still be seen as the next Japan, bedevilled by excess debt and weak demographics. The Bank of Japan’s three decades and more of zero interest rate policies and QE may have helped the country come through the hangover after the popping its equity and property bubble in 1990 and even if you do not think it did not make the headache worse, the BoJ’s remedy has simply hammered banking stocks into the ground, despite some stunning rallies (which ultimately failed). 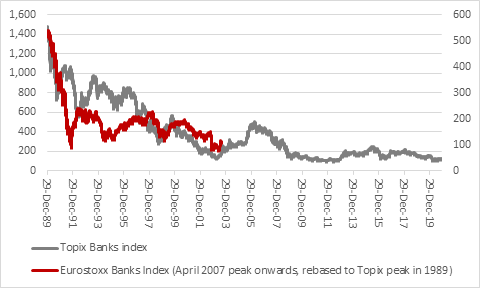 The Topix index is down by 38% from its 31 December 1989 peal but the Topix banks benchmark is still down by 92%. The Eurostoxx banks benchmark is down 80% from its 2007 peak so it is tempting to think the worst may be over (although one problem here is that the mathematical definition of a stock down 90% is one that fell 80% - and then halved from there).

The fragmented, brittle and sour-loan-dogged European banking sector is going through one of its periods when a wave of mergers is a hot topic, but the number of actual deals is few and far between, which may tell investors something. Although further efforts are being made now there remains the danger these talks are nothing more than attempts to conjure a raft from trying two bricks together.

These articles are for information purposes only and are not a personal recommendation or advice. Past performance is not a guide to future performance and some investment need to be held for the long term.