Azerbaijan and Armenia may have signed a truce with Russian peacekeepers but this was a rare example in 2020 of tempers cooling rather than fraying. The EU applied sanctions to Belarus over the sixth consecutive election victory for President Lukashenko, the US hit Turkey with sanctions after Istanbul’s $740 billion arms deal with Moscow and Poland and Hungary spent much of the year trying to block the European Union’s €750 billion budget for fighting covid-19.

Throw in a coup in Mali, a failed coup in Venezuela and the resignation and the impeachment of Peru’s President Martín Vizcarra and 2020 was nothing if not eventful. The coming twelve months are also going to be busy. Peru will get to vote for a new leader and elections in Bulgaria, the Czech Republic, Chile, Argentina, Uganda, Zambia, Chad, Gabon and Russia, to name but a few, will give psephologists, diplomats, economics and investors plenty to ponder. Hopefully Ghana’s peaceful December 2020 election, when President Nana Akufo-Addo was re-elected (albeit with a reduced majority) will set the template, rather than the ballot in the Cote d’Ivoire, which the opposition boycotted when President Ouattara used a constitutional loophole to run for, and win, a third term.

International Monetary Fund loans or grants to South Africa, Nigeria, Mali, the Democratic Republic of Congo and Yemen, debt defaults in Zambia, Ecuador and Argentina and currency devaluations in Cuba, Nigeria and Lebanon all show how the global recession that followed the pandemic took a vicious toll on many emerging economies. An early-year plunge in oil and other commodity prices, amid the demand-side shock and recession that followed the earliest stages of the viral outbreak, took a particularly heavy toll on Russia, Brazil and Mexico, as well as key Middle Eastern and African exporters of hydrocarbons.

Emerging economies are expected to bounce back in 2021

As in the developed West, many governments responded to the economic downturn with fiscal stimulus, monetary stimulus or a combination of the two. Russia increased state spending by a quarter, even as Government revenues fell by a fifth, as it launched a fiscal boost worth around 4% of GDP, while Mexico unveiled a $14 billion infrastructure plan designed to run through to 2024, with the goal of funding some 39 major projects, most of which will actually be privately funded. Some of this was part of leftist President Andres Manuel Lopez Obrador’s efforts to build bridges, metaphorically and literally, with a business community that he had previously alienated.

Meanwhile, central banks slashed interest rates in South Africa, the Czech Republic, Poland, Russia, Colombia, Hungary, Nigeria and Brazil, to name but a few. The Banco do Brasil took its Selic rate down to a record-low of just 2% as emerging markets’ central banks contributed to a global tally of 208 interest rates cuts, compared to just eight rate hikes. 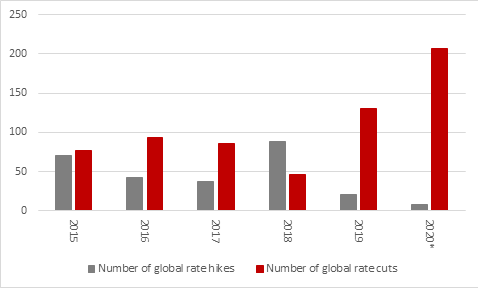 Such fiscal and monetary largesse, as well as vaccination programmes (despite Brazilian President Jair Bolsanaro’s bizarre suggestion that inoculation could turn people into crocodiles) underpin forecasts of a rebound from 2020’s deep economic downturn, although as in the West it seems unlikely that output will reach its pre-pandemic level until at least 2022.

However, another sign of the stresses and strains felt in 2020 is how all eight of those interest rate increases came from emerging economies: Tajikistan, Kyrgyzstan, the Czech Republic (which quickly changed course), Kazakhstan, Armenia, Turkey (twice) and Argentina.

Turkey had initially cut headline borrowing costs but its late-year policy switch means that it may be less of a potential accident waiting to happen in 2021. Economists feared the worst when President Erdogan sacked Murat Uysal from the post of Governor of the Central Bank of the Republic of Turkey after a one-third slump in the Turkish lira between January and November. But the new Governor, Naci Ağbal, has reached for a more orthodox playbook, swiftly hiking interest rates, despite the President’s historic dislike of such policies, and the lira has begun to stabilise. Fears of a default or capital controls, with knock-on effects upon other emerging markets, are thankfully receding, at least for now.

Interest rate hikes have eased the pressure on the Turkish lira – for now, at least 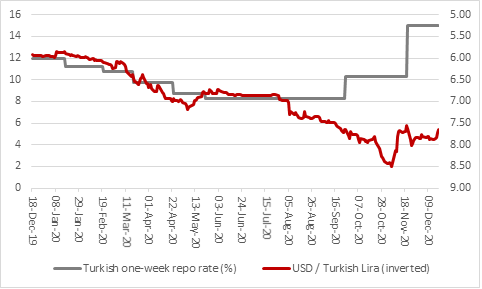 In a year that began with a major market panic and a big shift away from risk, perceived or otherwise, emerging markets have understandably lagged their developed counterparts. Among the eight major geographic options available to investors, the Africa/Middle East region ranked fifth in sterling-based, total-return terms in 2020, while Eastern Europe came seventh and Latin America eighth and dead last. (The sixth—ranked straggler, and the only developed market in the bottom half of the table was none other than the UK). 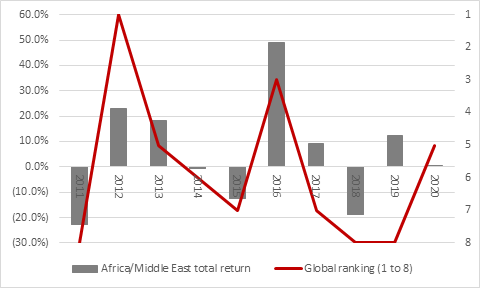 Eastern Europe stumbled after three market-leading years out of four 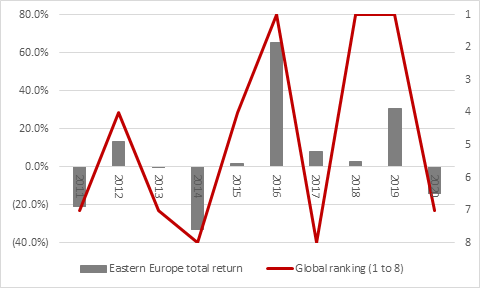 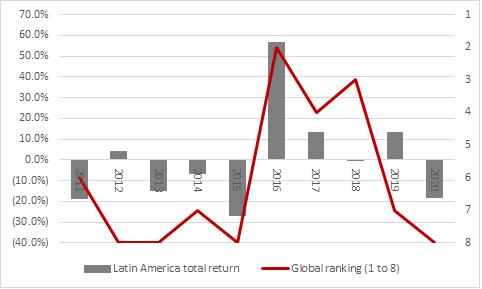 However, the picture may not be quite as bleak as it seems. Although emerging markets were shunned in the first half, they did forge a recovery in the second, as risk appetite began to improve, buoyed by fiscal and monetary stimulus programmes and hopes that the Pfizer-BioNTech, Moderna and AstraZeneca-University of Oxford vaccines, among others, will help to underpin a return to some degree of economic normality in 2021 and beyond.

In just the second half of 2020, Africa/Middle East ranked top and Latin America second, even if Eastern Europe dragged its heels by coming in ahead of only those negotiation-wracked laggards, Western Europe and the UK. 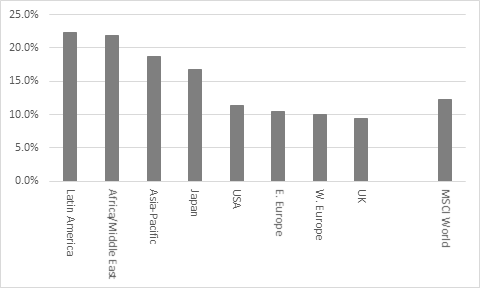 This switch toward emerging markets hints that investors are again looking for cyclical growth – ‘value’ for want of a better turn of phrase – rather than more reliable, trend, almost defensive progress – ‘growth’ - as well as global export and inflation plays, in the view that an economic recovery and perhaps even inflation may be coming.

Many an investor has lost money waiting for the return of both ‘value’ style-investing and inflation over the last decade or so, when a low-growth, low-interest-rate, low-inflation environment has seen long-duration assets, bonds and tech and biotech stocks beat short-duration assets like cyclical stocks, commodities and emerging markets hands down. But if we do get an unexpectedly strong recovery, this could change quickly, if the second half of 2020 is any guide, even though such a scenario may seem unlikely as the covid-19 case count keeps rising inexorably.

Two trends which became noticeable in the second half of 2020 and would help emerging markets in 2021 are dollar weakness and commodity price strength. While the past is no guarantee for the future, both have traditionally been harbingers of strong performance from emerging market equities.

A falling dollar, as benchmarked by the trade-weighted DXY (or ‘Dixie’) index helps emerging markets service their overseas (usually dollar-denominated) debts more easily, so the interest payments are less of a burden and the additional cash can be used more productively.

Emerging markets and the dollar have historically had an inverse relationship 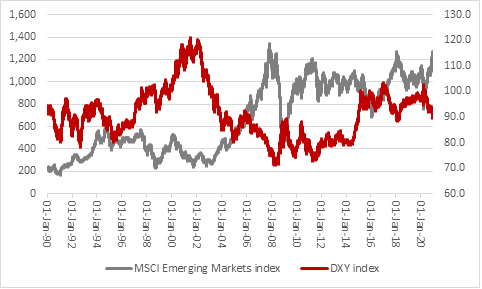 And while not all emerging markets are net exporters of commodities, some major ones, such as Brazil, Russia, Mexico and Saudi Arabia clearly are, so higher oil, metal or crop prices can boost income, employment and also inflows of valuable dollars with which to support their own currencies and again make any interest payments on overseas debt.

Strong commodity prices have historically been helpful for emerging markets 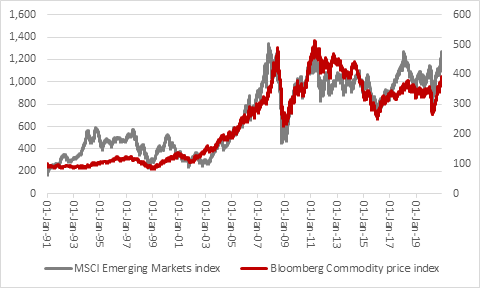